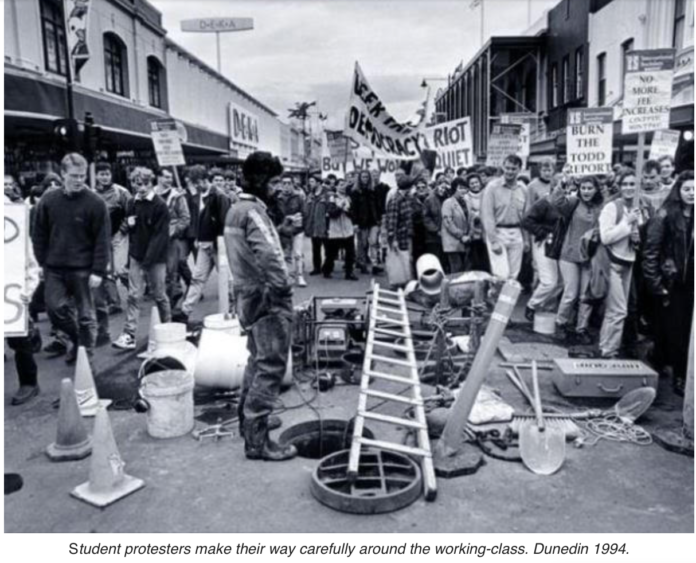 IT WAS THE LARGEST CROWD I had ever addressed – and it booed me. In 1990 the Labour Government of Geoffrey Palmer (look him up!) announced that university tuition fees would rise from $129.00 to $1,250.00 per year – an eye-wateringly 969% increase! Unsurprisingly, the news was not well-received by New Zealand’s 100,000 university students. In Wellington, the then Education Minister, Phil Goff, was mobbed by hundreds of angry students from Victoria University who followed him all the way down The Terrace hurling abuse. In Dunedin, students from the University of Otago turned out to protest Labour’s fee increase in unprecedented numbers. I was one of a large number of people invited to address them.

Why? Because less than a year before the Labour Party had split. Jim Anderton, followed by thousands of others, had abandoned the party of Rogernomics to form the NewLabour Party. The students’ association wanted to know NewLabour’s policy on user-pays education – and I – naïve fool that I was – told them.

It started well. There were cheers when I told them that the NewLabour Party was committed to providing a free tertiary education to every young New Zealander who wanted one: that Goff’s hated $1,250.00 fee would be scrapped. A more sensible aspiring politician would have stopped right there. For better or for worse, however, I did not fall into that category. Promising to abolish tuition fees was only part of the story, I told the assembled thousands. In order to fund free tertiary education for all, New Zealand would have to re-introduce the sharply progressive income tax which the Fourth Labour Government had dismantled. To make the first promise without making voters aware of the second would be dishonest. Zero student fees could only be paid for by higher taxes.

That’s when the booing started. I quit while I was behind – a sadder but a wiser man.

I was 34 years-old in 1990 – roughly fifteen years senior to the crowd in front of me. People were just beginning to refer to these youngsters as “Generation X” – Jacinda Ardern’s and Grant Robertson’s generation. Many of these kids would fight the good fight against user-pays education with energy and dedication right through the 1990s. Grant, himself, was elected President of the Otago University Students Association in 1993 and would go on to co-lead the national student organisation three years later. That said, I couldn’t forget those Gen-Xers’ cheers for free education, nor their boos for higher taxes. Neither, it would appear, could Grant.

Few economists and even fewer political journalists are predicting that Thursday’s Budget will feature a sharp rise in taxes. Envisaged instead is a massive increase in Government borrowing. Some younger commentators have worked out that the burden of repaying the enormous foreign debt this government is racking-up will be borne by them and their children – and they’re not happy about it. There is talk about extracting at least some of the repayment from older New Zealanders. After all, they argue, all of this uniting against Covid-19 has been for their benefit. The least they can do is give something up for the generations who will bear the brunt of the economic crisis which combatting the virus has precipitated. One of the Aussie bank economists has even, in the finest Shock Doctrine style, called for drastic action on superannuation, the retirement age, and untaxed capital gains.

Not wanting to provoke the election-compromising boos that such measures would elicit – not least from New Zealand’s most assiduous voters, the Over-60s – Grant is most unlikely to do any of those things. He, at least, is not so naïve as to waste all the election-victory-enhancing cheers which his Thursday promises to spend whatever it takes to get New Zealand out of trouble are certain to produce, by idiotically going on to explain how he intends to pay for them! Instead, he will reassure us of just how much scope for borrowing his prudent fiscal management of the New Zealand economy has provided. And there’s plenty of money on offer! In the immortal words of John Clarke (aka Fred Dagg) “If we stand in the queue with our hats off, we can borrow a few billion more.” Verily, we don’t know how lucky we are to have such a government.

Few New Zealanders see as clearly as John Minto what will be sacrificed to pay the vastly expanded mortgage that Grant is negotiating with overseas lenders. All the fine ideas about overcoming child poverty, humanising the welfare system, building state houses, tackling mental illness and doing something real about global warming will, to use Grant’s own words: “be put on ice”. If politics is the language of priorities, then almost without exception it speaks with a middle-class accent.

Because, in the subsequent hours and days – and years – in which I relived the humiliation of that booing crowd, I was finally blessed with the consoling insight that, big as it was, it represented only a very narrow slice of the New Zealand population. Moreover, it was not a slice that was ever going to welcome the news that its parents and, eventually, itself, would be called upon to pay, and pay handsomely, for the maintenance of the sort of society that offered all its young people a free tertiary education. That consolation came when I remembered that I was not the only speaker to be booed that day. The young Maori woman who spoke of the needs of her people, and of their just historical claims upon the resources of the Pakeha nation – they booed her, too.

The bourgeoisie, you see, has always been extremely keen on getting into heaven; but it’s damned if it’s ever been willing to die to get there. Always, that’s been somebody else’s job – somebody poor.