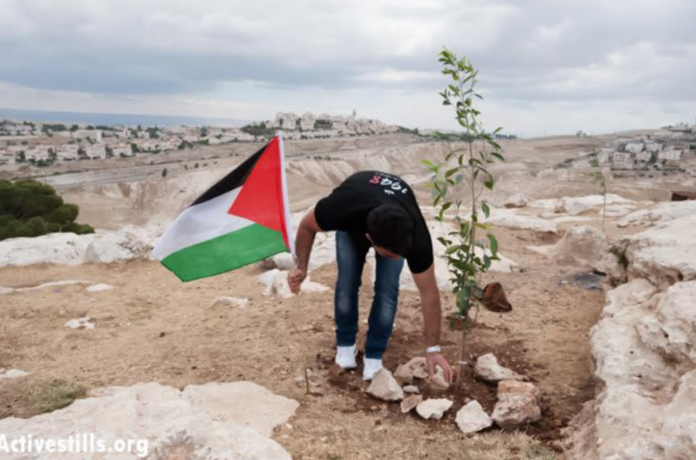 May 15, Nakba Day,  is an important date for the Palestinian people. It’s the day when Palestinians  commemorate their history and their culture. While Israeli nationalists and Zionist supporters celebrate the forming in 1948 of the State of Israel, the ‘Birth’ of Israel, Palestinians remember the Nakba , the catastrophe, ie, what was done to the indigenous people.

It’s a memory that the Israeli regime has tried to outlaw, to erase. Decades ago Israel deliberately renamed, ie ‘Hebrewised ‘, village and geographical locations. Some destroyed villages were covered over with pine forests, hiding evidence that people had lived there.

George Orwell has pointed out that,

“The most effective way to destroy people is to deny and obliterate their own understanding of their history.”

“Part of the main plan of imperialism… is that we will give you your history, we will write it for you, we will re-order the past…What’s more truly frightening is the defacement, the mutilation, and ultimately the eradication of history…”

The Israeli historian Ilan Pappé has coined the word  ‘memoricide’, to describe the Israeli efforts to erase knowledge and evidence of a Palestinian past.

The Nakba is more than a historical event. It is an ongoing process. The Nakba continues today as Israel continues to destroy houses, farmlands, schools ..yes schools too..in the West Bank and East Jerusalem…as Israeli snipers continue to shoot to kill or permanently maim, unarmed Gazan demonstrators, as Israeli forces  continue to attack Gazan fishermen and bomb Gaza.

Writer and journalist Ramzy Baroud says about the ‘birth’ of Israel,

” That blood-stained birth callously required the destruction of an entire nation; people with a unique history, language, culture and collective memory. It was thus absolutely necessary for the Palestinians to be wiped out to quell any possible sense of Israeli guilt, shame and legal and moral responsibility for what has befallen millions of dispossessed people.” “The Nakba is not merely a question of history, but an ongoing reality that has affected several generations of Palestinians. It is not a celebration of victimhood, but the impetus for an ongoing resistance. It is not an ‘event’ assigned a specific political context and analysis, but is now a state of mind; the Palestinian people’s strongest rapport between them and their past, present and future.”

The Palestinians, including the diaspora, have not forgotten  their history, their culture including their poetry, their music, their embroidery, their food.

Palestinian-Australian poet Samah Sabawi writes “My Palestinian identity was shaped by food and poetry” . “I write and I cook” she explains. “I create a Palestinian feast of delicious verses” , to remind her children “where we come from.”

The most famous Palestinian poet is the late Mahmoud Darwish. He articulated the hopes of his people.

“We Palestinians suffer from an incurable disease called ‘hope’. Hope for liberation and independence. Hope for a normal life where we shall be neither heroes nor victims. Hope to see our children go to school without danger. Hope for a pregnant woman to give birth to a living baby, in a hospital, and not to a dead child in front of a military control post. Hope that our poets will see the beauty of the colour red in roses, rather than in blood. Hope that this land will recover its original name:

Land of hope and peace. “

Do Palestinians still ‘suffer from an incurable disease called hope’? Now that Covid-19 is in Israel, in Israeli prisons,  in East Jerusalem, in the West Bank and in Gaza? Yes GAZA too.

What hope for the Gazans?

Maybe, just maybe, they hope that the outside world has learned  from the Covid-19 crisis is that we, global civilian society, are all  in this together.

Gaza must be helped, the siege must be lifted, NOW.

Let’s all hope that next year, NAKBA 2021, will be a day for Palestinians to remember how, at the darkest moment, a new belief and commitment to humanity was born.