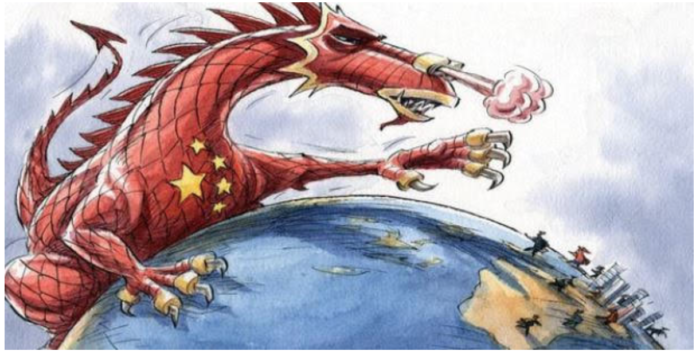 HOW SHOULD NEW ZEALAND make its way out of the Covid-19 crisis? More and more powerful and influential players are lining-up to answer that question. At stake is considerably more than the nation’s physical and economic health. Domestic policy choices cannot avoid having foreign policy consequences. Covid-19 has further deranged what little remained of the US-led post-Soviet world order. Faith in the American hegemon is faltering and the OECD Club’s fear of China is increasing by the day. Aware of the pivotal role the Chinese play in maintaining the global economy – not to mention their own – America’s European and Australasian allies find themselves torn between the equally urgent demands of their US patron and their own populations.

The situation in Australasia is particularly fraught. A major regional player, Australia stands resolutely alongside its American “mate”, dutifully repeating all of the United States’ foreign policy and defence lines. That China absorbs at least a third of all Australian exports is known by Canberra’s elites, but somehow this central economic fact of the country’s economic life is simply excluded from its diplomatic and military calculations. At some point – and perhaps quite soon – this central contradiction at the heart of Australian foreign policy will become critical. If Canberra chooses Washington over Beijing, then the Australian economy will tank. If it chooses Beijing over Washington, then Australia will be plunged into a profound identity crisis.

New Zealand’s economic wellbeing, like Australia’s, is dependent upon its exporters’ access to the Chinese market. Unlike Australia, however, New Zealand’s foreign policy establishment has so far managed to avoid taking a side in the growing stand-off between Washington and Beijing. Wellington is neither as diplomatically nor militarily committed to the United States as Canberra. As a consequence, it has substantially more room for diplomatic manoeuvre between the two great powers. In the present, highly volatile strategic environment, that confers a considerable advantage.

In Washington and Canberra, however, Wellington’s diplomatic manoeuvrability has become a source of considerable aggravation. It would suit the Americans and the Australians much better to have New Zealand safely and securely in the “ANZUS” tent. In geostrategic terms, a US-aligned Australasia is crucial to Washington’s new “Indo-Pacific” plan for containing China’s ambitious “Belt and Road” project. It has become a matter of some urgency, therefore, to facilitate a decisive shift in New Zealand foreign policy towards Washington and away from Beijing.

In conformity with the maxim that it is shameful to let a good crisis go to waste, the pro-Washington faction within New Zealand’s foreign policy establishment has persuaded the University of Canterbury to oversee a “pop-up” think tank dedicated to assisting the New Zealand Government “devise a resilience strategy that will ensure New Zealand’s independence and sovereignty are protected during the Covid-19 pandemic and after.”

The think tank has been “popped-up” by SSANSE (presumably pronounced “sanes”) an international research institute dedicated to exploring the challenges facing “Small States and the New Security Environment” (i.e. the world since Russia and China stopped playing nice). Based in Iceland, with funding from NATO, the institute would likely have passed without notice in this part of the world had it not been for the prominent role played in SSANSE’s activities by our very own Professor Anne-Marie Brady.

Professor Brady is, of course, the academic face of the campaign to reorient (if you’ll pardon the pun) New Zealand foreign policy away from Beijing and towards Washington. Alongside her fellow SSANSE directors and co-directors, Professor Margarete Šešelgytė, Professor Baldur Thorhallsson and Professor Alan Tidwell, Brady composes the “Editorial Board” of the new think tank. Its pitch is nothing if not portentous:

“The global environment has not been so challenging for New Zealand since 1942 when British forces in Singapore, who were New Zealand’s shield, fell to the advance of the Japanese. New Zealand must now face up to the national security risk of the Covid-19 outbreak. The current situation poses a risk not only to New Zealand, but collectively, for our Pacific, Five Eyes and NATO partners, as well as like-minded states who uphold the international rules-based order.”

With the Chinese clearly taking the place of the Japanese in this grim geostrategic scenario, and the “One Belt, One Road” project standing in for Imperial Japan’s “Great East Asia Co-Prosperity Sphere”? If New Zealand’s economic survival wasn’t at stake, this sort of re-heated Cold War rhetoric would be laughable.

Professor Brady is not, however, without powerful friends in high places. Not the least of whom is New Zealand’s Foreign Minister, Winston Peters. Since his in/famous “Georgetown Speech” of 15 December 2018, Peters has made it clear that he, too, favours redirecting New Zealand’s diplomatic effort away from the nation that takes the lion’s share of this country’s exports and back towards its traditional friends and allies – who don’t. The Foreign Minister referred to this reorientation as “The Pacific Reset”:

“The Pacific Reset […] reflects New Zealand’s response to the increasingly contested strategic environment in the Pacific in which more external actors are competing for influence. This calls for close cooperation with Pacific Island countries, Australia, the United States, and other partners with historic links in the region–countries such as Japan, the EU, UK and France–to uphold values that we share and want to promote in the region; values like democracy, good governance, greater women’s participation, and above all the rules based systems on which the region relies.”

There they are again, those “rules”. The same ones, no doubt, that sanctioned the illegal invasion of Iraq in 2003!

Was it just one of those incredible coincidences that the man who heads up the Center for Australian, New Zealand & Pacific Studies at Georgetown University (which hosted Peters’ visit) is none other than Professor Alan Tidwell, SSANSE Co-director and Professor Brady’s associate on the editorial board of the University of Canterbury’s pop-up think tank? No greater coincidence, I’m sure, than Professor Brady following Foreign Minister Peters on “Newshub Nation” last Saturday morning. If you missed it, Peters used the occasion to voice his support for Australia’s call for an inquiry into China’s mishandling of the Wuhan outbreak of the novel coronavirus we now know as Covid-19.

Australia is about to pay a high price for once again shouldering the burdens of America’s “Deputy-Sheriff”; and unless the growing influence of the pro-Washington faction of our foreign policy establishment is stopped in its tracks – so will we.