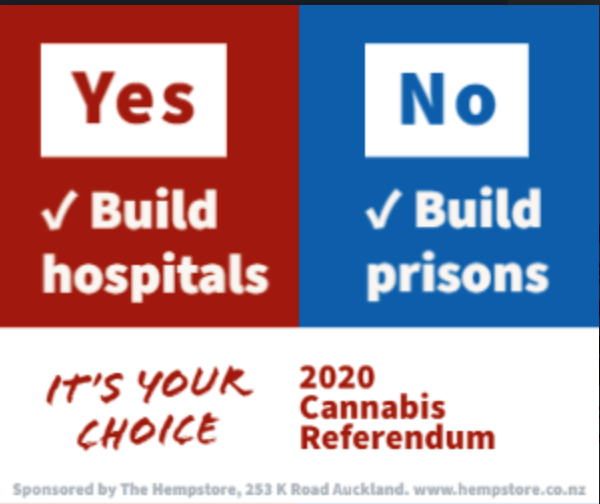 Among the many effects of the coronavirus pandemic was a postponement of New Zealand’s annual J Day cannabis celebrations. But on the eve of what I had hoped would be the biggest cannabis event ever seen in New Zealand, the Labour-led Government instead dropped the full and final version of the Cannabis Legalisation and Control Bill.

Everyone aged over 18 can vote on this Bill at this year’s general election. It comes after a recent poll found over half of Kiwis will vote Yes, another poll for Helen Clark found voters support legal cannabis when they know the facts, and a local economic think tank predicted a tax windfall of up to $490 million if legalisation is done right.

It is what we’ve been waiting for. It is an extremely well-crafted approach that strikes a really good balance, and it has everything needed to win the referendum – and then actually work when implemented.

Here’s what voting Yes would do:

The Bill contains a long list of details I won’t go into, but if inclined you can read all 154 pages here. You can also read good analyses from Russell Brown on Public Address, Derek Chang at grannie Herald, a thorough summary from Collette Devlin at Stuff, or just take it from me, this “reefer-endum” Bill is really good – and definitely good enough to win.

Many aspects had already been announced by Minister of Justice Andrew Little:

Additional details released in the final version of the Bill include:

o   represents or partners with communities disproportionately harmed by cannabis

Drug driving will remain an offence. Legislation for this is already before parliament and will take effect regardless of the referendum result, so that neutralises that concern. Medicinal cannabis and hemp are outside the referendum and will be regulated separately. However, it’s fair to say that for many patients access to cannabis products would become much easier and cheaper.

Who will (and won’t) benefit?

Well, under this model almost everyone wins. Access to cannabis will be legal yet controlled, medical access gets easier and cheaper, current providers aren’t locked out and can go legal, social equity provisions are built in, overseas corporates are blocked, micro cultivators have a place, sales taxes support increased health and education and don’t just disappear to a general government fund, our police get better things to do, and people will have legal options other than alcohol.

A Yes vote will take away money and influence from organised crime, and it will reduce the dominance of our alcohol industry, and the pharma trade won’t be part of this. There won’t be cannabis stores on every corner. There won’t be a Big Cannabis industry. and imports won’t be allowed. Vertical integration will be banned, and advertising prohibited, so those who banked on a big corporate approach may be ruing their bets.

Instead, this model supports local growers, producers and small businesses. Unlike the capital-intensive medicinal cannabis industry, hundreds of small businesses could be involved, and consumers will have access to a plethora of hand cultivated flowers and small batches of craft products, not just corporate weed grown in a giant warehouse.

We know what we’re getting

The parties that make up the current Government have pledged to make the result binding. They’ve put forward the Bill, so they’re obviously supportive of it. Notably, the final version of the Bill has not backtracked on any parts of the earlier draft.

I heard from many people who feared the provisions allowing limited home growing would be the first to be dropped if the Government came under any pressure. But it’s still there. Same with the daily purchase limit of 14 grams, which was the focus of much attention and waving of baggies of oregano. We can be assured therefore, that we will get what has been proposed (Technical aspects of the Bill may, of course, change here and there as it goes through the select committee process and parliamentary votes).

Meanwhile, National has refused to implement the result, no matter how people vote. National’s drug policy spokesperson, Paula Bennett, has long pretended to just be asking questions, sweetie, but has finally admitted she’ll be voting No.

If the current Government is re-elected, which seems a certainty, they will pass this pre-written Bill within a year. Licencing and production could take another year. It’s important this is done right: the legal market must compete with, and overtake, the illicit market in a careful way that does not create negative consequences.

I’m disappointed home delivery and mail order sites are still excluded. These would let conservative local communities “opt out” if they don’t want retail stores in their town, while retaining consumer access especially for those who find travel difficult. But I’m pleased this Bill encourages local and craft growers over booze-owned foreign corporates, and it lets those who have minor pot convictions enter the legal industry.

The Bill’s awesome new weapon is the addition of social equity principles. These were flagged in the previous draft but now we have specifics that address the concerns held by middle New Zealand and ensure people who don’t consume cannabis also stand to benefit from law reform – which is crucial to getting a majority Yes vote.

The Bill incorporates several aspects of the CHOISE model I developed in collaboration with other cannabis policy experts. These social equity aspects will let us right the wrongs of past policies. They include removing barriers to going legal, so that more people can participate and share any economic benefits – especially those who suffered most under harsh punitive law enforcement. Cannabis sales revenues will fund health and education rather than enriching foreign corporates. Social enterprises will be favoured over pure profits. There will be support for those at the bottom. Social equity makes legalisation work for everyone.

With the Cannabis Legalisation and Control Bill, the choice for voters could not be more stark: vote Yes and New Zealand finally gives it a go, with a model that restores privacy to what people do in their own home and limits commercialisation while spreading economic benefits widely, or instead vote No to support a failed model that criminalises young people and enriches organised crime.

Chris Fowlie is the CEO of Zeacann Limited, a medicinal cannabis producer; co-founder of the New Zealand Medical Cannabis Council; president of the National Organisation for the Reform of Marijuana Laws NZ Inc; co-founder of The Hempstore Aotearoa; resident expert for Marijuana Media on 95bFM; cannabis blogger for The Daily Blog, and court-recognised independent expert witness for cannabis. The opinions expressed here are his own.