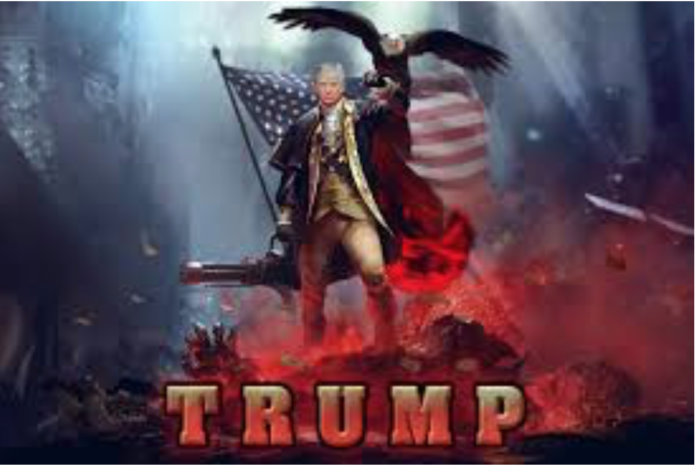 So there I was watching Trump’s latest train wreck of a Pandemic press conference.

They have become a must view daily ritual to fully appreciate the lunacy of where we are as a global community under lockdown. Comparing the cavalcade of circus freak garbage Trump vomits out and the clear laser like warm communication of Jacinda helps me appreciate how blessed we are on these Shaky Isles.

Nothing beats the utter insanity of Trump when he’s allowed to keep talking in front of an open mic, the arrogance of his intellectual bankruptcy can’t be unseen. The ONLY reason this hateful orange tumour manages to brainfart such spastic rational is because everyone else is too frightened to disagree with him.

He has the Mad King about him as he rants and raves against reality.

Watching him is like dancing madly on the lip of a volcano, at any second he could snap and launch a nuclear strike against wherever he thinks the virus is hiding. He is exhilarating the way Russian Roulette is.

The magical thing about Trump is that no matter how low you think his latest obscenity is, he ALWAYS manages to go lower.

The ‘Mexicans are rapists’ and ‘grabbing them by the pussy’ moments seem like the good old days when it comes to Trump’s pantheon of the grotesque.

The world collectively heard for the first time in Trump’s mad reign of ignorance  a ‘thud’.

The global reaction to Trump’s absurd ravings about injecting disinfectant to kill the virus ricocheted around the planet faster than one of Trump’s winged monkeys of a tweet.

…even Pierre’s Morgan has had enough…

President Donald Trump has “unfollowed” British journalist Piers Morgan after a public spat over Trump’s idea that injecting disinfectant could kill the coronavirus.

Morgan, a former winner of Trump’s TV reality show The Celebrity Apprentice, famously predicted Trump’s victory in 2016 and wrote, “It’s weird being friends with someone who suddenly becomes President of the United States.”

But Trump’s advice this week that scientists should look into injecting people with disinfectant to kill Covid-19 proved too much for Morgan.

In his Daily Mail column, he wrote: “By far the most reckless and dangerous thing President Trump has done is use the most powerful podium on earth to air his batsh*t crazy theories about how to beat the virus.

…the universal denouncement of saying something as insane as injecting yourself with disinfectant has been beyond anything Trump has previously done or said. The juvenile nature of the mere suggestion is shocking enough, having a President of the United States say it however is so dangerous in its ignorance, lives have actually been put at risk.

The safety caps and warnings on a thousand disinfectants and cleaners tell even the most unaware voter that what Trump is saying is dangerous bullshit. Trump supporters may not know where the Ukraine is on a map or feel conflicted over border clampdowns but they sure as hell know not to inject bleach!

I think Trump has finally hit rock bottom, his claim that he was just being ‘sarcastic’ is so puerile even Fox News have pulled away from him.

I suspect this moment makes Trump more dangerous and unhinged. His notoriously thin skin means this universal derision of him is the exact sort of trigger that could provoke knee-jerk policy tantrums from Trump.

Unfortunately Trump isn’t the only regime desperate for an outside enemy to target.

One of the dangers for the Chinese Government is their own population turning on their response to the virus. With a massive economic slump coming China’s way, those pressures will only build.

China wants to find an external enemy to focus the domestic population as badly as Trump does.

An Australian warship has joined the US Navy in a drill in the South China Sea as tensions rise again between Beijing, Malaysia and Vietnam over disputed waters.

The Australian frigate HMAS Parramatta and three US warships arrived this week close to where the Chinese government survey ship Haiyang Dizhi 8 is suspected to be exploring for oil.

A vessel operated by Malaysia’s Petronas state oil company is also operating in the area.

The joint navy exercises were likely planned for months in advance but the show of force comes amid accusations that China is exploiting the Covid-19 crisis to bolster its territorial claims in regional flashpoints.

Beijing angered its Southeast Asian neighbours at the weekend by creating two administrative units on the Paracel and Spratly islands – archipelagos claimed by multiple countries in the region, including the Philippines, Taiwan, Malaysia and Vietnam.

Hanoi issued a stinging rebuke, demanding that China respect its “sovereignty and abolish its wrongful decisions.” Vietnam has also engaged in tense standoffs with the Haiyang Dizhi 8 over its suspected oil exploration surveys.

Beijing’s assertive moves in the region, while many governments are distracted by their domestic battles to contain Covid-19, prompted the US to denounce its “bullying behaviour.”

…I have been warning that conflict will be an easy means for China and Trump to escape the current domestic threats to them and the ongoing speculation of the Wuhan Lab in the release of this virus will only help ratchet those tensions higher and higher.

We could have war before the US Election.