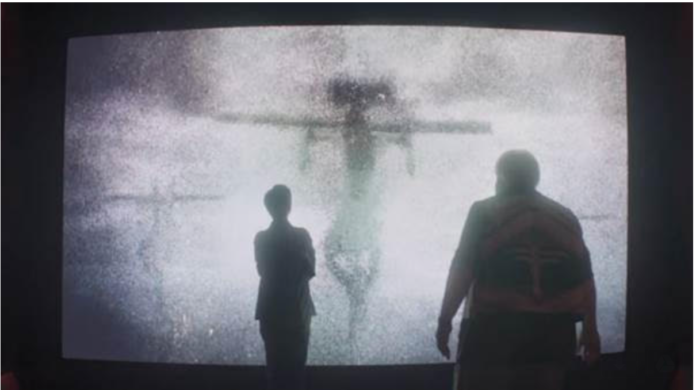 DEVS is a fantastic futuristic television mini-series – which ends next week on Soho. Now, don’t worry, there will be no spoilers in this post, so please feel free to read on. It’s certainly not giving too much away to say that in addition to serving up a riveting plotline and a first rate cast,Devs also offers master classes in both the future of information technology and philosophy.

Driving the drama forward is the age-old debate between those who believe that human-beings possess free will and those who insist that, since every effect must have a cause, our “choices” are entirely predetermined. Devise a computer of sufficient capability, Devs’ determinists insist, and not only will it allow you to see back into the past, but also forward into the future.

Once you enter this territory, however, the question inevitably arises: “Which past and which future?” The writer and director of Devs, Alex Garland, clearly anticipates that quantum computing and quantum physics are going to be inextricably entwined. This allows him to play with the weird paradoxes of the quantum world – like matter being in, and not in, our universe at the same time. These raise the possibility of there being more than one universe. Or many. Or even an infinite number of universes! If that’s the way it is, however, then wouldn’t it mean that an infinite number of pasts – and futures – are also possible? And wouldn’t it then follow, logically, that in this “multiverse” anything you can imagine happening either will happen, or, has happened already?

Here then, in the spirit of Devs, is one of the infinite number of histories of the Covid-19 virus and the global pandemic which it spawned.

In a biological research facility on the outskirts of Wuhan, in China’s Hubei province, scientists create a new, highly infectious and potentially deadly coronavirus. Unfortunately, lax handling protocols result in a number of the research facility’s staff becoming infected. With terrifying speed the virus spreads through Wuhan’s 11 million inhabitants. Alerted to its unchecked community transmission by a conscientious physician, the Chinese authorities are faced with a daunting series of choices.

The most noble choice is, obviously, to contain the disease within China’s borders and do everything possible to prevent it from infecting the rest of humanity. This option, however, is fraught with risk. What if the virus mutates into something even deadlier? What if it cannot be contained? What would such an outbreak do to China’s already faltering economy? How could the Chinese Communist Party preserve its power in the face of tens-of-thousands – perhaps millions – of fatalities? And what would China’s enemies do? Would they help? Or, would they stand back and watch the regime of Xi Jinping go under?

In the very large subset of worlds in the multiverse where this most ruthless sort of political calculation prevails, such questions tend to lead political leaders away from noble choices. This case was no exception. The government of Xi Jinping adopted a policy of strategic inaction. It delayed informing the World Health Organisation of the virus’s extraordinary infectiousness. More crucially, it delayed shutting down Wuhan, Hubei, and China itself, until the virus was safely aboard the world’s airlines and winging its way unheralded across the planet.

If humanity suddenly had to contend with a new coronavirus, then, from the perspective of Beijing, it was far preferable to have the whole of humanity contending with “Covid-19” (as it would soon be called) than only that fraction of humanity residing within the borders of the People’s Republic of China. To have protected the rest of the world – particularly its most powerful nations – from the virus’s devastating economic side-effects would have been indistinguishable from allowing China to be defeated in a major war. Sharing Covid-19 with the rest of the world made much more sense in geopolitical and economic terms than heroically bearing its burdens alone. Receiving the world’s praise is one thing; giving the rest of the world the whip hand over your country’s future is something else altogether.

Having allowed the virus to escape, it then behoved the Chinese Government to do all within its power to mitigate its effects and, if at all possible, stamp it out. Obviously, the first country to come out the other side of what was now a global pandemic would enjoy a tremendous advantage over all those other nations still stricken and locked down by the presence of Covid-19 in their populations. Certainly, China was not lacking in the totalitarian infrastructure necessary to contain and eliminate the virus among its own people.

Even in another universe, far, far away, it would not have taken long for those well-schooled in the realities of ruthless political calculation to grasp what China had done. Could they prove it? No. But proof is not always required when the logic of a particular course of action is so compelling. If every effect has a cause, then it is no great matter to work one’s way back through each successive stage of a crisis to locate the first move, the first “choice”, that set it in motion.

Small wonder that China’s principal rival, the United States is so agitated by the bind in which it now finds itself. It simply cannot afford to be locked down, but it lacks the totalitarian equipment needed to drive its population through the slaughter associated with acquiring “herd immunity” in the shortest possible time. Even if it did (and astutely exploited the Patriot Act offers a sufficiently ruthless American government tremendous scope) the United States has chosen, democratically, to afflict itself with its worst President ever. To look upon an America more riven with sectarian hatred and social division one would have to travel back in time to the Civil War of 1861-65.

If the Chinese Government operating in this alternative universe had been in possession of the time-mastering super-quantum-computer at the heart of the action in Devs, it could not have played its hand with more far-sighted political acuity. China took an “accident” (if you believe in such dubious concepts) and turned it into an opportunity to take over the world.

Not to worry, though. There are plenty of other universes where this didn’t happen. We might even be living in one.