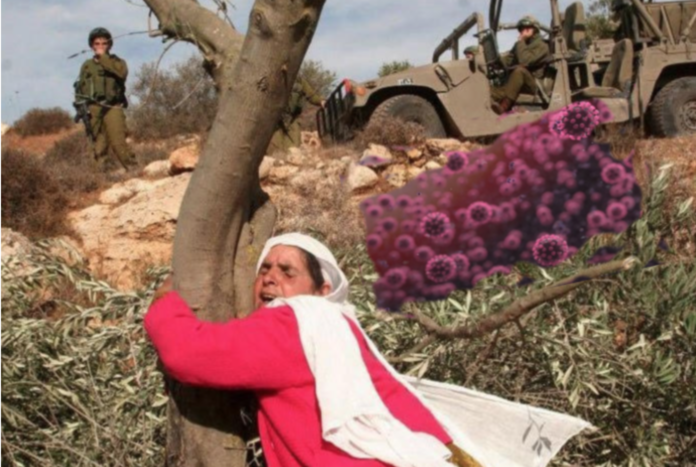 This month, up until 13 April, the Israeli Army had committed 54 Gaza ceasefire violations, including seven damaging incursions (the Israeli Army invades Gaza as and when it pleases), 15 attacks on Palestinian fishing boats, disabling one vessel and wounding three crew members. Besides this, Palestinian communities and agriculture came under Israeli fire every day. In addition to the damage and risk to life and limb that Palestinians are subjected to every day by Israeli forces, there is also a spiteful, petty side to Zionist violence that reveals, even more clearly, its hateful nature and true purpose.

For instance, on 11 April, the rooftops of Palestinian houses came under Israeli Army fire that damaged water storage tanks and the Army then went on to fire rubber-coated metal bullets, stun grenades and tear gas canisters at protesters. Already this month, Occupation forces have bulldozed a Palestinian olive grove, destroyed a livestock shelter and opened fire on Palestinian Covid-19 emergency workers who were checking the risk of coronavirus spread. On 5 April, Israeli aircraft sprayed toxic chemicals onto Gaza farmland and the Army pumped sewage into an area near the western entrance to Beit Jallah. As at 11 April, one Palestinian had died from wounds inflicted by Israeli Army fire, two had been beaten and six were wounded/injured.

On 5 April, militants from the Beit Hadassah Israeli Occupation settlement invaded the family home of Zidan Al-Sharbati in Hebron’s al-Shuhada Street and vandalised water storage tanks. They then hoisted an Israeli flag on the roof, in place of an existing Palestinian one, while yelling insults at the family and neighbours, as they trampled their way across the roofs of houses. On 12 April, Israeli settler attacks on Palestinian olive groves ruined hundreds of trees. On 13 April, two hectares of grapevines were destroyed when settlers, from the Israeli Occupation settlement of Gush Etzion, pumped the colony’s sewage, as well as toxic chemicals, onto Palestinian farmland in Beit Ambar. That same day at dawn, stone-throwing settlers raided the Dead Sea Wadi al-Darqa area, setting fire to two vehicles and pepper-spraying villagers. Also on the same day, saboteurs from the Yitzhar Israeli Occupation settlement bulldozed crops on Burin village farmland.

Reports of unwell Palestinian labourers, leaving their workplaces in Israel last month and being dumped at checkpoints along the Green Line, have sparked outrage. There is  video footage of an incapacitated worker, lying for hours on the ground outside a checkpoint, after being abandoned there by the Israeli Army. With Occupation forces hindering and acting aggressively towards Palestinian COVID-19 emergency workers, the situation can only get worse. Whenever Palestinians protest against such injustices, Israeli forces come down on them with ruthless violence to show who’s boss. On a much more positive note though, Palestinians do far more than protest. They also contribute a respectful alternative to the selfish power-hungry materialism that has brought the world to the present crisis of unprecedented danger.

Respect for the environment and each other

The environmental impact of the Israeli Occupation on natural diversity in Palestine is profound and its effects are well understood. With the support of Jewish Voice for Peace, Universal Unitarians for Justice in the Middle East, The Gralta Foundation, Alliance for water Justice, New Hampshire Palestine Education Network, the Palestine Institute for Biodiversity and Sustainability Research Centre works to conserve at-risk biodiversity.

The Institute’s Palestinian founder, Professor Mazin Qumsiyeh, also a US citizen, returned to Bethlehem with his wife, Jessie, in 2008. He is also a director of the Palestine Museum of Natural History at Bethlehem University and both the Institute and the Museum are leading producers of scientific research on biodiversity in Palestine. The Museum, embracing worldwide environmentalism, envisages the founding of a future in which humanity will recognise its place in Earth’s ecology and work for sustainability, in harmony with both nature and each other.

The main goals of the Museum and Institute are to research, educate and conserve the natural environment. In this pursuit, however, the effects of the Israeli military occupation cannot be ignored. The Museum in Bethlehem is in the centre of the Israeli Occupation and, as an engineer from Nablus who is a museum partner explains, it has to be more than a project about protecting the environment “because the environment is getting attacked by the Israelis.”

Even before the creation of the Israeli state, the Zionist enterprise was severely interfering with the environment with its introduction of invasive species, for example, pine trees. The needles from these alien trees have killed native plants and created havoc in the ecosystem. The draining of the wetlands of the Hula Reserve by the colonisers, alone, resulted in the loss of 119 different species.

In addition, pine forests have been used to cover and obliterate the remains of Palestinian villages, one example being Bayt Nattif, destroyed by Zionist forces during the Nakba (catastrophe). With forests standing where Palestinian towns and villages once stood, the Zionists made sure that those they had driven out would have nothing to return to. Israeli colonisers, desirous of territory cleared of its people, carry out planned strategic land-grabs, coupled with an imposed regime of enforced ‘permit‘ requirements that drive increasing numbers of Palestinians into a bleak existence in overcrowded urban enclaves. Reports of sick Palestinian labourers, leaving their workplaces in Israel last month, and being dumped at checkpoints along the Green Line sparked outrage. There is  video footage of an incapacitated worker lying, for hours, on the ground outside a checkpoint after being dumped there by Israeli forces.

According to the GlobalFirepower (GFP) 2020 review, “Israel fields one of the most capable military forces in the world – despite its size”. Very revealingly, GFP heads its report with a version of the Israeli flag that clearly reflects Israel’s military objectives.

Jews for Justice for Palestinians (JfJjP), based in Britain, is reporting about the COVID-19 situation in Palestine and Israel. JfJfP reports on a Palestinian shoemaker swiftly starting the West Bank’s only mask factory, a Gaza factory that once made children’s clothes that now manufactures protective medical clothing and also the Palestinian Al-Quds University in Jerusalem development and production of a fully-computerised, low-cost medical ventilator for COVID-19 patients. In addition, an interesting analysis from a Jewish Voice for Peace member, epidemiologist Rob Lipton, deals with the prospects for control of COVID-19 in Palestine.

The Israeli newspaper Haaretz has published news of an Israeli police raid on 14 April that shut down a Palestinian coronavirus testing clinic in the East Jerusalem neighbourhood of Silwan. There are already 40 confirmed cases of COVID-19 in Silwan and this assault was carried out, in spite of there being a serious shortage of coronavirus testing kits there.

The Palestine Museum of Natural History teaches how to live sustainably through a variety of techniques, including hydroponics and the perhaps less familiar aquaponic, which employs the waste from fish as food for bacteria that can then be converted into fertiliser for the plants that, clean and safe, can be returned to the fish. The system imitates the aquatic ecosystems found in nature.

Palestine has to deal with both alien military Occupation and climate change and the people will no longer accept being parted from their culture and history. Mazin Qumsiyeh says: “Our job here is mental liberation and freedom from mental colonisation.” The Palestine Institute for Biodiversity and Sustainability Research Centre and the Palestine Museum of Natural History are form of non-violent resistance that offer a rational future for Palestine, and the world.

In New Zealand, the Kia Ora Gaza movement, dedicated to “breaking the inhuman and illegal Israeli siege of Gaza” is calling for support for the Palestine Solidarity Network Aotearoa’s combined appeal to the NZ Government to call for Israel to end its blockade of Gaza and military occupation of the Palestinian territories and allow Palestinians to access the medical supplies and equipment they need to deal with the COVID-19 pandemic. The Kia Ora Gaza call includes a Palestinian Ministry of Health video press release about the conditions in the Gaza Strip.

Our Government needs to demonstrate consistency in upholding equal rights and international law, and – just as important – in holding to account anyone who breaks that law. The rules-based order, signed up to by the global community following World War Two, is today under severe threat and the NZ Government needs to actively defend it. Israel’s establishment as a sovereign state was secured through a process that denied the Palestinian people their right to freedom, self-determination and sovereignty.

On 16 April 2019, the UK Government at least acknowledged that “in line with relevant UN Security Council Resolutions, the Occupied Palestinian Territories (the West Bank, including East Jerusalem, and Gaza) are not lawfully part of the State of Israel. The UK does not recognise Israeli settlements as part of Israel. The UK’s position on settlements is clear. They are illegal under international law. . .”

Empty words though, without determined action, will never suffice in the defence of international law and equal rights. Our Government should set an example to the world by:

Today, Israel’s growing threat to unilaterally annex the whole of Palestine is undermining any remaining hope of a just peace. Zionist Israel must be brought to account!