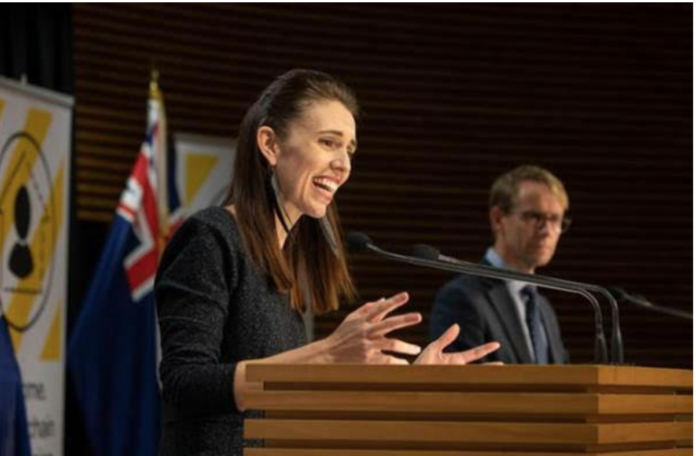 SO FAR, SO BLOODY FANTASTIC! All around the world people are watching the press conferences of New Zealand’s prime minister and comparing them to whatever you call those performances featuring the President of the United States. Imagine how decent, intelligent Americans must feel as they compare and contrast the style and the substance of these two very different political leaders. The experience must surely be as harrowing for them as it is affirming for us.

The cynics will object, of course, that it’s easy to be “nice” when everything is going well. Which is true. But, here’s the thing: New Zealanders’ experience of the Covid-19 Pandemic has been so much less fraught than the Americans’ because our system and our leadership rose to meet this extraordinary challenge and theirs did not. Our politicians and civil servants, acting together, and supported by the overwhelming majority of the people, made the right choices at the right time and for the right reasons – which is why everything is going so well. Better than many of us dared to hope.

If this was a movie, however, we’d only have been watching for about 20 minutes. The main characters of “Pandemic – The Movie” have been introduced and the best of them have risen splendidly to meet the script’s first big challenges. We’re all rooting for them – willing them to succeed. But, even as our identification with the heroes grows stronger, a little voice is reminding us that “Pandemic” still has 100 minutes left to run.

Because even if New Zealand succeeds in eliminating the Covid-19 virus – and that is still a long way off – our Prime Minister and her colleagues must meet the much larger and more daunting challenge of the virus’s economic consequences. The Treasury’s most optimistic scenario predicts an unemployment rate of around 10 percent as the New Zealand economy struggles to lift itself off its knees. Some economists are expecting as many as a third of this country’s business enterprises to fail. It is difficult to fully appreciate what this means in simple human terms: the collapse of so many hopes and dreams; the rising level of anxiety and despair; the dangerous casting about for someone or something to blame.

If the first 20 minutes of “Pandemic” have been inspiring, the next 60 are likely to be bloody terrifying.

How so? Because wrestling with an economic crisis is a very different proposition from managing a public health crisis. When it comes to the economy there is (as yet) no equivalent character to the steadfast and reassuring Director-General of Health, Dr Ashley Bloomfield. Economists like to think of their profession as a science, but it isn’t. “Political-Economy”, as people used to call economics, is a much more honest descriptor. It captures the central role which politics plays in how a society organises the means of production, distribution and exchange.

As Lenin rightly recognised, the whole complex business of how any particular society functions is reducible to just two one-word questions: Who? Whom? Or, as Leonard Cohen, rather less tersely, puts it in his song “Democracy”, economics is all about “the homicidal bitchin’ that goes down in every kitchen to determine who will serve and who will eat.”

People may be willing to let the scientific experts like Ashley Bloomfield, Michael Baker Siouxsie Wiles, and Shaun Hendy guide them through a medical emergency, but a willingness to be guided by the often conflicting advice of bankers, industrialists, trade unionists and academics, is much less likely. Convincing New Zealanders to “unite against the economic depression” will be several orders of magnitude more difficult that convincing them to unite against Covid-19. Unity against a potentially deadly coronavirus is much more easily achieved than uniting the rich and the poor in a common struggle to rebuild a collapsing economy. That will be a much more daunting task.

Daunting – but not impossible. Already emerging from the present crisis is a broad intellectual consensus that the answers to the questions Who? Whom? which the Powers-That-Be have for the past 35 years deemed acceptable will no longer suffice. The Covid-19 Pandemic has brought home to all people of good will the indispensable nature of the state. Not even the Global Financial Crisis of 2008-09 was sufficient to topple the ideological hegemony of neoliberal economics, but this latest global catastrophe has brought it crashing down.

And this time, the neoliberal economists and financiers know it. Their efforts at self-defence have, however, been spectacularly self-defeating. The reason for this lack of success is simple. At its core, neoliberalism is a sociopathic ideology, and sociopathology is, by definition, incapable of recognising its own core deficiencies: grandiosity, narcissism, amorality and a complete lack of empathy.

The neoliberal “solutions” to the present crisis reflect these deficiencies. Their protagonists simply cannot comprehend why ordinary decent people recoil in horror from their campaign to “save the economy” by allowing the old, the sick and the weak to die in their tens-of-thousands. People may not know much about economics, but they are still perfectly capable of distinguishing right from wrong. The howling moral vacuum at the heart of Neoliberalism has finally been exposed by – of all people – the neoliberals themselves.

Though finished strategically, the tactical response of Neoliberalism in extremis is certain to enliven the middle section of “Pandemic”. But, if Jacinda Ardern, Grant Robertson, and whoever emerges as the humane economist equivalent of Dr Ashely Bloomfield, can maintain the tone and poise displayed in the battle against the virus, then the battle against the economic crisis may unfold in an equally satisfactory fashion.

Then again, the Government may not need an economic expert. In his address to business leaders of 15 April, the Finance Minister, Grant Robertson, may have taken the burden of leading and explaining New Zealand’s economic recovery on to his own shoulders. These words in particular suggest that, in Robertson, the hour has met the man:

“The importance of the role of the state has been underlined by this crisis. I hold a strong personal belief in the power of the state to do good. It is through a well-funded, highly functional public service, that we have had the ability to coordinate and provide leadership for New Zealanders, guiding both the public health response and the economic response to this crisis.

“I believe it is of the utmost importance that the state continues to play an active part in the economic recovery, providing leadership and direction as we move forward through the challenging times ahead.

“Finally, I know that what we have asked New Zealanders to do in this crisis is huge. As we have all had to make sacrifices in doing our bit to stop the spread of the virus, so too will we all have a part to play in our economic recovery.”

It’s hard to imagine a better answer to the questions: Who? Whom? Especially since Robertson’s answer to both questions is the same:

It would certainly guarantee “Pandemic” has a happy ending.