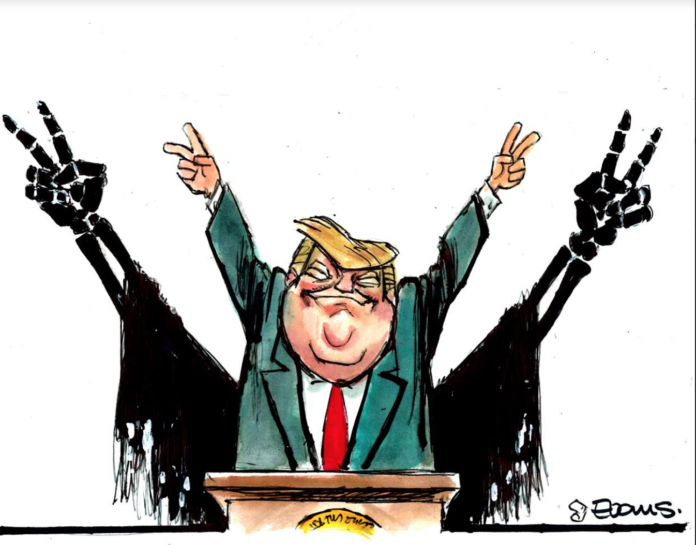 It would be difficult enough to deal with claims that 5G is spreading Covid19 or that it is a military designed bioweapon to impose a New UN World Order, but the explosion of conspiracy theories transmitted on social media haven’t been the most damaging virus misinformation, it has been countries themselves who have repeatedly lied, manipulated and hidden the truth of this pandemic.

The two countries dealing with the Pandemic most have both been the deepest pockets of deceit.

China has been deceptive...

The virus made its first appearance in a Wuhan “wet market,” an emporium (apparently common in China) that featured live and newly slaughtered animals in close proximity. SARS and avian flu are also thought to have originated in these markets, which amount to an ongoing threat to global health.

From the first reported case, on December 1, 2019, until January 5, 2020, the Chinese government engaged in a cover-up. As National Review’s Jim Geraghty recounted, in early January, China’s National Health Commission forbade reporting on the new disease. On December 30, Dr. Li Wenliang sent a message to other physicians warning that a SARS-like illness was spreading. He was arrested (along with six others) and obliged to apologize for “spreading rumors.” (Dr. Li Wenliang died of COVID-19 on February 7.)

Throughout early January, as cases mounted, the Chinese government issued soothing statements suggesting that the new pneumonia was not transmitted from person to person. As late as January 15, after Thailand and Japan had reported their first cases, official government sources were denying that human-to-human transmission had been proven, saying the risk was “low.”

Only on January 23, six weeks after the first case, did China announce a quarantine of Wuhan. By that time, millions had come and gone from the city during the busy holiday season, and cases had been reported in Vietnam, Singapore, Hong Kong, and South Korea.

…add to this questions over the true infection and death toll in China, claims American soldiers started the spread of the virus, their buying up of global stocks of medicines while telling the world little and their use of Uyghurs to work in factories when workers had been sent home and very little of what China has to say can be trusted or believed.

But America has been just as deceptive…

President Trump engaged in a series of soothing statements himself. On January 22, after the first U.S. case was reported, he said “We have it totally under control.” On February 2, he boasted that “we pretty much shut it down coming in from China.” Twice in February, the president promised that “when we get into April, in the warmer weather — that has a very negative effect on that, and that type of a virus.” On February 26, when cases topped 60, Trump claimed that “we’re going very substantially down, not up.” In South Carolina, on February 28, Trump likened criticism of his handling of the pandemic to impeachment, saying “this is their new hoax.” On March 6, he continued this theme. Facing criticism for his false statement that “anyone who wants a test can get a test,” Trump tried to string together a “fake news”/Ukraine theme. He said the tests were “beautiful,” adding “The tests are all perfect, like the letter was perfect, the transcription was perfect, right?” Asked whether he was concerned about the virus’s spread on March 7, the president said “No, we’ve done a great job.”

…add to this questions over death counts, Trump knowing in January that China was lying about the true scale of the pandemic and sacking a Naval Captain for publicly warning of a pandemic on his Aircraft carrier, and America has been just as bankrupt when it comes to telling the truth.

We can’t trust ‘news’ on social media and we can’t trust the Governments themselves – one of the legacies of this universal experience we are globally experiencing will be that there wasn’t a universality of truth, that were were a thousand different lies masquerading as the truth all desperately promising explanation while erasing complicity.

The virus hasn’t just infected us and our economies, it has infected the truth.

We seem to have inoculated ourselves to the truth via social media bubbles that tell us what we want to hear and foolishly believe we have herd immunity to the murder of lies.

As NZs journalism collapses, the need for independent voices is more important than ever.