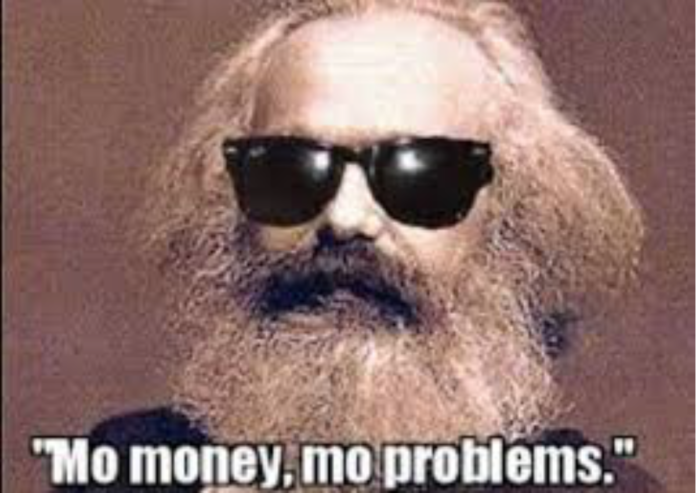 The answer to “the new normal” is a Workers’ Action Plan
People are using their lockdown time to speculate about what the ‘new normal’ will look life after the COVIT-19 crisis is over.  Nobody asked me but I’ll tell you anyway what the new normal will be and how it will not be different from the old normal, or ‘business as usual’, unless we stop it with a social revolution.
My last blog for TDB argued that this crisis would avoid the same old ‘new’ normal only if the exploited working class turned the tables and ended the destructive rule of capitalism, expropriating its wealth stolen from us in the first place, and building a society in which the working majority is the new ruling class.
The problem is that the working class internationally is locked down and repressed  by police and army when it protests its fate. So we need an Action Plan to get out of the lockdown one the virus has abated and solve the crisis through our own political action.
The ruling class has a head start. It has convinced most workers that this crisis as a natural event that puts us all in the same boat, pulling in the same direction and headed for the same destination. Many of them seem to think that boat is the one you tow to the bach to escape the lockdown while waiting for the new flu to create a herd immunity. Ask Boris Johnson if that sounds a good idea.
They couldn’t be more wrong. As I have argued in previous blogs, there is nothing natural about this crisis. Its cause when all boiled down is capitalism’s terminal crisis that is destroying the climate, ecology and society. This can only end badly as the destruction of nature, and humanity as part of nature. The COVIT-19 pandemic is but one symptom of this destruction.
The ‘new normal’ for capitalism will be no different to the ‘old normal’. The ruling class will continue to suck our blood as their entitled profits. They don’t care if their naked capitalism is exposed as parasitic on workers. They no longer bother to hide behind democratic facades and move to openly authoritarian regimes or dictatorships. The ‘new’ normal will be the same in essence because it must resort to fascism to destroy the threat of socialist revolution.
Unless we stop it with a Workers Action Plan for human survival.
Action Plan
– Mobilise unions, local and regional workers councils to coordinate a national Workers Health and Safety Plan to support health workers and represent the interests of all workers who are locked down and lose their jobs as the global economic crash bites. For workers defence committees to defend workers’ action and to smash the rise of fascist reaction!
– Workers take control of the public health system. Support the front line health workers, train more workers with living wage in better conditions supplied with PPE. No lockdowns that do not guarantee income, food, housing and health and safety in isolation. Occupy and seize the buildings and resources needed to house the isolated. Demand the nationalisation of private sector health resources without compensation and under workers’ control to take the overflow from the public sector.
– The pandemic threatens sick and older people most. They must not be sacrificed to the herd mentality by deliberate underfunding that denies them proper ICU treatment. Isolate the vulnerable in conditions that can deal with their existing health conditions as well as the COVIT-19 viral infection. Sufficient funding for adequate screening, testing and quarantining.
– Oppose the bail out of banks and corporates disrupted by the lockdowns with money paid for by workers, blood, sweat and tears. Government prints money for banks which is ultimately repaid from value created by the productive working class. Use that money to fully fund an adequate public health system and a living support for those who lose their jobs! Jobs for all. Public works to provide full employment.
–Nationalise bankrupt banks and large corporates without compensation and under workers control. Create one state bank that regulates the economy, taxes capital gains, and makes loans to businesses that are sustainable and carbon negative. Negotiate land use with landowners to produce what is needed, sustainably and carbon negatively.
-Unions and local and regional workers councils to coordinate a National Economic Plan that spells out the changes that are necessary to the economy for production that meet basic needs, that are sustainable and carbon negative to meet the requirements of restoring the ecology and reversing climate change.
-For a Workers Government to implement this Workers Action Plan.
The above demands are necessary to meet the immediate needs of the workers of Aotearoa/NZ, and to spell out what changes from the capitalist ‘normal’ are required to avoid the threat of human extinction.
No capitalist government will agree to legislate these changes as they clash with the interests of the minority ruling class. Trade unions and workers’ councils must form their own political party standing on such a program, representing the 80% who are workers, who will mobilise their economic power by withdrawing their labour, and making an indefinite political general strike to replace the capitalist dictatorship with a democratic Worker’s Government and economic plan.
Dave Brownz is TDBs guest Marxist Blogger because every Left Wing Blog needs a Marxist.