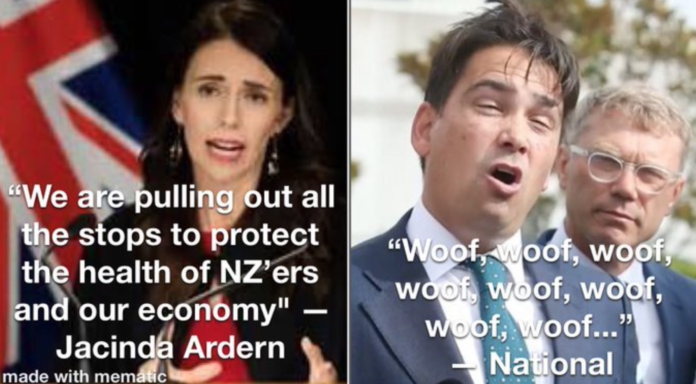 It’s April Fools Day 2020, but this time around it seems like we are all the fools and there’s no laughing.

A pandemic exacerbated by cheek to jowl overpopulation & habitat destruction thanks to climate change doesn’t seem like the great joke it used to be.

I don’t care what your politics are, but after leading with such grace through a terrorist attack, volcanic eruption & a pandemic WHILE being a new parent – it would be the most petty partisan with all the depth of a puddle to not agree Jacinda Ardern has earned a second term.

Which is why it would be so perverse if she lost the 2020 election, and I fear that is a very real possibility.

As a class leftist, there is much to be disappointed to date with this Government. The lack of real transformative progress on welfare reform, taxation reform, climate change reform, public services and infrastructure upgrades all frustrate the hell out of me, but when this country has been hurt, her leadership has calmed a frightened and hurt nation like no other could.

I believe Jacinda will continue to dazzle with her leadership during this crisis, and Labour will have the highest Party vote on election night, but she will totally and without blemish, overshadow NZ First and the Greens so much so, that their only survival back into Parliament would be by gifting each Party an Electorate seat.

Northland for NZ First, Central Auckland for the Greens.

Jacinda’s leadership is sucking the very oxygen out of Winston Peters and James Shaw. I won’t even include Marama Davidson in that sentence because for all intents and purposes she has become totally invisible to the electorate.

Simon Bridges only hope is that the virus leaks into NZ and he can trace it back to a perceived incompetence that he can claim was a lack of leadership. He’s got nothing else, and all National’s punitive social policy shit and bonfire of red tape regulation will just look petty in the face of what we are collectively facing and the peoples demand to be protected by the State will make his small Government mantra look ridiculous.

Simon is stuck with being the spoiler hoping that Jacinda’s dazzling star performance eclipses oxygen to NZ First and Greens so they both slip beneath 5%.

National may not get the highest Party vote on election night, but if NZF & Greens don’t make it, National + ACT could still become the Government.

In that scenario the Māori Party winning a Māori electorate and bringing in 1 MP off the Party list could be Labour’s only lifeline back into Government.

Losing because of MMP machinations after providing such incredible leadership through National tragedies would be a tragedy in of itself.