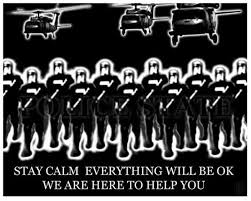 No not all cops are “bad”, but unfortunately too big a proportion of them are power trippers and let the uniform, car, taser, pepper spray, gun go to their heads. They let down all the good cops.

They forget they are there to serve and protect the public not intimidate and try and stand over them. One bad example I’ve personally come across is Constable BCY075 [wouldn’t give his name] based in Thames.

If there was a gestapo in NZ he would be in the front line doing the bidding of whatever dictator was in power. In my experience cops like him were usually one of those kids who never quite fitted in at school and were always on the outside, building up a resentment and hatred for those who were popular. Sometimes copped a hiding or two behind the bike sheds and run snitching to the teachers all the time. Most of us remember kids like that.😭

They join the Police to feel tough and get back at everyone in their life who they perceive mistreated them. Once they grow up a bit and mature they sometimes come right…or karma gets them.🤔 BCY075 needs a couple of refreshers at the Police College to understand that he has authority to use in the public interest not for his own agenda.