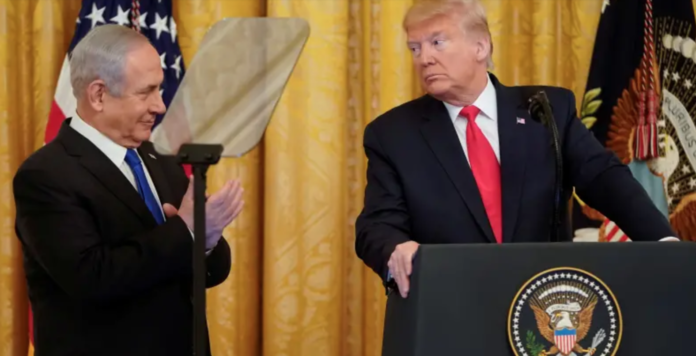 Trump and Netanyahu’s so-called ‘Peace to Prosperity’ plan ignores the Palestinian right to self-determination, 1967 borders, international humanitarian law and a stream of United Nations Security Council resolutions, including UNSCR 2334, which New Zealand helped to bring forward in 2016. The Resolution was passed in the UN by 14-0, with even the UK voting in favour and the isolated US obdurately abstaining.

The greatest political threat to global peace and stability today is the wanton undermining, by great power interests, of universally recognised rules-based international relations, particularly those established by international law and the deeply humanitarian Fourth Geneva Convention. Resolution 2334 reminds us that Israel’s belligerently-imposed, exclusively Jewish civilian settlements, established on Palestinian land, are violations of the Fourth Geneva Convention. Zionist ideology isolates Israel from reason, the world community and commonsense; a glaring example of which is the Israel lobby’s description of the Palestinian land upon which it enforces its undeniably foreign military Occupation as “disputed”. Israel’s argument in this regard was rejected by the International Court of Justice in 2004.

The Zionist plan’s one-sidedness is meant to mislead, with references to what it terms Palestinian ‘violence’ repeated, out of context, over and over again, yet with no recognition whatsoever of Israel’s overwhelming daily violence and population-control methods practised on Palestinians.

Because of mainstream news media complicity, their daily headlines and commentary only occasionally ever mention the relentless Israeli violence in Palestine, let alone the frequent air strikes! Daily news and statistics regarding the violence Palestinians are forced to live under are reported, however, in the emailed In Occupied Palestine daily newsletter, sourced and compiled for easy reading and correlation chiefly from the Palestinian Monitoring Group’s daily situation reports. The In Occupied Palestine daily newsletter continues to be received and made use of worldwide, to subscribers only, as it has been for the past two decades. Many recipients choose to forward them still further, providing a valuable counter to Zionist propaganda.

It wasn’t until 15 January that four missiles were fired across the Green Line from Gaza. That Palestinian missile attack was followed by three others, on three separate days, towards the end of the month. On 30 January, Gaza’s Resistance fighters also opened fire on an Israeli Army position in al-Farahin, behind the Green Line. The Palestinian missile-firings were clearly an outraged response to 37 persistent Israeli Gaza ceasefire violations up to and including 14 January.

On the day of the first Palestinian missile firings, Israel hit Gaza with four air strikes, two Navy attacks on Palestinian fishing boats and four Army assaults on Gaza farmland. In addition, the Gaza community in east Khuza’a, Khan Yunis, also came under attack from beyond the Green Line. By the end of the day Israel had committed 11 ceasefire violations, bringing its total for the month until then to 48.

By the last day of January, the total number of Israeli Gaza ceasefire violations totalled 139 compared with 7 (two of which targeted the Israeli military) from Palestinian Resistance factions. The population in Gaza, however, suffered five deaths at the hands of the Israeli military in January, the youngest of which was aged 15. While Israeli propaganda claims its border with Gaza is under constant threat, the Israeli Army makes incursions, at will, into Gaza. Israeli warplanes have total freedom of movement over a territory that has no means of aerial defence whatsoever.

Of course, it is not only Gaza that is terrorised by Israel. The daily toll of malevolent Israeli Army population control and Occupation settler violence inflicted, daily, brings nothing but total misery upon all Palestinians living under belligerent military Occupation. The relentless horror is documented regularly in the In Occupied Palestine (IOP) daily newsletters. Here are just a few of the accounts taken from those IOP newsletters covering the month of January:

Israeli Army mosque violation and population control: Jerusalem – 13:30 and again at 19:00, Israeli police officers invaded the Bab Al-Rahma prayer area in the Al-Aqsa Mosque and assaulted worshippers, forcibly pepper-spraying them and forcing them out of the mosque.

Israeli Army robbery and population control: Hebron – 12:00, Israeli forces seized a motor vehicle equipped with tools, emergency devices and medication belonging to the Palestinian Ministry of Health, and detained a doctor, Firas Abu Ali, as well as two other people who were providing medical services in the area.

Israeli Army armed robbery – population control: Bethlehem – the Israeli Army robbed a resident of Nahalin, Mahmoud Ahmad Suwad, of a concrete pump he was using to build a home.

Settlement development: Jerusalem – the Israeli Government approved plans for the construction of 1150 settlement units, the first stage of planning procedures which include a plan to build 786 housing units in Ramallah and 180 in the Mitzpeh Dani settlement, as well as 147 in the Mitzpeh Jericho settlement, 107 in the Alon Moreh settlement, 100 in the Neve Tesuf settlement and 40 in the Bedouin colony in Salfit.

Israeli Army land theft: Bethlehem – the Israeli Army ordered the seizure of land in the districts of  Baqoush, Khillet Thaher al-Ain, Thaghrat Hamad, a-Shaghaf, Zuqindih, Ain Qassis and Shush’halat, as well as the al-Rajim areas of al-Khadr and Irtas. The land was seized for the building of a settlement bypass road.

Israeli Army vandalism and sabotage of Palestinian eduction: Hebron – 09:10, Israeli forces destroyed the foundations of a school under construction in north-east Yatta.

Israeli Occupation population control and mosque violation: Jerusalem – the Israeli Occupation issued orders, banning two residents, Ahmad Ghazalat and Moath Idris, from entering the Al-Aqsa Mosque, for a period of five months, as a condition of their release from captivity.

Occupation settlers – racist arson attack on mosque: Jerusalem – dawn, Israeli settlers set fire to the Shuafat Mosque in Beit Safafa village and spray-painted race-hate messages on the mosque walls, while the Israeli Army sealed off the mosque and prevented worshippers from entering.

Home invasions and  armed robbery:  Nablus – 02:05-05:00, the Israeli Army raided Burqa village and searched several homes. In one of them, the householder, Mohammad Faleh Daghlas, was robbed of cash to the value of 5,000 NIS(US$1,200). In another home, one person was taken prisoner and, in another, Maen Nureldin Al-Sha’er  was ordered to report to Israeli Intelligence for interrogation.

Occupation settlers and Israeli Army violence – 3 villagers wounded: Nablus – 13:30, Israel Occupation settler militants raided farmland on the outskirts of the village of Madama, throwing stones and smashing the windows of the home of a villager: Ahmad Khalil al-Qat. The Israeli Army, firing rubber-coated steel bullets, stun grenades and tear gas canisters, arrived to support the settlers as the villagers began to try to defend themselves and their property, wounding three villagers.

Towards the end of the 1990s, while “surfing” the Internet, I discovered the Palestinian Monitoring Group‘s daily situation reports (sitreps) concerning the whole of Occupied Palestine. It seemed to be the only daily account of the Israeli Occupation’s daily toll on Palestinian life, limb, liberty and property, to counter the almost complete lack of such news from the mainstream news media. That was how I began compiling and emailing, on behalf of the Palestine Human Rights Campaign in Auckland, the In Occupied Palestine daily newsletter. News rapidly spread about the IOP’s availability and our list of subscribers has kept growing.

Whenever the PHRC had a properly functioning website (sadly now defunct), each newsletter was also posted and archived, which meant it was more easily accessible globally. The In Occupied Palestine daily newsletter continues to be circulated worldwide but just by email, to subscribers only, as it has been over the last two decades. Please contact lesliebravery@icloud.com if you also wish to become a subscriber.

No security for Palestine

Israel wishes the world to consider security as its own unique right, one not applicable to the militarily Occupied, segregated and defenceless Palestinian people. Sheldon Richman, writing in Counterpunch on 3 February, quotes from the Zionist plan:

Upon signing the Israeli-Palestinian Peace Agreement, the State of Israel will maintain overriding security responsibility for the State of Palestine, with the aspiration that the Palestinians will be responsible for as much of their internal security as possible, subject to the provisions of this Vision.

It gets worse – in the plan there is no mention whatsoever of security for Palestine against external threats and it goes on to state:

There is no vestige of humanity nor respect for Palestinians in Israel’s daily, criminal acts of oppression against them – the Zionist regime exhibits nothing but vile contempt towards those it wishes to control. Israel’s behaviour should be warning enough to the world that the ‘Peace to Prosperity’ plan is nothing but subterfuge to permanently gain the upper hand and wipe out all hope for the Palestinian people. Have we learned nothing from history? Stuart Littlewood reminds us of Israel’s Plan Dalet, describing the proposed plan, he writes: “The Zionist terror conspiracy to steal the land of Palestine is nearing its bizarre climax.”

The Palestinian people have most certainly not been consulted in the contriving of this contemptuous so-called ‘deal’ yet the UK seems to have come down on the side of the US and Israel in apparent approval of the Netanyahu/Trump plan. Will the present New Zealand Government unequivocally reject it and stand by Resolution 2334? The endangered worldwide perception of international law and defence of universal human rights and justice desperately needs progressive governments to declare their unconditional and unwavering support.