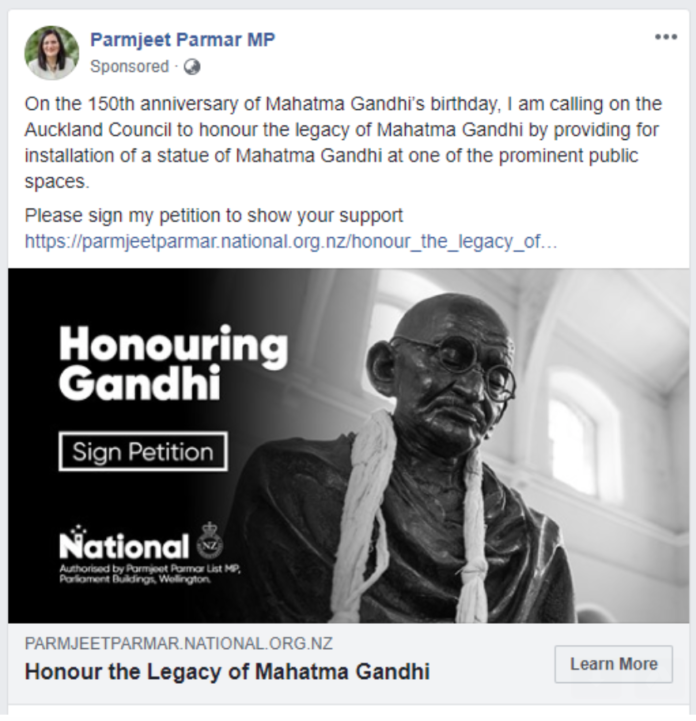 Backbench Opposition MPs are occasionally curious creatures, as are social media advert-targeting algorithms. Due, no doubt, to an ongoing quirk of the latter, I found myself presented with a sponsored post from National’s List MP based on Mt Roskill, Parmjeet Parmar, calling for the enshrinement of a Gandhi statue here in Auckland to coincide with the latter figure’s 150th birthday and asking me to sign a petition in support of same.

Now, the comments left in response to this post were pretty interesting in and of themselves. If you were expecting some sort of groundswell-outpouring-of-support from the local Indian community as National presumably were when they authorized the effort [and more on that in a moment], then you would perhaps be left hanging.

Many comments therefrom appeared to be in one (or both) of two camps – those who were suggesting that while such a statue might be appropriate for/in India, it didn’t necessarily follow that it’d be a good idea to have one *here* … and those who were pretty anti Gandhi for various reasons. There were also a few other sorts of response, including an array of potential alternatives if we really were in need of an additional effigy [I put in my two cents in favour of one of NetaJI, on grounds of … another story for another time], and at least one pointing out that there’s already a Gandhi statue located in Wellington by the central railway station. Virtually all of these comments (as in, all but a literal handful out of the more than one hundred responses in that thread) were from members of the Indian community.

Now that matters, not so much because of what it tells us about the perceptions and the psychology of said community’s membership – which is pretty interesting in and of itself – but rather because of just *why* the National Party apparently thought this idea would be a good issue to start campaigning on immediately on the cusp of an Election Year.

And that’s quite simple.

The Indian community has generally been one of the more diverse in New Zealand when it comes to electoral behavior. Many vote for Labour. Many also vote for National. Up until relatively recently, many also supported New Zealand First. Even ACT managed to find itself an Indian candidate in its top four at the last Election.

So the Indian portions of the electorate – and I should not perhaps monolithicize it by saying it is a ‘community’ singular – is a battleground, as multifaceted and militantly fought over as any bellweather physical seat. And, with more than two hundred and twenty thousand Indians living here (a figure which will, admittedly, likely include quite a few who are unable to vote in the next year’s upcoming General Election), a potentially rather lucrative source of political support in what’s likely to be an incredibly tight contest in 2020.

But while in previous years, the outcomes from the “Indian vote” here have been broadly consistent – Labour doing reasonably out of it, National slowly improving its vote-share, and New Zealand First also being in there as well – various events of the past year and a quarter have thrown much of that up in the air, disrupting those comfortable certainties.

That’s created both a ‘risk’ factor for National, in terms of the potential diminishing of its own vote coming from this general quarter; as well as an ‘opportunity’, derived from going after the votes that’ve been lost by the Coalition.

The former – the problem – resulted from the Jami-Lee Ross’s airing of a conversation with the current leader of the National Party in which the party’s stance toward Indian New Zealanders appeared to be that they were a) cash-cows and seat-warmers when National sought to consider them at all … and b) that they were worth perhaps only half a Chinese person even on *that* lowly score.

It doesn’t take Crosby-Textor to tell you how and why *that* will have burned some bridges.

The latter, and much more recent event – the opportunity – was crafted via Shane Jones’ attention-grab before last. It’s an open question as to whether Jones’ rhetorical enfilading of the Coalition’s Indian constituency will lose them more votes than NZF might shore up or gain from other quarters for such displays; but while it might be tempting to regard the whole thing as an “NZF Problem”, even despite Iain Lees-Galloway (the actual relevant Minister in the situation) expressing his opposition to Jones’ comments, the fact that Jones is a Coalition Minister, whose antics are – broadly speaking – tolerated by his Coalition Partner, suggests that the fallout from that episode is unlikely to be exclusively NZF’s to bear.

So, like I say – it’s a situation of ‘risk’ and ‘opportunity’ for National going into 2020’s tight contest as applies potentially tens upon tens of thousands of votes.

It’s therefore understandable that they’d be rather keen to attempt a re-run of the ‘Ethnic Strategy’ which was a fairly prominent portion of both their national- and local-level electoral outreach efforts from about 2014-2016. I won’t go into any great detail about it here, not least because it’s probably not that interesting to most … but suffice to say it featured National attempting to take votes off Labour by putting forward ‘ethnic’ candidates and occasionally downright peculiar stabs at “appealing” to their relevant communities/constituencies. And, perhaps not at all coincidentally, had its arguable not-all-that-high-water-mark just over three years ago *also* in Parmar’s electorate, during her ill-starred contest against Labour’s Michael Wood for Mt Roskill in the 2016 By-Election.

Here’s the writeup I produced at the time, which also runs through some of them aformentioned prior examples/manifestations/missteps.

Anyway, to bring all of this back to both the present and the immediate subject at hand … it seems pretty straightforward why various minds at National apparently thought it’d be a great idea to approve Parmjeet Parmar MP putting out a release calling for “Auckland Council to provide a statue to honour Mahatma Gandhi in one of Auckland’s public spaces […] such as Aotea Square or the Auckland Domain“.

And then thought they’d double down by bringing the whole thing back two months after it was first announced [which was in early October, to coincide with the anniversary of Gandhi’s birth] through a fresh influxion of advertising cash. (Which has, incidentally, given it a far higher response-rate and interactivity, if we compare the few dozen reacts etc. each of her postings about it on the 2nd and 6th of October got to the nearly three hundred on the 9th of December one that’s been ‘sponsored’)

Part of it’s the same reason just about any party or politically inclined organization does these sorts of ‘petitions’ in the first place. It’s a contact-info gathering exercise that’ll in theory enable the Nats to more easily connect with various portions of the electorate. By self-identifying as interested in one of their pushes, and giving them your name, email, and potentially mobile phone number (especially with the “Send me text message updates” box still auto-ticked), you’re saving them the trouble of having to ferret you out or chance across you on the hustings or door-knocking, and giving them many more months to attempt to forge/build upon a connection with you through periodic emailed/txtd bluster. It’s not “spam”, because you asked for it. It’s not “junk mail”, because it’s not in a post-box. It’s not nearly as advanced nor useful as some of the much more data-driven analytic and outreach tools being deployed in the US these days … but, then, we’ve always been [often thankfully] a few years or even decades behind them when it comes to campaigning.

And anyway, that candidate/party to individual person contact-harvesting effort is only a secondary purpose compared to what this Gandhi statue push is *actually* for. Which is a much more ‘general’ sense of connectivity.

As I said some paragraphs ago, the National Party likely feel they are in a situation of both ‘risk’ and ‘opportunity’ as applies the Indian swathe of the electorate. On the one hand, they are painfully aware that they have to fend against a perception that they basically see the Indian communities of this country as little more than cash-cows and window-dressing pseudo-“diversity” … pursuits in which said party would apparently really much rather be dealing with the Chinese, thanks, anyway. That’s the ‘risk’.

But on the *other* hand, they’re also cognizant of the fact that they’re up against a Coalition which much more recently had one of its allegedly senior Ministers go on what seemed to be a sustained foray against various Indian customs, culture, community organizations, and Voice and Viewpoint(s) generally.

So therefore, what National’s chosen to do is attempt to put forward something designed to show their targets that they’re … pretty much the opposite of all of that – both of their own prior ‘shortcomings’, and of their opponents’ more contemporary tin-eared conflagrationism. A ‘symbol’, if you will.

What of? That National values the community in question, its cultural touchstones, its heritage, and its voice [as illustrated by having one of its Indian MPs use *her* voice to put the proposal forward]; and is ‘in touch’, listening to and engaging with all of the above; prepared to offer literal pride of place … or, as the press release puts it, “prime public spaces“, to same.

Except here’s the problem with that. Gandhi’s actually, to put it mildly, a rather divisive figure in India and the broader diaspora. I won’t go into why here, but suffice to say there’s *quite a number of potential reasons* from just about all possible viewpoints upon the matter. He *is* resoundingly popular with a certain sort of Anglosphere liberal, however, because of his reputation *external* to India … and if the reaction on Parmar’s recent post was anything to go by when last I’d checked it,  there’s probably rather more support in *that* demographic for a Gandhi statue out there in Aotea Square than there is in much of the local Indian community.

So straightaway, it doesn’t look so much like “listening” to Indian New Zealanders, as an attempt to appeal to what National thinks they *should* like (both in terms of Gandhi, and in terms of a statue of Gandhi *here*), based on some rather lazy [lack of] thinking.

There’s also a bit of an irony in the actual form and capabilities of this ‘Symbol’, as well. For it is a rather curious maneuver, if you are facing an embedded perception that your attitude to the Indian community is that they are there to be seen and not heard except when being deployed for political/vote-garnering purposes …

… to then attempt to solve the problem by installing as a political stunt a statue nobody seems to have asked for in a highly public place – where it, by definition, can *only* be seen and not heard.

Statues, rather like some Opposition Backbench MPs, with the occasional exception of ‘Res Ipsa Loquitur’, are only rarely able to speak for themselves.