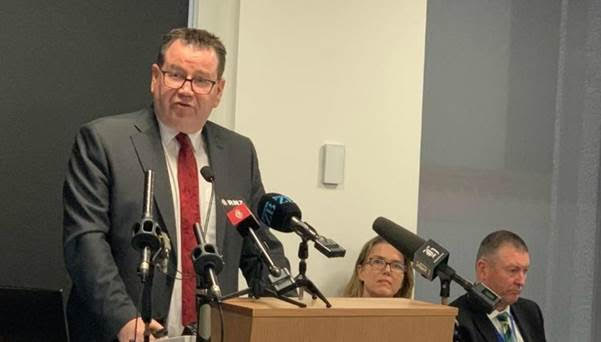 I’VE BEEN WATCHING The Crown on Netflix. The fifth episode in the latest series, “Coup” exposes the 1968 plot hatched by furious members of the British Establishment to overthrow the Labour Government of Harold Wilson. The plotters included not only the pugnacious media-mogul, Cecil King, but also the Queen’s second cousin (and recently laid-off head of the UK armed forces) Lord Louis Mountbatten. Obviously, the planned coup never eventuated. I mention it only because the drama provides a forceful reminder of how the Establishment responds to genuinely democratic-socialist Labour governments.

I think it’s safe to say that after Finance Minister Grant Robertson’s announcement of the Government’s proposed infrastructure spend-up, the New Zealand Establishment will be plotting nothing more dangerous that inviting the Minister to celebratory end-of-year drinks. Out of the $12 billion Robertson has set aside for infrastructure investment, $8 billion will be allocated to specific projects, with the balance of $4 billion held in reserve. That the Establishment feels able to relax is attributable to the fact that 85 percent of that $8 billion is to be spent on “transport projects” – by which, of course, Robertson and his colleagues mean “roads”.

Oh, sure, Robertson’s media release refers to roads and rail, but unless something profoundly “transformative” has occurred within the present Cabinet, the amount spent on New Zealand’s publicly owned railway network is unlikely to represent even a sixth of that $6.8 billion. Which means that this Government, supposedly committed to purposeful action against Climate Change, is proposing to spend billions and billions of dollars on making our roads safe for the road haulage industry’s heavy trucks and the middle-class’s gas-guzzling SUVs. The Establishment doesn’t organise coups against Labour ministers who do it favours like that – it nominates them for knighthoods!

Robertson’s announcement comes after months of just about every major banker and businessperson, every mainstream economic and political commentator, earnestly begging the Finance Minister to take advantage of the unprecedentedly low cost of borrowing to fiscally stimulate New Zealand’s sclerotic economy. I suppose we’re obliged to congratulate Robertson for his discipline. A less cautious politician would have taken the  policy initiative – along with the consequent kudos. But not Robertson. Determined that only good headlines would greet his final determinations, he waited until the pressure for some sort of major fiscal intervention became irresistible. Unsurprisingly, media criticism has been … muted.

But, if Robertson’s caution is bad, then the Greens’ response to his announcement is just plain sad. To be clear, their transport champion, Julie Anne Genter, has been humiliated. The road transport lobby has effortlessly outmanoeuvred whatever policy wonks she’s had pitching the case for rail. The tires on the wheels of the big rigs chewing up our roads are all humming “Hallelujah!”

But, are the Greens’ outraged? Are they cutting-up rough? Not soze you’d notice. How’s this for a media release?

Seriously? Yes, seriously. And, it gets worse:

“As part of the Government’s capital investment package announced today, the Government will support the public sector to reduce its carbon footprint through an infrastructure spend of $200 million.”

Oh, wow! Really, James! A whole $200 million! So the Public Service can buy a few more Prius cars? How can we ever express our gratitude? A Labour-led government, with $12 billion to spend, allocates a breath-taking $200 million to making the Zero Carbon Act mean something. Are we supposed to be grateful? What would Greta say?

And Metiria – what would she say? Twelve additional billions of dollars to spend and from what’s been released today it would appear that not one cent of it is to be spent on beneficiaries. Never mind the recommendations of the Welfare Expert Advisory Group. Never mind that the Job Seekers Allowance is simply too meagre to live on without falling deeper and deeper into debt. Never mind that pouring money into the pockets of our poorest citizens is the fastest and most effective way of delivering our economy a much-needed shot of adrenaline. No, never mind all that. Finance Minister Robertson and Social Welfare Minister Carmel Sepuloni have no intention of upsetting the Establishment by giving beneficiaries anything remotely resembling a Christmas present.

So much for our “transformational” government: our Prime Minister’s “politics of kindness”. The saddest part of this very sad story isn’t just its courage and compassion deficit; or even its complete failure to register the scale of the opportunity that’s been lost. No, the saddest aspect of this disgraceful announcement is that young people will receive it as the best the Left can do. It’s not, kids. Truly. Genuine Labour governments, genuine Labour Prime Ministers, have done way better than this. If you don’t believe me, then take a few minutes to watch this.

Before concluding, however, I’d like to leave you with this quote. Appropriately, given the way this post began, it’s about Harold Wilson. What he stood for and why, eventually, the Establishment was successful in driving him out of office. (The quote itself is from Smear! Wilson & the Secret State by Stephen Dorril & Robin Ramsay. Published in Great Britain in 1991 by Fourth Estate Limited.)

“Wilson embodied the radical end of the wartime social contract, which not only saw that a dynamic mixed economy demanded a producers’ alliance, but also saw that such an alliance could not succeed with an ascendant City of London. The extraordinary hatred that Wilson provoked on the British right was not irrational: Wilson was a serious threat; he knew who the ‘enemy within’ actually was. And they knew he knew; ‘they’ – the banker in the City with the elder brother in MI6 and a cousin in the Army – ‘they’ knew that Wilson, virtually alone among Labour leaders of his generation, had pulled aside the wisps of mystification which hid the British Establishment and seen the power of finance capital at its heart.”

If Grant Robertson and his colleagues ever followed the financial sector’s twisting labyrinth to the Capitalist Minotaur’s hidden lair, it wouldn’t be to slay him, but only to slap him on the back, shake him by his bloody hand, and invite him to the Treasury’s next cocktail party.