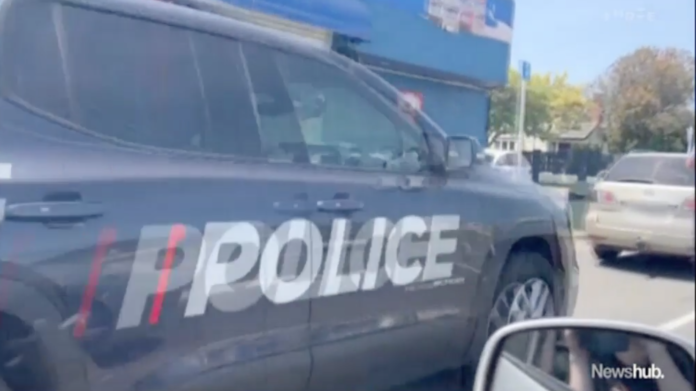 A day after the Labour Government jaw droopingly suggested enormous Police State powers against anyone ever being around guns, video footage appears proving the very concerns many of us made about roving armed police squads…

A video of armed police pulling over a man in Hamilton has sparked concern about the necessity for the new response teams.

A member of the public filmed the Armed Response Team pulling over a man they thought was armed and it’s raising questions about what their intentions are while out on patrol.

The teams, which were introduced a month ago, are deployed to high-risk areas across the country. They’re equipped with Glock pistols and bushfire rifles while patrolling the streets in specialty vehicles.

They’re only supposed to be used for the most dangerous jobs, but footage of the armed team shows them relaxed while pulling over a silver car in suburban Hamilton.

“The offender was flagged for carrying or possessing firearms, so they stopped that vehicle,” said deputy commissioner John Tim.

However, the man was found unarmed and arrested by the officers.

…now we all agreed having specially trained Police was preferable to ill trained cops, but the criticism I made was that before the ink was even dry on this scheme, the Police were already building in mission creep.

Look, we all acknowledge that well trained police with guns should attend any situation where someone has presented a firearm, but look how quickly the Police have added a slew of other things where armed Police can just rock up and involve themselves.

Pulling someone over with armed cops because they are ‘suspected’ of a firearm is bullshit and we all know it.

It is a recipe for trigger happy cops to go all American on our domestic population and we all know that will mean more young Māori and Pacifica men get shot.

We want positive and smart Policing, and specially trained armed Police who can respond quickly to someone who has presented with a gun, but what we are quickly seeing here is justification for the cost of these squads by extending what the Police are defining as a legitimate threat. Pulling over someone at the side of the road because they might have a gun isn’t a bloody threat to anyone other than the person the cops are pulling over.