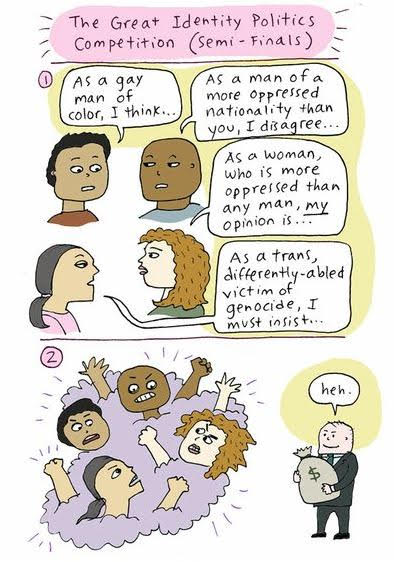 THE RELIEF of the ruling class can only be imagined. Thirty years after the collapse of actually existing socialism in Eastern Europe, they have more or less faded into invisibility. The ruling class (also known as the bourgeoisie) along with the proletariat, are now little-used politico-historical terms: as distant from today’s activists as the “patricians” and “plebeians” of Ancient Rome.

If you’re lucky, the villains of the twenty-first century Left are the “One Percent”. Otherwise, the people’s enemies are identified by characteristics over which they have no control: ethnicity, gender, sexual orientation and age. The fact that, 80 years ago, belonging to the wrong ethnicity and/or sexual orientation was enough to get you exterminated by the Nazis is but one of the many ironies associated with contemporary leftists.

Even the “One Percent” designation, introduced into popular discourse by the short-lived “Occupy Movement”, is a curiously disembodied term. To be a member of the One Percent is an entirely passive condition. You are a statistic. A percentage of the population made relevant solely by another percentage – i.e. the quantum of societal wealth your statistical sliver possesses.

Once again, a person’s villainy has nothing to do with what they do and everything to do with what they are. The other disturbing aspect of Occupy’s vilification of the One Percent was the way in which the remaining 99 percent of the population were let entirely off the hook. As if 1 percent of any group has ever been able to control the other 99 percent without a lot of help!

The contrast with Karl Marx’s world of class agency could hardly be more stark. To read his (and Friedrich Engels’) The Communist Manifesto is to enter a world in which classes act. To be a member of the bourgeoisie is to be in constant motion. This is because, once secured, economic, political and social power must be constantly reinforced and protected. Proletarians, likewise, are constantly struggling to weaken the grip of their capitalist masters. In Marx’s defining sentence: “The history of all hitherto existing society is the history of class struggles.”

Sadly, the effectiveness with which working-class New Zealanders – New Zealand proletarians – have struggled against the more-or-less continuous onslaught of the New Zealand ruling class and its bourgeois helpers has been sub-optimal. They allowed themselves to be betrayed by the country’s trade union bureaucracy in 1991, and remained pathetically loyal to a Labour Party which had, between 1984 and 1990, dismantled the social-democratic economy their parents and grandparents had struggled so hard to establish in the 1930s and 40s. The most highly-skilled and enterprising members of the New Zealand working class decamped in their thousands for Australia. Those who remained were forced into competition with the swelling numbers of immigrant workers who were admitted to make good the shortfall.

Unsurprisingly, this process produced innumerable socio-economic victims and with them enormous socio-economic resentment and rage. To an extent not before seen in New Zealand, it became necessary to obscure the suffering of these working-class citizens and, at all costs, prevent it from assuming a political dimension.

This has always been a major aspect of the bourgeoisie’s function in capitalist society, but in the aftermath of the neoliberal revolution of the 1980s and 90s it came to absorb an ever-greater amount of middle-class energy. A great deal of that energy was devoted to making sure that the class oppression in which more and more of them were now engaged remained hidden – not only from their victims, but also from themselves. In essence, this involved masking conscious human agency behind the immutable markers of human identity. The rise of what we have come to call “Identity Politics” represents the ideological manifestation of the ruling class’s objective need to destroy class politics, and of the middle-class’s subjective need to justify their participation in the process.

Redirecting the rage and resentment of those on the receiving end of neoliberal economic policy away from those actually responsible – the capitalist ruling class and its middle-class enablers – was always going to involve a pretty substantive re-interpretation of social reality. It meant recasting the malignant behaviours associated with poverty and powerlessness as the inherent failings of particular human sub-groups: whites, males, straights and, most recently and ridiculously, Baby Boomers.

Is it really the contention of the 55-year-olds-and-under who now blame the Boomers for all their present woes, that every human-being born on the planet in the years 1946-1965 has benefited unfairly from the economic, social and political trends of subsequent decades? Even the billions of people born in the Third World? The millions more born in the Soviet Bloc? Are they really insisting that there was not a huge discrepancy between the experiences of working-class Baby Boomers living in the capitalist west and their middle-class compatriots growing up alongside them? If so, then the degree of Gen-X and Millennial self-deception; their inability to recognise what has actually been happening around them since 1984 – or the role they and their own middle-class families have played in it – is astonishing.

What a victory for the ruling class! To create at least two generations incapable of understanding that the wealth and comfort of their middle-class parents was the necessary price of their complicity in destroying the self-defence mechanisms of the New Zealand working-class. Or that their own difficulties in replicating their parents’ lifestyle is purely and simply because their parents’ success was so comprehensive that the going rate for oppressing the lower orders of society has fallen sharply. How pleasing it must be for those at the top to see how much more willing the young are to turn on their parents and grandparents than on the true villains – the ruling class.

If the members of Generation X and the Millennial Generation really want to improve their lifestyles, then they should force up the price of complicity in class oppression by threatening to embrace or, even better, adopt for a generation or two, the precepts of Marx’s class struggle.