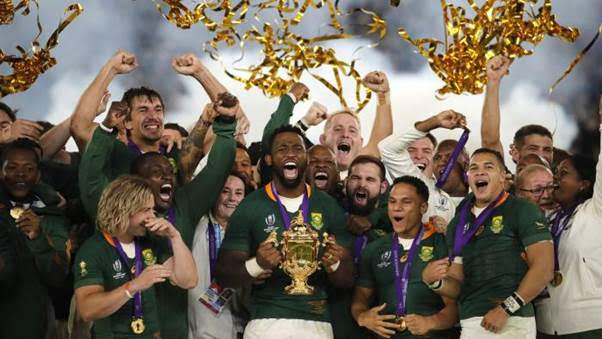 It’s a compelling image – 25 years after the first democratic election in South Africa a black South African captain of the Springboks holds aloft the World Rugby Cup trophy on behalf of his country.

The optics are marvellous. The picture tells us a transformation has unfolded so that black South Africans now enjoy full citizenship and are finally on an equal basis with white South Africans.

Unfortunately, the reality behind the picture is one of betrayal, corruption and abandonment.

The ANC has been in government for all the 25 years since apartheid was abandoned and it has made no material difference to the lives of the vast majority of black South Africans. Blacks now have civil and political rights but in terms of housing, health, education and employment the statistics are appalling. The majority are going backwards with the country dominated by a sense of hopelessness.

And to underline most starkly the legacy of this corrupt ANC government – South Africa is now officially the most unequal country in the world.

As inequality has risen so have the social problems associated with great wealth and grinding poverty alongside each other. In violent crime, rape and murder South Africa is also a world leader.

As far as I’m aware all the black South Africans in the Springbok team got there through scholarships to attend private schools where only a miniscule minority of black students have the opportunity to access resources for quality education, including sporting opportunities.

For the vast majority of black children and teenagers there is so little investment in their education or life opportunities that when they leave school vast numbers enter a world without work where unemployment is a way of life.

South African government politicians blame “the legacy of apartheid” for the parlous state of the country. Give us a break. In 25 years the ANC has destroyed the dreams and smashed the hopes for the vast majority of South Africa’s citizens. Instead of transforming the economy they adopted neo-liberal economic policies where the rich have been enriched at the expense of the poor. Hence the race to the bottom and the status as the most unequal country in the world.

The patriotism on display with the world cup win is really just a good-looking bandaid on a cancer. It is as flimsy as the ANC government’s commitment to justice and equity for all South African citizens.