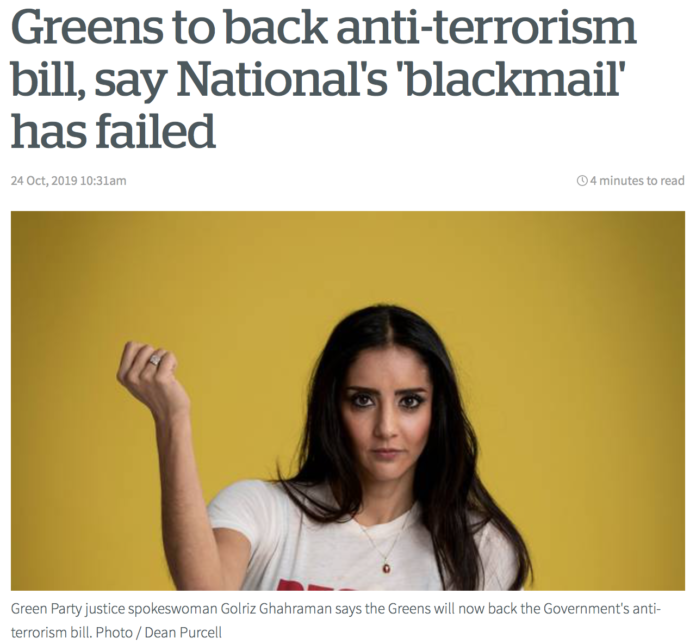 The Green Party has given initial support for the Terrorism Suppression Bill after negotiating changes, such as making sure foreign convictions and deportations are not accepted without proper scrutiny.

It’s the latest in a string of topics that have illustrated the growing divide among the old guard and the new wave of Greens.

This includes former co-leader Russel Norman, who is also Greenpeace executive director, who yesterdayberated the party for not putting agriculture into the ETS and a lack of climate action.

And now former MPs are at odds over the Terrorism Suppression Bill.

Former Green MP Catherine Delahunty said even with the changes it was still disappointing.

“Overall these kind of bills, which the Greens have had a tradition of opposing, are not going to make the world safer, they’re not the direction we need to go in,” she said.

Ms Delahunty said there were other ways to make the country safer from terrorism.

“It would be much more sensible to get out of the Five Eyes network, to make ourselves less of a target for people like ISIS, and actually stop being part some of the terror that countries like the United States actually visit around the world,” she said.

“We need to educate our population so they understand why the big risk, which is white supremacy, is unacceptable and how to address that.”

She said she knew the Greens would have been under pressure from Labour, but trying to suppress terrorism didn’t work.

Former Green MP Sue Bradford was also against the party showing its support for the bill.

The real difference between the Neo Greens and the Old Greens is that the Neo Greens are held hostage by Identity Politics. When you clear away Golriz’s identity politics grandstanding, the Neo Greens still haven’t actually identified the problems with the anti-terrorism bill…

it’s not until you have a deep dive into the fine print that you start seeing a law that has a terribly large amount of worrying holes in it.

We need wrap around services and support for people who have integrated themselves into terrorist groups and return to NZ, and it would be irresponsible to not have these individuals under surveillance, but the total lack of checks and balances to these powers and the very faint due process is genuinely alarming.

The Old Greens used to know these issues and championed them, the Neo Greens seek an Identity Politics angle and ignore the actual power dynamics of the legislation.

I’ve voted Green all my voting life and called for the Left to rally around them last election to prevent them from being flushed out under the 5% threshold, but when I consider the capitulations they’ve agreed to, the total lack of strategic thinking behind the scenes and the cult like manner Identity Politics has completely enveloped the Party, I think they might just be too alienating this time around.

Marama Davidson infamously called on white bros to delete themselves on Twitter, I’ve got a funny feeling the Greens might want those white bros to vote for them come 2020.