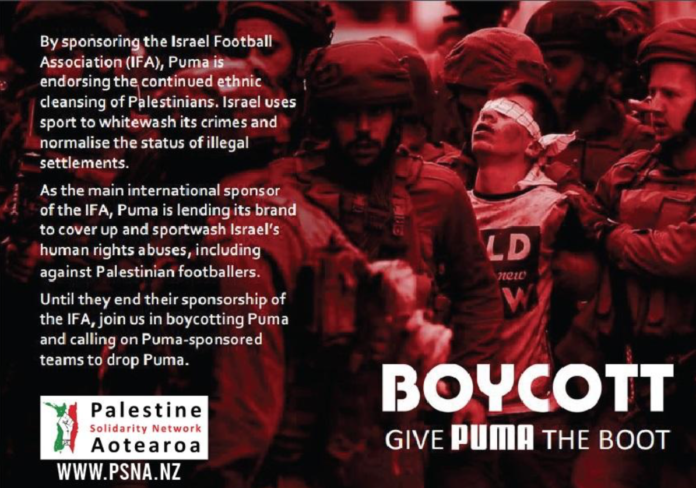 This Saturday, 26 October, marks the second International Day of Action against PUMA because of its sponsorship of the Israel Football Association (IFA).

Across New Zealand, and around the world, there will be protests encouraging the public to boycott PUMA goods and this will include calls for the Silver Ferns to join the boycott of PUMA by ending the sponsorship agreement you have with them. (In case you haven’t noticed – the Silver Ferns wear the PUMA logo on court)

The boycott is not because it’s the Israel Football Association but because the IFA includes football clubs based in illegal Israeli settlements on occupied Palestinian land and despite many appeals from human rights organisations, in Israel and around the world, it has refused to dissociate itself from these illegal settlements.

Meanwhile PUMA continues to sponsor the IFA (its only international sponsor) which helps legitimise the association’s policy of support for illegal Jewish-only settlements and the appalling Israeli policies towards Palestinians which goes with them.

It’s important to understand that the issue of settlements goes to the heart of the Israeli government’s racist, apartheid policies towards the indigenous people of Palestine. The establishment and expansion of these settlements, illegal under international law, involves driving Palestinian families from their homes and off their land. This is an ongoing part of the Nakba (“catastrophe”) under which Palestinians have suffered ethnic cleansing every day since 1948.

In addition, the settlements are an integral part of Israel’s military occupation which robs Palestinians of natural resources and denies them their right of movement.

In contrast to the behaviour of the IFA in recognising sports teams from illegal settlements, Palestinian sportspeople are often forced to abandon practices, games and tournaments due to Israeli Defence Force harassment at checkpoints and Israeli government policies to make them refugees in their own land.

When young Palestinians protest to demand an end to the theft of their land many have been murdered by Israeli snipers and many more lose their legs, also from sniper fire, and the chance to play sport. Many young Palestinians have had their sports careers ended in this way over many years.

The international campaign against PUMA is asking people to boycott the company till it stops supporting the IFA.

For this reason the Palestine Solidarity Network Aotearoa is asking Netball New Zealand to end their sponsorship deal with PUMA until PUMA ends its support for the IFA.

This campaign is asking that they show the same character and values off the court – standing with Palestinian sportspeople who face apartheid in sports as awful as that faced by black South Africans suffering under apartheid.