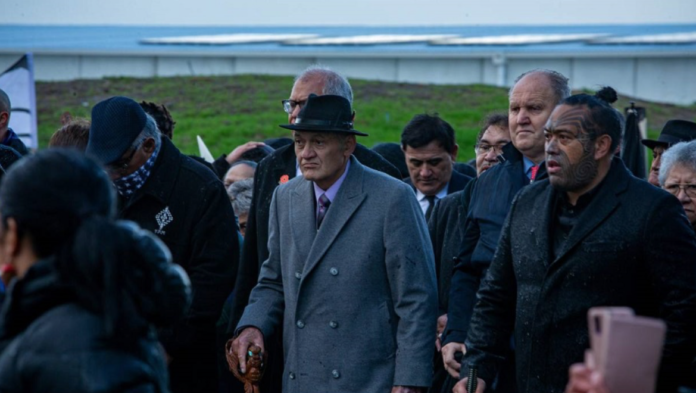 With some historical and present context, it should become readily apparent to Pakeha that the occupation at Ihumātao is not a free-for-all conflict for any and everyone to become involved in.

The year in which the Treaty of Waitingi was signed. Article Two of the Treaty was especially important for Maori;

Māori version: confirmed and guaranteed the chiefs ‘te tino rangatiratanga’ – the exercise of chieftainship – over their lands, villages and ‘taonga katoa’ – all treasured things. Māori agreed to give the Crown a right to deal with them over land transactions.

English version: confirmed and guaranteed to the chiefs ‘exclusive and undisturbed possession of their lands and estates, forests, fisheries, and other properties’. The Crown sought an exclusive right to deal with Māori over land transactions.

Twenty three years after the last signature to the Treaty document had dried, land at  Ihumātao was seized ‘by proclamation’ under the New Zealand Settlements Act. Four hundred hectares of land at Ihumātao was taken by the Colonial Government and transferred to settler families in the area;

“There was an accusation that was levelled against Waikato that there was an imminent plot to attack the settlers of Auckland. It was a fabrication, part of [Governor George] Grey’s dodgy dossier,” says O’Malley. “The accusation was window-dressing for the British Colonial Office, to give the appearance that Grey had no choice but to take troops into the Waikato.”

More than 400 hectares of land at Ihumātao was confiscated by the Crown, as punishment for the community’s allegiance to the King movement, and given to a handful of settler families.

Article two of the Treaty had been well and truly breached. “Exclusive possession of the land” had been “disturbed” as thoroughly as it could be.

A Deed of Settlement was signed at Makaurau Marae in Māngere, between the Crown and Te Kawerau ā Maki Iwi Authority.

A group of tangata whenua calling themselves SOUL (Save Our Unique Landscape) establish a presence at Ihumātao Quarry Road.

The presence  of SOUL and supporters at Ihumātao had swelled to several thousand people, from all over the country. The congenial attitude of Police, interacting peacefully with protectors/protestors, could be seen as the ‘New Zealand Way’ of doing things. (Subsequently, that good-will took a severe battering when some twit within the Police hierarchy thought it would be a ‘clever idea’ to publicly carry a firearm in the vicinity of the occupation.)

Politically, there have been many voices demanding many forms of ‘action’ or ‘intervention’.

From ACT’s shallow knowledge of history and feeding red-meat to it’s reactionary base;

Mr Seymour’s references to the occupiers “break[ing] the law and illegally occupy[ing] other people’s private property“; “legitimis[ing] unlawful behaviour by capitulating to an illegal occupation“, and “capitulat[ing] to a ragtag bunch of socialists and prison abolitionists” can only be described as a toxic, noisome, brew of crass ignorance and racism.

There is black irony and unashamed hypocrisy is describing the occupation as “break[ing] the law and illegally occupy[ing] other people’s private property” and “legitimis[ing] unlawful behaviour by capitulating to an illegal occupation” when the land was originally unlawfully seized, illegally occupied, and on-sold to colonial settlers in the first place.

His description of the occupiers as “a ragtag bunch of socialists and prison abolitionists” – without once mentioning that they were tangata whenua, was wilfully insulting, with more racism piled on.  David Seymour is without self-awareness or shame with his appalling comments.

But when asked by Radio NZ’s Corin Dann if she should have attended Ihumātao, his equivocation was cringeworthy and embarrassing;

“No. Because I don’t believe a leader necessarily needs to insert themselves in this. I think that’s – [interuption]

[…] She shouldn’t have got involved.

[…] She got involved. She set a bad precedent.

[…] I would not be intervening in this particular instance, the way the Prime Minister is.”

On Twitter, Russell Brown from the Public Address blog, put it perfectly when he summed up Simon Bridge’s insanely contradictory statements;

Hone Harawira said it most clearly;

“It would be nice to see the Māori ministers leading here rather than being told what to do by Jacinda. I don’t think she knows what’s going on here. Stay overseas. Leave it to Peeni and the whānau here. Let’s get it done.”

This is especially vital considering that the dispute over Ihumātao appears to be a schism with local Māori. As RNZ’s Te Manu Korihi Editor, Shannon Haunui-Thompson, explained;

This isn’t a Māori versus Fletcher issue – on both sides are members of the same iwi, hapū and whānau.

When the eviction notices were served yesterday, well-respected kaumātua of Te Kawerau a Maki and Te Akitai accompanied police and asked for the occupation to end and for them to leave Ihumātao peacefully. They even performed a karakia.

Ms Haunui-Thompson also rejected that the dispute was “generational”;

“…to say it’s a rangitahi [younger generation] issue is incorrect. There’s definitely a divide though amongst the iwi, amongst the hapu and whanau.”

To make it clear, it was not for the Prime Minister to intervene. Calls for her to visit Ihumātao were misguided. Her presence, at best, would be symbolic. At worst, misconstrued as more pakeha paternalism.

What was appropriate was for Māori MPs to visit; to listen; to facilitate where possible; to carry back to the Government what they had seen and heard. Māori working with Māori.

Simon Bridges then played the “law and order” and “private land rights”, cards. On 30 July, interviewed on  TVNZ’s “Q+A”, Jack Tame asked the current National Party Leader if he “would support police removing the people who are occupying the land at the moment“. Mr Bridges dodged the question;

“Well, it’s pretty simple when it comes to protests. You have an absolute right in this country to legitimate, fair, vociferous protest; you don’t have a right to break the law and get in the way of other people’s lawful activity.”

It was a simple question. It had only two possible answers;

There is no third option.

Any mature person watching that exchange and listening to Mr Bridges’ response could reasonably infer that (a) Simon Bridges had no idea whatsoever of the issues surrounding Ihumātao or (b) understood the issues perfectly well, but did not have the guts to offer a definitive answer.

Neither option is an edifying position for The Man Who Would Be Prime Minister. If he doesn’t “know the ins and out” perhaps he should do what all new MPs do in Parliament: breathe through his nose.

So there we have it: Simon Bridges is of the opinion that Jacinda Ardern has the Stalinist power to command  “protestors to go home“.  Who would have thought she wielded such Imperial Roman authority over her subjects. Mr Bridges had best tread cautiously; the Prime Minister could send him packing as well.

The reality is that Mr Bridges can comfortably pontificate  what should or should not be done. Or both. His comments can (and have been) as contradictory as he fancies. He can cause harm; sow discord; rattle nerves. From the relative safety and responsibility-free-zone of  the Opposition, he can say whatever he likes, regardless of consequences.

What is telling is that none of his utterances have been in any way constructive. His chest-thumping machismo no substitute for calmer, cooler heads. We are fortunate that he is nowhere near the “levers of power”.

Contrast Simon Bridges’ incoherence and impotence with that of the solemn mana of the Māori King, Kiingi Tūheitia Potatau Te Wherowhero VII, who on 3 August was welcomed onto Ihumātao with a formal pōwhiri;

“We have to hear all the mana whenua and find a way forward that works for all of them.”

The meeting would not include Fletchers, or the Government, Schaafhausen said.

And that is the point that has eluded most people: this issue is for mana whenua to discuss and to arrive at a solution. It is not for the pakeha Coalition government to intervene. It is not for the police to force protestors out. And it is most certainly not for self-serving politicians from the Right to exploit this issue for a perverted “law and order” beat-up to win a few votes from ill-informed redneck voters.

This is for Māori to resolve.

As the Māori version of Article Two of te Tiriti states;

At a time when Māori are determined to take firmer control of their own affairs – such as up-lifting and placement of Māori children by Oranga Tamariki – resolving disputes such as Ihumātao can only achieved by those directly involved.

The Crown – represented by the government – can assist. It can mediate. And in the end it can listen.

On 18 September, mana whenua announced that they had negotiated and reached a decision;

Māori had arrived at a resolution. By Māori, for Māori.

Kiingi Tūheitia explained the position that had been arrived at:

“Mana whenua agree they want their land returned, so they can make decisions about its future.”

“Kiingitanga has conveyed the views of mana whenua to the government and urged it to negotiate with Fletchers for the return of Ihumātao to its rightful owners.”

Now is the rightful moment for the Crown, through the Coalition Government, to sit at the table and play it’s rightful part as one of the two Treaty partners.

NZ Herald: Battle for Ihumātao – How farmland became a flashpoint

Radio NZ: Explainer – Why Ihumātao is being occupied by ‘protectors’

TVNZ: ‘By Māori, for Māori’ – Oranga Tamariki hui reveals Māori want to look after their own

The Spinoff: Mana whenua have agreed to keeping the land at Ihumātao. So what comes next?