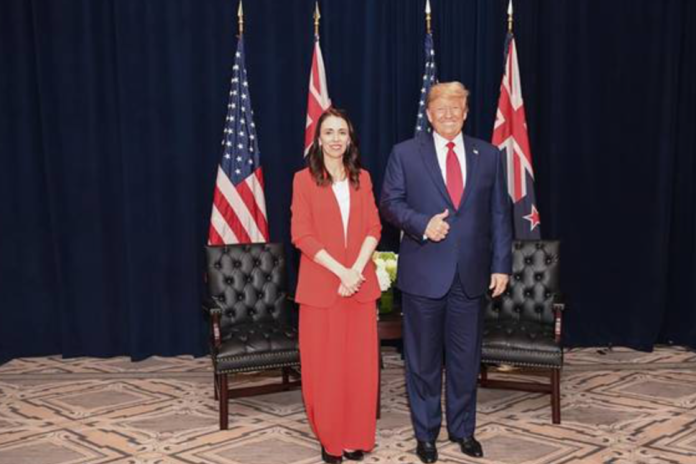 I gotta say – it’s rather odd seeing Simon Bridges attempt to attack Jacinda Ardern for not attempting to press Donald J. Trump on climate change, at their meeting earlier this week.

A few weeks back, New Zealand National Party people were attacking Ardern for allegedly – I stress the *allegedly* – refusing to be open to meeting with Trump. Because, amongst other things, TRADE RELATIONS. So, you know, “she’s SELLING OUT our PRIMARY PRODUCERS by refusing to meet – because she wants to politically posture”, or something.

Now, this was obviously not factual; and this week’s meeting shows that those assertions were basically baseless.

So instead, now that an engagement on trade *has* happened – and one that appears to have been pretty successful [oddly enough, Trump’s … “personal” approach to international relations may actually serve NZ better in this narrow regard than his predecessors’ more systemic or otherwise agenda’d facings] – we instead have the leader of the National Party claiming that the Prime Minister should have pushed Trump on climate change.

You know, an issue that Trump is well known to be pretty uninterested and/or actively hostile about.

A situation that becomes even more curious when we consider that the National Party here in New Zealand has more usually *itself* been pretty lukewarm on climate change related matters, with a preference for trade and agriculture instead.

So what’s going on here?

If the positions were reversed, and Simon Bridges was somehow Prime Minister … do we *really* believe that he’d have gone into a meeting with Trump, to push climate change action?

Of course he wouldn’t. He’d be gently mentioning trade, and then internally pondering which of the Peoples’ Republic of China or the United States he should attempt to sell out the national interest to, first, or endeavour to set up some form of bidding war over between the two.

There are – to my mind at least – legitimate areas to criticize this Government over. Ways to set out a principled and alternative vision, even, that provides voters and the country with a genuine sense of choice going forward. But it often seems that the National Party are less interested in doing that, than they are in simply throwing anything and everything at the proverbial Wall [no, not that one .. not the MP, either] in the vague hopes that *something*, *anything* sticks, no matter if it’s *exactly* the sort of stuff they’d vitriolically oppose, were Labour/NZF/(Greens) *actually doing* the thing National now claims it would want done.

The National Party has effectively said to the electorate “These are my principles! If you don’t like them … I’ve got others”

They have no “vision” – except of themselves in power.

And they shall say and/or do [mostly just “say”] anything and everything under the sun, in order to attempt to get there.