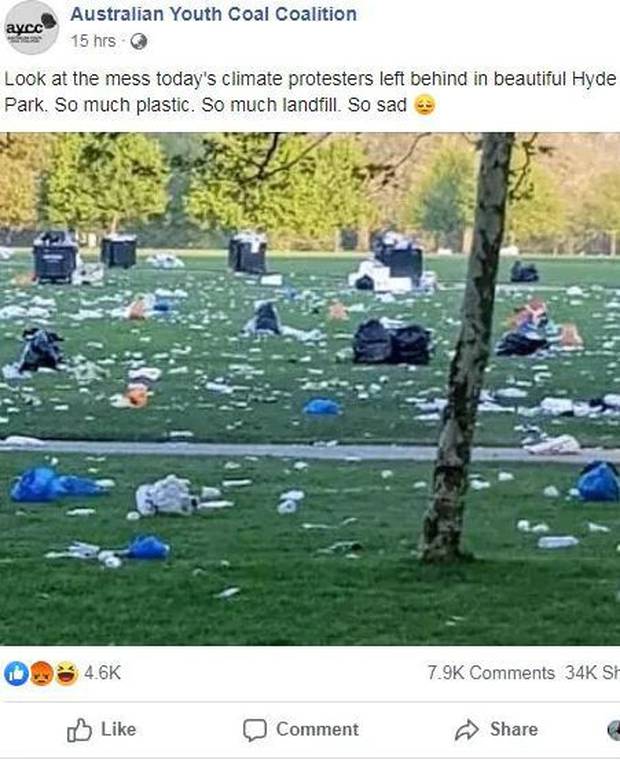 Tens of thousands of Australians marched against climate change – now one image has gone viral, for all the wrong reasons.

The Australian Youth Coal Coalition (AYCC), which has more than 3000 Facebook followers, took aim at the hundreds of thousands of protesters by posting a photo of rubbish they claim was left behind at a Sydney park.

“Look at the mess today’s climate protesters left behind in beautiful Hyde Park. So much plastic. So much landfill. So sad,” the group shared on its Facebook page.

The post has been shared more than 34,000 times with nearly 10,000 comments mainly condemning the students for making the mess.

So the ‘Australian Youth Coal Coalition’ – an astroturf organisation if I ever heard one – is attempting to play the usual game of hypocrisy that many right wing climate deniers use to attack any attempt to protest the climate emergency by claiming mess was left behind after the climate strike.

But the image was something completely different, and the real kick in the teeth is that these sanctimonious pricks sent a second image trying to claim they had cleaned up the mess..

“After the mess left behind by the climate protesters, a group of young coal supporters volunteered to do a big clean up,” the caption on the image read.

…what a pack of liars!
These tactics of outright lies are all climate deniers are left with now the science is as settled as it is.

‪I would imagine a Venn diagram of the Australian Youth Coal Coalition and the Hitler Youth would be a perfect circle .‬