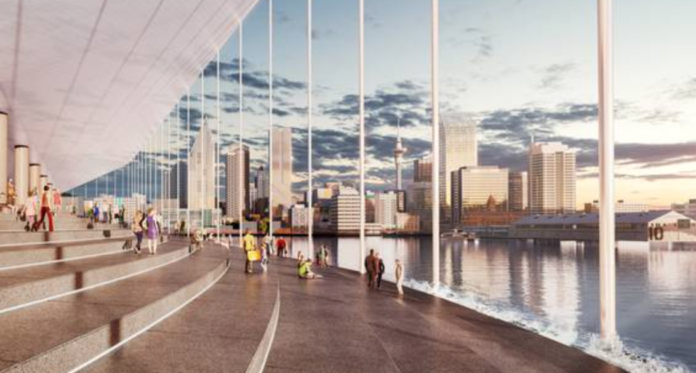 Public urged to get behind The Crater, a sunken waterfront stadium

The public is being urged to show politicians that they want a national, covered, multi-purpose stadium on Auckland’s waterfront.

The consortium behind The Crater Arena Aotearoa project has taken out advertisements aimed at prompting people to support The Crater on a poll at change.org.

Their design – a see-through enclosed structure that could scale for crowds from 20,000 to 70,000 – is a finalist in the future projects category of the World Architecture Festival Awards.

But the stadium, which would be sunk into the Waitematā Harbour next to Bledisloe Wharf, needs positive support from politicians to give private funders the confidence to fork out for a detailed feasibility study.

…there seems to be an enormous disconnect between what people want to build and the environment they will be building in.

With catastrophic climate change on the horizon, and rising sea levels, the idea of building  a sunken stadium right on the waterfront sounds like a cleverly designed death trap.

Shouldn’t modern large public buildings be future proof? You couldn’t create a parody funnier than this, a sunken stadium on the waterfront hit by a huge storm surge would surely destroy this?

The thing about NZ, is that we are actually stupid enough to do something like this, then have the company fall over while it’s being built so the council and Government have to step in to complete it and a year after completion, it gets swamped by a storm.

I’d say this was a joke, but a joke requires skill, timing and good structure, none of which seems to apply here.