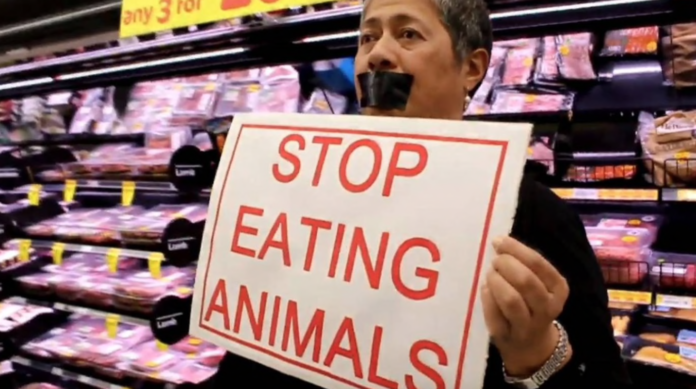 ‘Let me at them’: World reacts to vegan vigilantes who stormed Auckland supermarket

On Sunday a group of vegan protesters caused a national debate after storming St Lukes Countdown and blocking shoppers from the meat section.

During a tense standoff, vegan activists held up signs which said “stop eating animals” and “it’s not food, it’s violence”.

The news made international headlines and has since caused a stir across the globe.

Media from around the world including Australia, the UK and the US weighed in on the incident, with many questioning the hostility of the protesters.

Across the ditch, one Today host on Nine News slammed the protesters as “vegan vigilantes” and said he wouldn’t have been so patient as the customers in Countdown.

“I’ll give those cameramen something to aim their cameras at. If a vegan came between me and a lamb roast I would open him like a tin of beans. It would be on for young and old,” he said on Today.

“I choose to eat the beasts. Let me at them. Vegans are very passionate, and I understand why but really they must have eaten so much tofu to get the energy up to protest.”

For the most part, Vegans have focused on the cruelty our love affair with meat causes the animals themselves, but a far, far, far stronger argument of self interest can now be made for a vegan diet to combat the climate emergency.

The amount of extra resource used to grow a pound of flesh compared to plants is enormous and with synthetic meat around the corner, the ethical, moral, economic and environmental argument eclipse any ‘but it tastes better’ arguments.

The protest we saw last week was confrontational, and that’s the point. People need to be confronted.

The problem for meat eaters is that the the climate emergency is only going to get far worse and it is getting far worse far faster.

We will see more of these types of confrontational protests the same way we will start seeing a rapid rise in Extinction Rebellion type mass arrest events.

Many refuse to accept the climate emergency is happening, but with every day that passes, more realise the enormity of what is coming and the need to confront those too apathetic to change.

Last week was a glimpse of the future. It only gets far more confrontational from here.