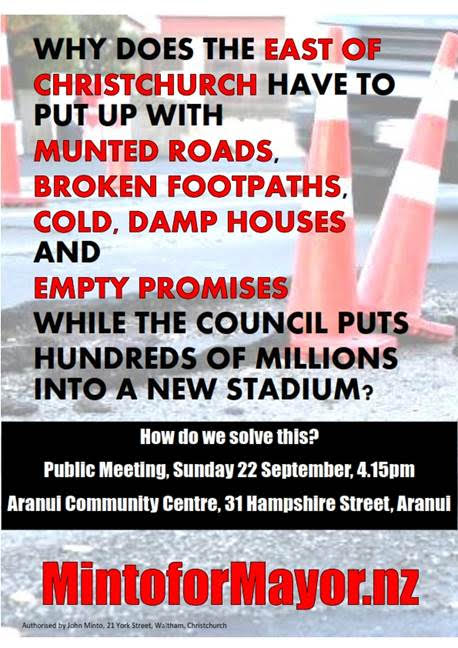 It was the ninth anniversary of the September 2010 earthquake last week, the first of the two big earthquakes to hit the city, but driving through some parts of East Christchurch you might think the earthquake was last week.

Meanwhile parts of the inner city are looking splendid – hundreds of millions have been poured into public sector projects and infrastructure that look amazing. Private property developers are all but invisible. They are land-banking, refusing to develop until their profits are assured. It doesn’t stop them from endlessly complaining though. The slow development is everyone else’s fault according to these experts at milking the system.

Property developers in the inner city are being given ratepayer handouts of $15,000 per apartment they build and the council has called for a report to see how much more support they can give the likes of Fletcher Building to increase their profits. Rates rebates for people buying these new apartments are being talked about on top of the handouts to developers.

Consider this for a moment: Christchurch City Council has given $8.5 million to developers building in the city centre from 2014 to 2018 (that’s the $15,000 handout for every apartment they build) for expensive apartments in the inner city. But the council refuses to give a single cent to rebuild or refurbish council housing destroyed in the earthquakes or abandoned since then by council refusal to renovate.

Christchurch is now about 500 council rental units short what it had before the earthquakes.

Just to make sure you understand that: In the middle of a housing crisis the council is pouring money into developers pockets to build expensive apartments but is refusing to put a single dollar towards housing for low-income tenants and families.

This week the local Chamber of Commerce made a big push for the council to sell assets so they could put more money into “maximising the opportunities” of the new, shiny, sexy (white-elephant) half-a-billion-dollar stadium the council has prioritised.

Naturally they didn’t explain how this was a higher priority than the needs of council tenants in uninsulated units who have been advised to put bubble wrap on their windows to keep out the cold.

Naturally the other two main mayoral candidates – Lianne Dalziel and Darrell Park – have been falling over themselves to suck up to business interests with families struggling on low incomes just an inconvenient distraction.