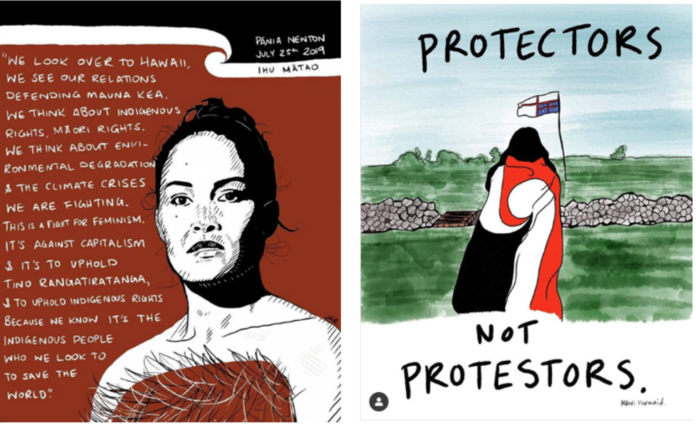 When Ihumātao suddenly went from a benign protest few were paying attention to into a cultural flash point utilising social media in a way that was in the full glare of the national and international media in the space of a week, Labour were stunned.

Like with the Nurse and Teacher union industrial actions before Ihumātao, Labour strategists didn’t appreciate the way social media were allowing union members to connect with each other, feel solidarity for a far more radical agenda and then be prepared to fight for that agenda.

The Prime Minister likes to define the word ‘transformative’ as whatever she can get a thin majority to agree to, the new social activism powered by social media militantly refuses to accept that definition of change and this new assertion of narrative and action surprised our political leadership. Everyone was used to timid Union Bosses and activists who go home before the traffic gets bad.

Social media and its ability to connect the front line soldiers of a social movement in real and urgent solidarity is fast becoming the new generator of collectivist action that won’t take empty words as an answer.

Online Clickbait activism has been previously written off in the past as shallow and without any actual meaning. Your protest might get 300 likes and a couple of hundred saying they will attend but when it turns out to be the same 30 people who protest everything, online activism was seen as fake frosting to a very tiny cake.

That has changed. Social media is now becoming a far more powerful bond between people who are collectively struggling as the same shared injustices are recognised and repeated in ways everyone impacted can resonate and feel.

Ihumātao is but the tip of a new spear. The next generation know the impact of losing 95% of Māori land in less than a century and believe the pittance handed out to previous generations for land confiscation is not reparations but an ongoing wound of colonialism. They draw strength from the pacifism of Parihaka, they see the ghosts in the land and hear the cry of anger that echo down through generations and link that injustice to the impoverishment of the present.

Such passion and focus on the wrongs and mistakes of our greedy racist forefathers grinds against the myth we tell ourselves about being so progressive when it comes to race relations in this country and such agitation spooks settler nation culture in NZ because the core of our economic prosperity is built upon stealing indigenous land and never paying for it.

“One law for all” beige Nu Zilind scream with foam whipped corners of spittle building like avalanches of rage, and it was this knee-jerk reaction that ignited the Foreshore and Seabed issue into a new confiscation grievance.

Join me for a quick skip down memory lane.

The whitest thing in NZ, the Marlborough Council, decided to allow rich prick boat shed owners who were building those boat sheds into Gin Palaces perched on pristine coastline, the right to sell those Gin Palaces. Local Iwi told the Marlborough Council that they couldn’t allow those Gin Places to be sold because it was on the Coastline and nobody had any clear understanding of who actually owned that because as far as Iwi were concerned, they did and these boat sheds had previously been allowed as a good will gesture, not as a claim of actual private ownership. The Marlborough Council (led by a Pom) exploded in white rage at the mere thought they had to consult Māori about who actually owned anything and pushed ahead with allowing rich prick speculators to bundle up these boat sheds as private property and sell them to each other.

Māori said, ‘right, off to Court to argue who actually owns this land if you are hell bent on privatising it”.

Out of this, Gerry Brownlee ran around the country huffing and puffing that ‘Da Maaaaaaaaaris want to steal all our beaches”. Don Brash delivered his Orewa Speech and every single white settler nation fear politically detonated like an atomic bomb and Brash came within inches of becoming the Prime Minister.

It is this backlash that Labour are all too acutely aware and fear waking with Ihumātao.

The strategy for Ihumātao is simple. Get this sorted before the start of 2020 because allowing this issue to drag into an election year would be a gift for Simon Bridges to exploit, but there could be no forced agreement from outside because the activists would see that as merely another extension of an injustice that has haunted that land from the beginning, the solution had to be Māori by Māori within a Māori context.

Or at least look like it was to the vast majority of NZ.

The Labour Party Māori MP heavy hitters were sent in and they invited the Māori King to participate. The new generation of Māori activists would likely baulk at such a patriarchal and corporate giant like Tainui having anything to do with this deal, but most Pakeha have zero understanding of such nuances and will see the decision as by Māori for Māori because if the activists reject a solution that sees Tainui buying the land off Fletcher Challenge, building a few houses and putting the majority of the land into a national park, the rest of NZ won’t have a problem with the solution, and once that happens, the protectors of Ihumātao lose the public support they’ve been so far empowered by.

You can see the Protectors realising this as they scramble to argue the Crown needs to find a solution, not Tainui.

Unfortunately, the one weakness of social media activism is that while it can be immediate, powerful and intense, it can also be fleeting. There is always another outrage, another issue that demands attention, another cause to champion.

The protectors of Ihumātao will need to make concessions to get that visit from Jacinda because Labour needs this settled before December. The single worst outcome is for this activism to be used as a wedge issue by National to win the 2020 election.

The double threat for Labour is that it could also be the birthing ground for a new Māori political movement and seeing as Māori helped win 2017 for Jacinda, that would be a devastating irony.

Everyone has skin in this game.