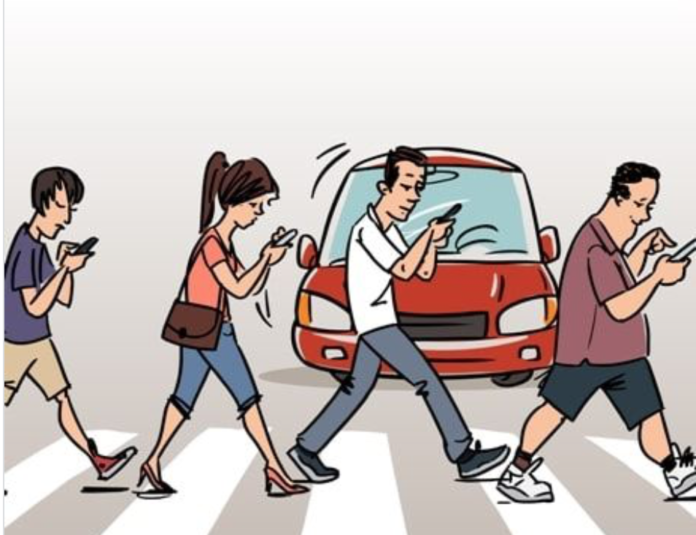 My apologies for not commenting much at the moment. I’m working on two big projects that are gobbling my time . One is the Trade Secrets doco which has become such a multi-headed monster and another I can’t talk about for a few months.

However I do have a couple of minutes this morning before I seize the day for a quick grumble.

Maybe I have just become more aware of it lately but people walking slowly across pedestrian crossings while txtng,reading their cellphones or having a phone conversation are really starting to annoy me and I have been trying to figure our why.

Yes there’s the safety thing – they should watch where they are going because pedestrian accidents world wide have increased as a result of using smartphones while walking.

And yes I know for some people it’s addictive behaviour.They are so hooked on screen life they are not only missing out on real life but many will pay for their obsession in later life with neck and back pain. So I am not without some understanding of their issue.

Why then do I get grumpy when people stroll across the crossing in front of me while working their phone? Well, I suspect it’s the arrogance that gets to me. It’s the ME people who don’t give a damn about what’s going on around them because they think that life is all about THEM that gets to me..

It’s that self absorption that has become the norm in our self- centred economic and political world I find annoying, because the ME society of neoliberalism is ultimately doomed to failure and I want a return to the WE society where we help each other and, as a by product , we help improve our own lives.

On the other hand there are lots of folk who walk across the pedestrian crossings at my local shopping centre who give a small “thank you” wave and a bit of a smile to drivers who stop for them.

So there you go – balanced journalism