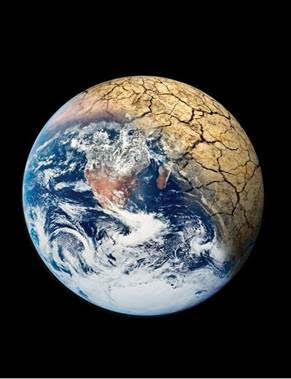 “WE HAVE A PROBLEM, HOUSTON.” were the words used by the Apollo 13 astronauts to announce their spacecraft’s stricken status. Miraculously, the astronauts and “Houston Control”, working together, managed to overcome this “problem”, and the crew of Apollo 13 were returned safely to Earth.

Forty years later, the inhabitants of “Spaceship Earth” also have a “problem”. Unfortunately, they do not have a “Huston”. This time the “crew” are going to have to sort things out by themselves.

The ‘problem within the problem’ arises out of the fact that 85 percent of the energy utilised by human-beings is derived from carbon (a finite resource) and the balance is provided by machines and structures manufactured and constructed by means of carbon-based processes – all of which must be regularly replaced. Put simply, the skeleton of the advanced technological civilisation we inhabit is made out of coal, oil and natural gas – plus the objects they allow us to make. Remove these things and our civilisation will collapse.

The use of coal, for example, is critical to rapidly developing nations such as China and India – just as it was to the industrialisation of Europe and North America. The massive coal-mining venture getting underway in Queensland is being undertaken by Indian capital on behalf of Indian energy generation and manufacturing. A similar massive coal-mining exercise is underway in East Africa on behalf of the Chinese. The American coal industry, thanks to President Donald Trump, has resumed its decapitation of mountains to keep the furnaces fed.

These developments will pour gigatons of additional CO2 into the earth’s atmosphere – worsening the already dire consequences of anthropogenic global warming.

“Keep it in the ground!” Cry the young defenders of the planet. “Blockade the coal ships! Halt the coal trains!” Would that it were that simple.

Coal is not burnt simply to produce mechanical and electrical energy. Some of it is used to make steel. Try to imagine a world without steel. It’s not easy. So much of the infrastructure of the present depends upon an endless supply of high-quality steel.

The infrastructure of past civilisations depended on implements made of iron. What’s needed to make iron? Charcoal – carbonised wood. The continuous burning of trees to make charcoal is one of the principal causes of the deforestation of the Northern Hemisphere – an unqualified ecological disaster. And, when the trees were gone, our European ancestors moved on to digging up the petrified forests of the planet’s distant geological past – otherwise known as coal.

“We are stardust/ billion year old carbon/ we are golden/ caught in the devil’s bargain”, sang Joni Mitchell in her hit song “Woodstock”. And it’s true: humanity and carbon are inextricably bound together. In mastering the extraction of energy from carbon, human-beings were simultaneously mastering the planet.

Except, of course, we weren’t. The planet has its own means of mastery, and we are beginning to feel them. The scientists insist that the only way we can ensure our species’ long-term survival is to unwind its extraordinary relationship with carbon. We must solve the problem within the problem.

In practical terms that can only mean unwinding civilisation itself. Humans will only cease being a threat to themselves, and others, when they give up using carbon-based products to smelt metals, manufacture cement and extrude plastics. Only when our species’ collective footprint  is light enough to be blown away with the leaves on an autumn wind, will the planet, and all the other species that dwell upon it, be able to breathe easy.

Such a footprint will never be left by a species numbering 9 billion.

Does humanity grasp this: the brutal, but inescapable, reality that lies at the heart of the problem within the problem of Climate Change? That to come through the next 100 years, the human species will, somehow, be required to reduce its present population by nine-tenths?

Think of the Holocaust. In 1939, there were approximately 9.7 million Jews living in Europe. By 1945 there were fewer than 4 million. Two-thirds of the Jewish people living in Europe had perished at the hands of the Nazis. The dismantling of our carbon-fuelled civilisation would be accompanied by an even more devastating process of depopulation: not two out of every three would vanish, but nine out of every ten. Will those billions of doomed souls go gently into Gaia’s good night? Or, will they rage, rage against the dying of human civilisation’s light?

Some in the West are openly talking about refusing to have children. Others speak hopefully of universalising the achievements of feminism, Such a victory would, if the experience of those countries in which women have won equality is any indication, gradually reduce the number of human-beings on the planet. Would this depopulation option occur at a pace and on a scale to avert planetary catastrophe? It seems unlikely. Especially when patriarchy in all its forms would have to be defeated first. That will not be easy!

It’s not just men. Around the world, cities and even nation states are declaring “Climate Change Emergencies” in recognition of the diminishing amount of time humanity now possesses to stabilise the phenomenon of global warming. All well and good, but the truly chilling feature of such declarations is what happens after they are made. Which is, in nearly every case, nothing of any use whatsoever.

Perhaps, in the end, the planet – Gaia herself – will solve the problem. Perhaps a virus – as yet unencountered by any human-being – is already mutating away in the mountain rain-forests of equatorial Africa. Perhaps it will break free of the trees. Perhaps, like Ebola, its lethality will be in the vicinity of 90 percent.

Will it be a good or a bad thing, I wonder, when humanity’s bright blue spacecraft is stricken by this final problem, that no Huston will be standing-by to rescue the crew?