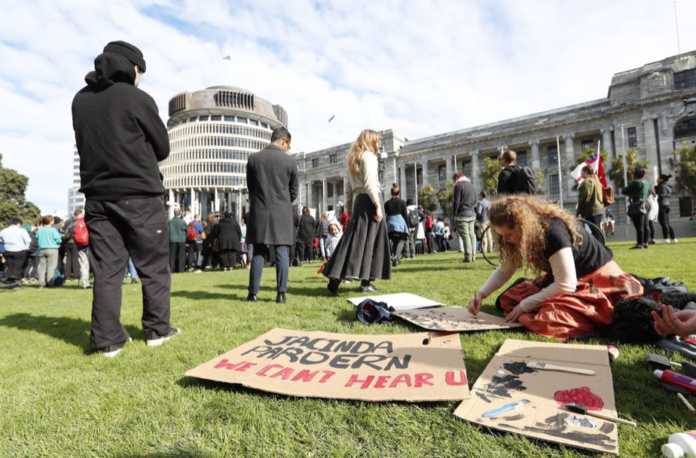 Hundreds of Wellingtonians have gathered on Parliament lawns in peaceful solidarity with Ihumātao, as part of a wider national day of action. They are expected to perform a mass karakia and waiata in unison, and reflect on the kaupapa of sacred whenua.

Many have brought items that represent their connection to sacred earth, sharing stories about their own land struggles and the reasons why they support this cause today.

Spokesperson Matariki Roche says, “Today’s action is especially important in light of the increased police presence at Ihumātao just last night. We are gathering to send our tautoko, our karakia, and waiata in order to channel our collective energy for kaitiaki on the whenua”.

She further states, “People were asked to stand in a circle around the sacred earth items and the kete for koha and messages of love. This has been done because, following the attempts to separate supporters and the kaitiaki, the organisers wanted to ground our solidarity in togetherness.”

Great care has been taken by organisers to guide the mauri of the event and to uphold the kaupapa of rangimārie.

We continue the call for the government, Fletchers and Auckland Council to return Ihumaatao to mana whenua.