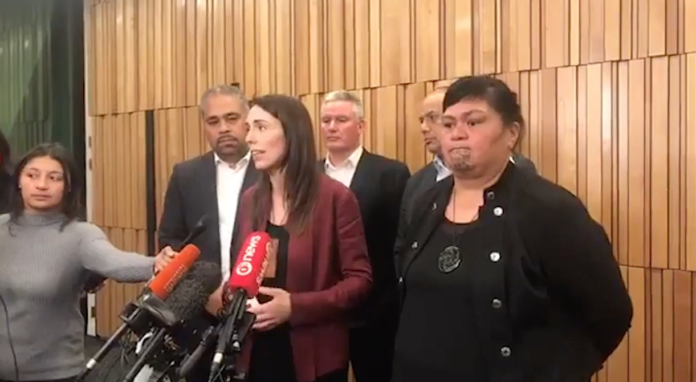 As Kelvin Davis stood in the rain speaking to Oranga Tamariki protesters this week, they shouted abuse at him.

“Oh you have balls now”, chanted some.

The anger thrown at Māori MPs by protestors on that issue, on the Justice issue, the Health issue and the vast censorship of Māori voices in the mental health report have seen incandescent activists from across the protest spectrum attacking Labour with all the fellowship and warmth of trans activists eviscerating gender critical feminists.

There is a suggestion that Labour and NZ First are somehow not on the same page over Ihumātao. I’d suggest it’s a separation of difference that is incredibly tiny and measured in the millimetres.

The heat this latest protest has erupted from the Left of the Party occurs at a time Labour desperately need unity going into the next Election 12 months out with a National Party on a staggering 45%.

Jacinda is not going to Ihumātao, and her language on the issue is couched very much in the centre, she is certainly not calling for some land revolution here. Her moderation has been widely criticised by almost all the major activists commenting on this issue.

The schism within Māoridom over Ihumātao is multi-faceted. On one level it is generational. Older Māori leaders who have been forced to accept the pittance paid out in compensation rather than nothing vs the younger generation whose knowledge of colonisation and the historic tragedy of land confiscation refuse point blank to accept that pittance.

Then there is a racial schism between Māori and Settler Nation NZers. The core economic plank that has built NZ is the ability to steal land off the indigenous people and prosper from that theft. Threatening to over turn the rort that protects private land rights by recognising that injustice will provoke a backlash from Cracker Kiwis who will be foaming at the mouth while screaming about the ‘Maaaaaoris’ and “One Law For All”. This is to be avoided at all costs because when white people get spooked into thinking they can be publicly racist, things like Don Brash happen.

With so many long standing interests and twisted manipulations that manifest in the present as outrageous social injustices against Māori, trying to solve all that before the next election seems as optimistic as hoping Donal Trump gets a standing ovation at a Feminist Vegan Folk Rock Festival.

Here is the deal that needs to be cut within a month so that this is not on the political agenda leading into the election.

The Government buys the land. Instead of building 400 homes, Fletchers builds 100 affordable housing on a tiny bit of that land while ensuring the 40 houses for the local Iwi goes ahead. The rest of the land goes into a National trust and treasured as a historically important site.

By giving the local Iwi what they negotiated for, by giving Fletchers a much smaller piece of the pie, while giving Activists most of what they want, you hopefully cauterise this wound before it starts getting infected by European NZers scaremongering about private ownership rights being over turned by Comrade Jacinda and her anti-Gun Communists.

NZ First will mock the cosmopolitan nature of this urban protest, but don’t think Labour aren’t wishing this would end just as much as Winston does. No one wants to revisit the Foreshore and Seabed meltdown.