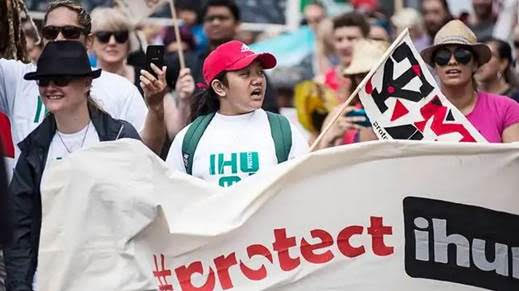 IHUMATAO’s intersectional celebrations, dubbed derisively as “Wokestock” by right-wing commentator, Matthew Hooton, are being watched by unfriendly eyes. The Settler Nation has zero tolerance for the politics of radical decolonisation.

While progressive Maori and the Pakeha Left were raising their glasses to Jacinda’s belated intervention on Friday evening, those responsible for preserving the status quo were setting theirs down in icy disbelief. What did the woman think she was doing? Has she no idea how badly all this could end for her party?

It was ever thus. The initial eruption of “people power”, followed by the Establishment’s remorseless re-imposition of control. First: the planting of trees and a policeman singing in harmony with the crowd. Then: the fear blowing in, cold and unforgiving; blighting all the bright colours; silencing the songs.

It is always dangerous to remind the colonisers of the world they have extinguished. To provide them with even a glimpse of that world is even more perilous. It proves to them that the culture they conquered and left for dead can be brought back to life. Ihumatao has smouldered for 156 years. The effect of the mass occupation of the past week has gifted it a sudden inrush of oxygen. Now there are flames amongst the fern.

Those flames glitter in the narrowed eyes of the watchers. From the ill-educated and ill-disciplined the responses are already forthcoming. Angry posts on Facebook and Twitter, filled with the raw racism of those for whom the possession of a white skin constitutes their sole claim to superiority. Reading these, it is difficult to decide who they hate the most: Maori, or the Pakeha who support them? Whichever it is, their animosity is palpable.

For the moment, however, this raw racist response is little more than an infuriated buzz. Ten thousand voices are speaking at once, producing little more than an indecipherable babble. It points to the current lack of organisation and direction in the Settler Nation’s political reaction to Ihumatao. The voice of a leader has yet to assert itself above the rising racist din.

This anarchic phase will not last for long.

It will be interesting to see whether it is the Right, or the Left, which first attempts to organise the reaction to Ihumatao. The Settler State’s response to the Foreshore and Seabed crisis was led, at least initially, by the Labour leader, Helen Clark. It was she who called the organisers of the Hikoi “haters and wreckers”, and it was her Attorney General who drew up the Foreshore and Seabed legislation. This taking of the initiative by Labour, though it cost the party dearly in the Maori seats, was, almost certainly, what allowed it to retain sufficient Pakeha support to hold-off the 2004-05 challenge from National’s Don Brash.

The force of the Right’s assault on Maoridom was formidable. Brash’s Orewa Speech mobilised the most conservative elements of New Zealand’s settler society in ways not seen for decades. Had National won the general election, it was pledged to remove all reference to the Treaty of Waitangi from legislation, wind up the Treaty Settlement Process and abolish the Maori Seats.

Such was the fury inspired by the prospect of Maori enforcing their customary rights on the nation’s beaches. Only two percentage points separated the Labour and National Party Vote in 2005. New Zealand escaped an “Iwi/Kiwi” war by the skin of its teeth.

Small wonder that Labour’s Maori caucus is so conflicted. The prospect of a large and voluble land occupation developing sufficient political momentum to void the legal status of Maori land confiscated unjustly by the Crown in 1863 has clearly sent shivers up and down its collective spine. If one victim of the raupatu of the 1860s can secure the restitution of their lost land, then why not all the victims? The absolute prohibition against the return of privately held property to its original owners is all that keeps the Treaty Settlement Process alive. Do away with that prohibition, and the Settler Nation will erupt in fury.

But, if Ihumatao is not returned, or at least transformed into a public space from which large scale development is excluded, then Labour’s Maori caucus’ grip on the Maori seats will be significantly – perhaps fatally – weakened.

The same may well apply to Labour’s strong support among progressive young New Zealanders. For Jacinda to gaze upon Ihumatao’s celebration of diversity and not be moved would raise all manner of doubts. It’s one thing to want to change New Zealand, but not be able to because the nation’s bureaucratic machinery has rusted into immobility. Quite another, however, to look at the change her most fervent supporters are making – and turn away.

But, if she remains true to her vision of trailblazing a new politics of kindness, by rescuing Ihumatao, what then?

The Act Party has already put in its bid to lead the backlash. By 9 o’clock on Friday 26 July – barely two-and-a-half hours after Jacinda halted development at Ihumatao – David Seymour had released a statement to the media.

Seymour is but a scout for the main force of the Settler Nation. The National Party’s troopers will not take long to move up to the front lines if Labour is brave enough to make the next election a referendum on whether or not the fruits of colonisation remain firmly in the hands of Pakeha; or are shared out more equitably among the citizens of a new nation: The Bi-Cultural Republic of Aotearoa.

That would be an election worth voting in.