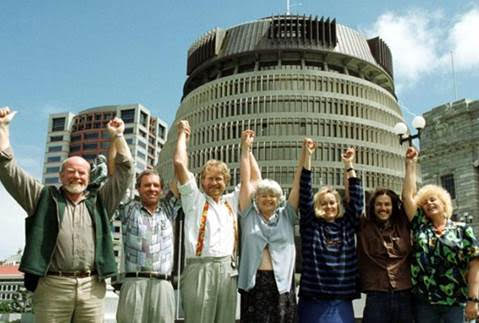 THERE WAS A TIME when it was really quite hard to dislike the Greens. Back in the days of Rod Donald and Jeanette Fitzsimons; of Nandor Tanczos and Sue Bradford; of Sue Kedgley and, yes, even the rather dour Keith Locke. There was also that bloke who called himself the “Musterer” (instead of the “Whip”) whose name I have completely forgotten. [Ian Ewen-Street – thankyou Google!] When they first made their way up the steps of Parliament, back in 1999, I called them “The Magnificent Seven” – so perfectly did they cover all the bases of ecological politics.

If you counted yourself among the Left of New Zealand politics, and you didn’t vote for the Greens, you needed to be able to supply yourself with a very good reason why not. The Party made not voting for them a lot harder by being so damn nice. They practiced politics in the way most people agreed it should be practiced: by sticking to ideas and to the policies those ideas gave birth to; by refusing to get down in the gutter with those politicians who seemed to regard politics as an excuse for being personally vicious and cruel.

On Wednesday afternoons, during the General Debate, you waited eagerly for the Greens’ turn to speak. It always came as such a welcome relief from the personal attacks, the snide remarks, and the puerile arguments which their fellow MPs resorted to. Invariably, the Greens’ contribution would be about something real and important. There was always an argument for listeners to follow – an argument based on, and backed up by, facts. You know, evidence. It was like the sun’s rays breaking through clouds: proof that somewhere out there, beyond all the bullshit and braggadocio, there remained a world of light.

It is still possible to catch an echo of the Magnificent Seven in the 2017 intake of Green MPs. Chloe Swarbrick, in particular, would not have been out of place in that special company. Sadly, however, Swarbrick is the exception. For the most part, her Green party colleagues have lost that tremendous likeability that made it so hard for the Left to vote for anyone else.

Partly, that’s because the Left itself has changed. Always among the Greens there was a powerful libertarian current. By and large the Greens did not like the idea of the State, or big corporations, or the petty tyrants who run so many small businesses, interfering in the harmless and victimless activities of their fellow citizens.

No one appealed to the libertarian fraction of the electorate like Nandor Tanczos. With this dreadlocks, his skateboard and his green hemp suit, he became a poster-boy: not only for the legalise marijuana movement, but for that fiercely contrarian bunch of New Zealanders who, without him, has veered over the edge into anti-vax and anti-1080 fanaticism.

But, it’s not just the unfortunate way in which the vacuum created by Tanczos’ departure from political life has been filled that’s the worry. Libertarianism, itself, has largely disappeared from the ranks of the twenty-first century Left. Even worse, in the ideological space formerly occupied by libertarian leftism, New Zealand now finds its exact opposite: Left Authoritarianism.

It does not require a very long acquaintance with the Green variety of Left Authoritarianism to realise that, in 2019, the number of activities defined as harmless and victimless has become vanishingly small.

To be fair, there has always been an element of authoritarianism present in the ranks of the Greens. On a number of issues – the Treaty of Waitangi in particular – those responsible for vetting potential candidates have always exercised zero tolerance for anything other than the full-recognition, tino rangatiratanga, line. Until relatively recently, however, this “politically correct” element of the Green Party apparatus was encouraged to keep itself out of sight. Today, however, among party activists and MPs alike, it operates loudly and uncompromisingly in plain sight.

The political and electoral consequences for the Greens are likely to mirror those which overwhelmed the Left generally in the early 1980s. The 1981 Springbok Tour had radicalised a great many New Zealanders who, in its aftermath, were eager to keep pushing for social change. For many Pakeha leftists, however, the concurrent upsurge in Maori nationalism proved too confronting. The aggressive pursuit of “Maori Sovereignty”, in particular, drove many Pakeha out of the so-called “New Social Movements”, where the sovereigntists were most active.

Organisations which considered themselves progressive, such as the aid organisation Corso, may have decked themselves out in the trappings of bi-culturalism, but only at the cost of making insincerity an unwelcome requirement of membership. The upshot was an emptying-out of many of the institutions of the “White Left” – a not inconsiderable number of whom took refuge in the much friendlier ranks of the Labour Party, which, in the early 1980s, boasted a mass membership in excess of 100,000.

With the benefit of hindsight, it is clear that the Greens, founded in 1989, attracted a large number of members for whom the precepts of identity politics formed the core of their political ideology. The Greens’ consensus-based decision-making processes allowed these ideologues to operate for many years within the party without the wider electorate paying them much attention. While the Greens were led by the likes of Rod Donald and Jeanette Fitzsimons, the influence of the “id-pols” could be managed. Following Donald’s death and Fitzsimons’ departure, however, the Greens parliamentary line-up has become at once less likeable and less representative than the seven-strong caucus which marched up Parliament’s steps in 1999.

The great problem now facing the Greens is that Labour finds itself in possession of the most likeable political face New Zealanders have encountered for many decades. When set against “Jacinda”, the Greens’ James Shaw comes across as a low-energy compromiser. Meanwhile, his co-leader, Marama Davidson, strobes identity politics in a fashion calculated to make a sizeable majority of the electorate feel decidedly queasy.

Neither Shaw, nor Davidson, is likely to hold in place many voters not already completely sold on the Greens’ brand of identity politics. The party is fast taking on the character of a political cult: filled with zealots determined to enforce their policies on what we should be permitted to drive; what we should be encouraged to eat and drink, what it is acceptable for us to think; and what we should be allowed to say.