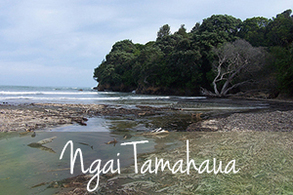 Treaty Minister served with trespass notice – NGAI TAMAHAUA
Minister of Treaty of Waitangi Negotiations Hon. Andrew Little was served with a trespass notice on Friday (28 July 2019) issued by Ngai Tamahaua – a Hapu of Whakatohea opposed to the government-backed trust the Minister has recognised to settle Treaty claims in their rohe (territory) of the Eastern Bay of Plenty.
“Our Hapu official intercepted and halted Mr Little’s limousine on Waiotahe Bridge State Highway 2 at 4:48pm on Friday.  The government motorcade attempted to pass through our rohe following an earlier incursion connected with the signing of an Agreement in Principle with Te Whanau a Apanui further up the coast,” said Hapu Chair Peter T Selwyn, “our official identified Mr Little in the rear seat and after the chauffeur had read the trespass notice it was handed through the window of the limousine and Mr Little was then told verbally that he had been served. The motorcade was then allowed to exit the rohe.”
Mr Selwyn said: “Minister Little’s violation of our rohe was provocative as he has acknowledged in previous correspondence our Hapu’s firm determination that should he try to enter our territory without our permission he would be immediately trespassed and escorted out.  This was indeed actioned on Friday and he would be most unwise to attempt another sortie now he has been formally served.”
Mr Selwyn disputes the integrity of the Minister’s public statements that he will engage with Hapu as well as the trust in a ‘parallel’ negotiation whilst the Waitangi Tribunal is shortly to begin a comprehensive inquiry: “The Minister simply has no credibility when he states he will talk to Hapu because he has not done so and has in fact continued to fund the trust’s negotiators even though he claims negotiations have stopped. So long as he and his agents continue to recognise and fund a phony trust and not recognise Hapu sovereignty then we shall continue not to recognise him and his agents. They are not invited into our country and will be expelled accordingly.”
The notice was made under the Trespass Act 1980 and specifies that Mr Little is prohibited from entering the rohe of Ngai Tamahaua as is his Office of Treaty Settlement entourage. Trespass action under Common law and tikanga are not prejudiced by the notice.
The Hapu legal view is that the river corridors are customary land and that non-members can be trespassed from them under NZ law whether or not they are in transit, on foot or in vehicles, on roads or on bridges.
“The New Zealand government’s position with respect to Whakatohea is untenable. Minister Little ought to terminate the mandate recognition of the trust before any more good will is shredded,” said Mr Selwyn.
ENDS
———————