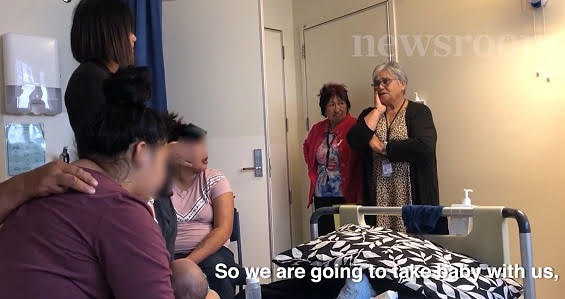 IT IS DIFFICULT to know where to begin with Melanie Reid’s and Newsroom’s latest investigation into Oranga Tamariki. In the same way that David Lynch’s movie “Blue Velvet” begins with a single shocking discovery, which leads the hero deeper and deeper into a corrupt and violent world; Reid’s 45-minute video, “New Zealand’s Own ‘Taken Generation’”, exposes the viewer to aspects of life in this country that, until this week, have been quite deliberately, and ruthlessly, kept hidden from the public. That this collaborative act of concealment (involving, as it does, not only the child welfare services, but also the Family Court, the DHBs and the Police) has been so successful for so long is due, almost entirely, to the fact that its victims are members of the Maori underclass.

Reid estimates that the “uplift” of Maori children from their biological parents by child welfare social workers – often assisted by the Police – is occurring at least three times a week. The removal of these children, who range in age from just a few days to 14 years, is authorised by Family Court orders which, astonishingly, permit the use of “reasonable force” to separate parents from their children. That this regularly involves burly police officers carrying distraught and screaming children from their family home is a fact which Oranga Tamariki is very keen to keep from the public.

“Oranga Tamariki”: the name itself is proof of our deeply cynical state’s capacity for misrepresentation. In English, the words “child welfare” carry overtones that are far from positive. By giving this oft-criticised and disgraced government department a Maori name, the bureaucrat’s responsible clearly hoped to bury those negative connotations while, at the same time, conveying a “Maori friendly” message to impoverished Maori communities which had every reason to expect the opposite.

The cynicism doesn’t stop there, however. At the sharp end of Oranga Tamariki’s enforcement operations; especially, it would seem, child uplifts; it has become a case of Maori versus Maori. Acutely aware of how bad it would look to have middle-class Pakeha social workers ripping babies from the arms of their Maori birth mothers, the department has recruited Maori social workers to do the job for them.

Played out in Reid’s story is the bleak spectacle of Maori women in the employ of Oranga Tamariki confronting the angry and (in most circumstances) powerless whanau of the child about to be uplifted from its terrified mother. Throughout Reid’s harrowing video, the viewer is acutely aware that, if the recorded interactions had not been unfolding in the presence of an award-winning Pakeha journalist and a courageous pair of Maori midwives – linked by cell-phone to a seasoned lawyer – then the 19 year-old mum at the centre of the drama would have lost her second child to the same British couple who, with Oranga Tamariki’s help, had been entrusted with her first.

None of this awfulness would be possible, of course, without the active assistance and institutional protection afforded to Oranga Tamariki by the nation’s DHBs. These latter, through their security and communications staff, are, in almost every case, able to ensure that the tragedies unfolding within their walls are never reported beyond them. The clear priority of the DHBs is to ensure that the media “protocols” protecting the blissful ignorance of “Middle New Zealand” are strictly enforced. The sheer ruthlessness with which they go about facilitating these uplift operations is one of the most frightening of Reid’s revelations.

The men and women I feel most sorry for (apart, obviously, from the mother and child and their whanau) are the police officers brought in to enforce the Family Court’s uplift orders. I do not imagine that many of them signed-up to rip babies from their mother’s arms. Nor can it be easy to tell anguished whanau members that they will be arrested if they do not accept Oranga Tamariki’s faits accomplis. Moreover, these uplifts are, potentially, extremely dangerous situations. The police officers involved have every right to fear assault, or worse, when emotions are running so high. That they are being deliberately inserted into such highly-charged confrontations, at least three times a week across the country, is unconscionable.

This is the enormous virtue of Reid’s and Newsroom’s investigative journalism. It digs below the superficial stereotypes that allow so many of us to dismiss the anguish of “these people” as the inevitable outcome of their irresponsible lifestyles. That they are brown and say “yous”, instead of “you”, only makes it easier for middle-class Pakeha to ignore their pain. Oranga Tamariki, the Family Court, the DHBs and the Police have made it possible for those Kiwis who have made their peace with race-based social injustice to go about their lives without the slightest awareness of the tragedies unfolding, every night, in suburbs they will never visit.

Reid and Newsroom are, of course, already feeling the lash of official displeasure. Oranga Tamariki are attempting to force edits in Reid’s video. The Hawkes Bay DHB has chastised one of its board members for daring to speak out against the incident recorded by Reid and her camera-operator. The Minister for Children, Tracey Martin, is unapologetic: the uplifts, she says, will continue. The Prime Minister, Jacinda Ardern, is conflicted. Reid’s footage depicts a world a long, long way from the “politics of kindness”.