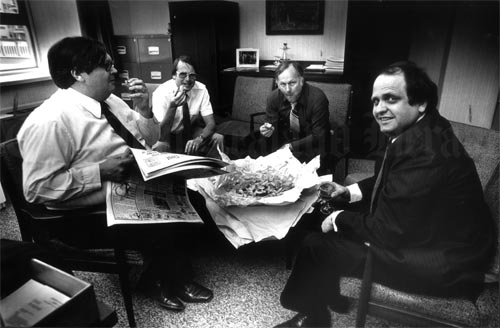 The Fish and Chip Club

Under the third Labour government, Roger Douglas ran a reform process of the Blitzkrieg variety.  Essentially the idea (which came from the Right in the US) was to carry out state sector reform (and destruction) so quickly and so seamlessly that it would take the public years to understand what had happened.

In the field of education, the 1988 working party (headed by Brian Picot, a supermarket magnate) was quickly and ruthlessly driven into a model of school choice and competition, called Tomorrow’s Schools, and the reforms introduced, including a whole new Education Act, all within a year.

During that time, David Lange as minister used his mana, his quick wit and quite a lot of anger (after all, he was having problems of his own) to defend the boundaries of his policy, slaying all objections and assuring everyone that the reforms would be for the best.  There were TV ads soft-soaping the changes, copies of the reform book were everywhere, and it all happened very, very quickly. Blitzkrieg.

My avid fans (hi, you two) will know what I think of the past thirty years of schooling, so I am not going into that again.  I am basically in strong agreement with most of the recommendations of the current working party and ministerial direction. I went to a hui in Auckland yesterday (the Quality Public Education Coalition’s AGM) and listened to a panel of education leaders.  There is also strong sectoral support for change.

But what was discussed was the need for an inclusive, consultative process, with all those involved in education being given time to tweak and improve the model.  It all sounds very rational, but it gave me a squidgy feeling in my tummy.

After Labour did it’s worst bringing in a market choice agenda for education, National, much more private-sector oriented, spent a huge amount of time in the 1990s trying to extend the model in at least two respects.  The first was the proposal to devolve teacher salary bargaining to schools, and the second was a range of reforms to bring the private sector in to state schooling.

The epic battle over the bulk funding of teacher salaries, between the unions (for whom the policy was almost certainly a death knell) and the government (Lockwood Smith was the Minister during most of the period) was eventually won by the unions.  By using a gradualist approach, the government allowed debate to catch up with reform. Did we really want 2500 schools to each have to negotiate salaries of their own staff? No, of course we didn’t. Claptrap.

Similarly, Lockwood Smith used a model of ‘piloting’ options which was intended to garner support for change, but ended up providing a space wherein opposition could grow.  National spent 9 years having to patch a poorly conceived Act (e.g. school zoning laws had to be changed 3 times in the period) and managed no further large market reform of schools.

In general, the most powerful people in the country support the market reforms of 1989 and think they did not go far enough.  There is an active agenda to oppose the current major new policies. The media always give huge space to establishment and anti-government views, so articles pop up all over the place.  A few weeks ago, one, written by one of the Treasury architects of the 1989 reforms, defended them strongly and ran an anti-Ministry, anti-bureaucracy argument. Stuff ran it widely in their newspapers and online. I immediately penned a research-based response answering his concerns and sent it to Fairfax.  No response. No publication. So one side gets publicity and the other does not.

At the meeting yesterday I warned that the forces of Mordor were amassing and that a slow, steady reform process would allow the agenda to be derailed by frequent incursions.  It is already happening.

What is needed here is some very swift and skilled political management.  Which bits can be done quickly? Which can be more consultative? What are the risks? (Mordor must be taken seriously – you do not just ignore powerful enemies).  Treasury ran the 1989 reforms using the political weapon of Blitzkrieg. What is the strategy here? What model is being used? How can success – so important to the tamariki of Aotearoa into the future – be assured?

I wish the Minister would start talking a lot more, and more publicly, about the need for reform, unpicking the ethnic and class apartheid that has grown up under the current law, ensuring people stay in their local communities and get an outstanding education, and guaranteeing, as a priority, the best possible schooling for all, including those who currently miss out (are disabled, or excluded from school, or continually punished).

I am looking for a rights-based, child-based schooling system that values excellence in teaching, learning and fostering emotional intelligence and a sense of community throughout the nation. We have it in us to once more be the glowing system of educational excellence, as we were before the market wrapped its claws around our schools in 1989.