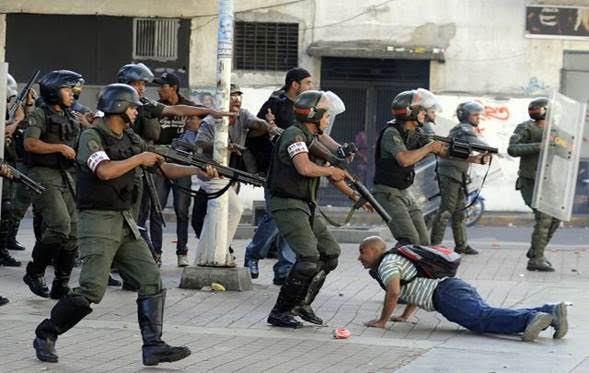 POLICE NUMBERS just topped 13,000. Forty years ago there were fewer than half that number – considerably fewer. Astonishingly, we now have almost as many cops as we do soldiers. At last count the New Zealand Defence Force numbered 14,921. Put those numbers together and the state’s coercive potential turns out to be not far shy of 30,000 highly-trained and fearsomely-equipped men and women. Those who allow expressions like “revolution” and “class war” to trip so merrily off their tongues should be required to explain where their 30,000 highly-trained and fearsomely-equipped men and women are currently hiding – just waiting for the word.

Proclaiming class war without a large force of armed citizens at your back is a very dangerous thing to do. Just ask Juan Guaido, Venezuela’s CIA-trained “Interim President”, how much luck he’s having overthrowing his country’s democratically-elected president without the support of either the Police or the Armed Forces.

Guaido can call the Venezuelan middle-class on to the streets and encourage his far-right student supporters to throw stones at the riot cops, but so long as President Maduro’s police officers and soldiers remain loyal, Guaido’s coup d’état will remain a busted flush. In the aftermath of this past weekend’s concerted campaign to force open Venezuela’s borders with Columbia and Brazil, Guaido’s only real hope of success lies in the USA and its reactionary allies lending him some armed men and women of their own.

Holding back all that stock-piled US “aid” and preventing all those Venezuelan emigres from flooding into the country is, therefore, crucial to the survival of Maduro’s Chavista regime. If the borders are forced open, then the way will be clear for the US equivalent of Russia’s “little green men” to slip across and start doing to Venezuela what Vladimir Putin’s soldiers-in-mufti (fighting alongside local rebel groups) did in Crimea and Eastern Ukraine. If you’ve been wondering why Maduro is going to such lengths to prevent the breaching of his country’s borders, then wonder no more.

Not that you’ll hear the scores of journalists dispatched to cover the “liberation” of Venezuela from its socialist “dictator” talk about any of this. There has, to date, been almost no coverage of the fact that neither the Red Cross nor the United Nations’ relief agencies will have a bar of Guaido’s “humanitarian” effort. Again and again these organisations have attempted to alert the Western media to the fact that by so thoroughly politicising the delivery of humanitarian aid, the US and its allies have betrayed their real (and far from humanitarian) agenda.

Had these journalists been sent to cover the Trojan War, they’d have loudly insisted that the citizens of Troy were morally obliged to haul the departing Greeks’ giant wooden horse inside the city walls. Twenty-four hours later, as Troy’s temples burned, and its inhabitants were put to the sword, these same journalists would invite the watching world to join them in celebrating the “restoration of Trojan democracy”.

The story is very similar with France’s Gillets Jaune. In spite of weeks of at times violent confrontations with the French authorities, and thousands of arrests, the “Yellow Vests” are no closer to their goal of evicting President Emmanuel Macron from the Élysée Palace. Notwithstanding their profound distaste for the job they’ve been given, the French Police continue to obey the brutal orders of their political masters.

A revolution without arms does not remain a revolution for very long. Just ask the unfortunate Chileans who fell under the killer blows of General Augusto Pinochet in 1973. They may have elected Salvador Allende, a self-described Marxist, as their President. Their Popular Unity Coalition may have won election after election. But, as a democratic government, they were obliged to persuade the unconvinced half of the Chilean electorate that the revolutionary changes the Left was seeking were worthy of their support. Not to simply impose them, regardless. This they did not do.

“It was difficult, it would take years to understand that what was so exhilarating to us was menacing to those who felt excluded from our vision of paradise. We evaporated them from meaning, we imagined them away in the future, we offered them no alternative but to join us in our pilgrimage or disappear forever, and that vision fuelled, I believe, the primal fear of the men and women who opposed us … [T]he people we called momios, mummies, because they were so conservative, prehistoric, bygone, passé … [W]e ended up including in that definition millions of Chileans who … should have been with us on our journey to the new land and who, instead, came to fear for their safety and their future.”

Our own progressive coalition government could benefit hugely from reading Dorfman’s memoir. Proposing measures that cause a large number of voters “to fear for their safety and their future” is never a wise course of political action. And those who urge the government to simply ignore and/or roll over the top of the “greedy fucks” who raise objections to its policies should be required to answer the question which veteran left-wing organiser, Matt McCarten, always asks of those demanding revolution and class war:

To be followed immediately by: “And will it defend your revolutionary cause with the ferocity of 13,000 police officers and 14,921 members of the New Zealand Defence Force  fighting to protect the status-quo?