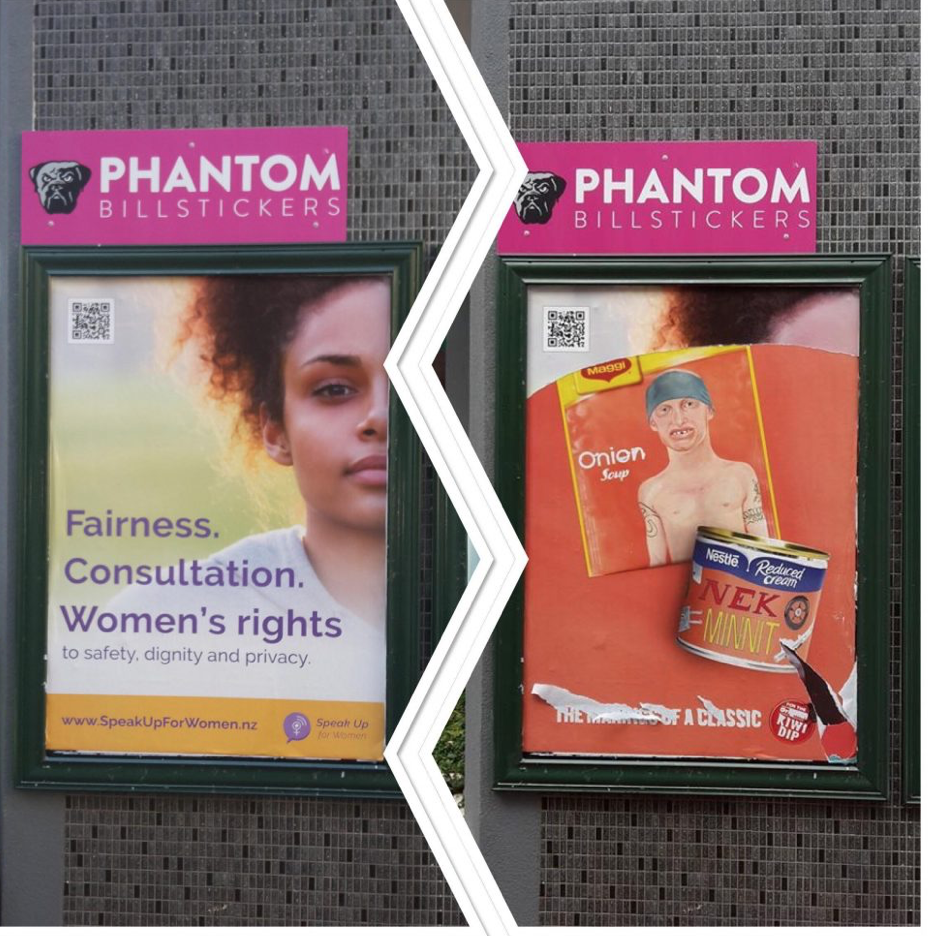 Today, campaign group Speak Up for Women has received notification from Phantom Billstickers that their poster campaign calling for public consultation on the controversial Births, Deaths, Marriages, and Relationships Registration Bill will be removed from over 60 sites from Auckland to Invercargill, in a move that is being described as reactionary and anti-free speech.

The media company allegedly received ‘four or five’ complaints from members of the public over the weekend, in response to the posters.

Jamey Holloway, Managing Partner of Phantom Billstickers said “[your] campaign has been accepted in error and will be withdrawn as soon as logistically possible.”

Wellington: Before and after.

Ani O’Brien, Speak Up For Women spokesperson, says: “Jamey’s email came out of the blue this morning, so I called him to discuss his concerns and clarify our position. To Jamey’s credit, he heard us out, but still worried that the campaign was a ‘dog whistle’ for anti-transgender sentiment, as this is what he had been told by the small number of people who contacted him. It is exactly this type of mischaracterisation that we reject in the strongest terms. We are pro women’s rights and are calling for reasonable public consultation on a Bill, currently before parliament, that will impact these rights.”

Speak Up For Women’s posters simply state ‘Fairness. Consultation. Women’s rights to safety, dignity and privacy’ and there has been confusion around what exactly is transphobic about them.

Overseas, similar silencing tactics have been used by trans activists seeking to shut down the voices of women they disagree with. It is part of a concerning culture of no-platforming and bullying private companies with threats of lost business and media attacks.

“It is deeply concerning that a few phone calls from individual agitators intent on smearing our legitimate campaign is enough for a private company to take such drastic action,” says Ms O’Brien.

“It is crucial that when legislation is contentious like this we have robust discussions and democracy is allowed to work. Silencing tactics are underhanded and unacceptable. We call on those who wish to silence us to instead join us in discussion. We also call on our elected MPs to take control and facilitate these discussions.