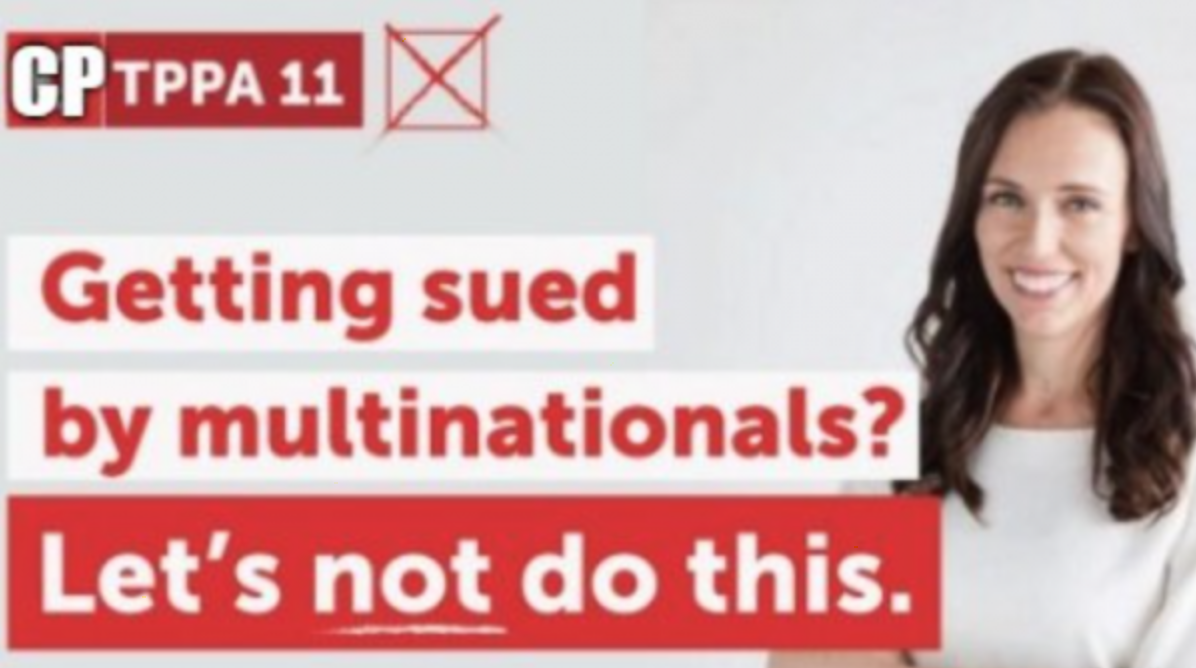 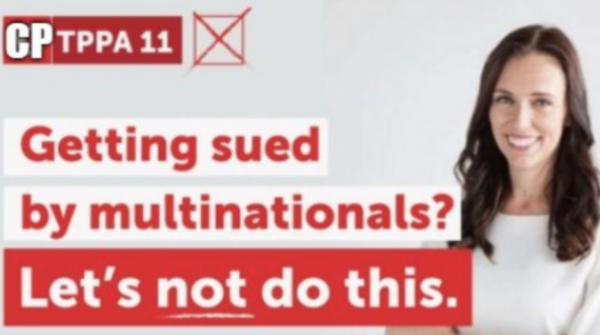 The first panel at the hui in October 2018  on What an Alternative and Progressive Trade Strategy for New Zealand Should Look Like was on the Big Picture, with an overview on foreign policy, labour and women’s perspectives. This exchange discusses gender and development.

Retired academic, founding member and global chair of Development Alternatives for Women in a New Era (DAWN) and active member of the Pacific Network on Globalisation

Laila Harré (chair) We’ve seen with free trade and investment agreements, including the most recent one NZ has signed up to, the CPTPP, that the issues around environment, tobacco, labour etc are increasingly referenced in the language of those agreements, and that is now expanding to include reference to gender. Most recently the 2017 WTO Declaration on Trade and Women’s Economic Empowerment states that – and this is pretty typical of how labour and environment have been addressed in the past too – that international trade and investment are engines of international economic growth in both developed and developing countries, and that improving women’s access to opportunities  and removing barriers to their economic participation in national and international economies contributes to sustainable economic development. How do you as a feminist critic of free trade and the current economic regime respond to these developments? Is it going to be enough to give women a cut of the action or is something more fundamental required?

Claire Slatter: I start by reminding us, in relation to this claim that free trade and investment is the engine of growth, that we were initially told that the private sector was the engine of growth. This was part of the selling point of structural adjustment policies, like rolling back the state, privileging private investors. As we have seen, that has led to an era of total corporate control. The worry now is really corporate control of states. We live in an era which DAWN has called a fierce new world, in which corporations are so empowered – and this is one of the major challenges.

The feminist critique of DAWN is really embedded in firstly a feminist critique from the South of structural adjustment programmes, which led us to the trade liberalisation agenda. Gita Sen has a quotation I like to cite where she said ‘structural adjustment programmes were the battering ram for trade liberalisation’. Basically they knocked down the walls and softened the ground for the end game of free trade. So this is essentially what has to be countered. We don’t look at it in ‘what’s in it for women’ terms of seeking equality with men in a free trade strategy. It’s about looking at what free trade has meant – dispossession, impoverishment for the whole of society, for the mass of ordinary people. Who has benefitted? They talk of women as the losers, but frankly the losers are the majority and the winners have been the 1% who have been so enabled to accumulate profits and wealth. This is one of the major crises of our time, the enormous, unprecedented levels of inequality. If it was shown on a graph you would see almost a flat line then rising almost vertically to show what the 1% controls in terms of wealth. The Oxfam statistics (was it in 2016?) revealed the eight richest people in the world owning the same as the bottom half of humanity, and we are talking about 3.6 billion people. That’s absolutely shocking. So that, together with corporate power and control, are the main issues that feminist critics of trade liberalisation have highlighted.

Just to get to the WTO’s declaration – this is all about giving a cut to whom? To a small minority of women entrepreneurs, essentially focused on micro, small and medium enterprises. It’s part of this whole thing that the private sector is the engine of growth. Private entrepreneurs amongst women – really they are going to make it? It’s nonsense, and the very strong critique of the declaration that was made by feminist organisations denounced it as such for that reason.

What has been seen with this language in trade discourse and proposed agreements has been described by Robert Bissio as a Trojan horse for bringing in new issues. For instance, e-commerce, which there’s a lot of controversy about from Southern countries. It is pushed with the argument that this is one of the barriers for women’s participation in business and offers a way of empowering women. Actually, the WTO Declaration doesn’t talk about gender equality, it talks about women’s economic empowerment. This is really capture of a concept that feminists originally spoke of. But our concept of ‘empowerment’ wasn’t about economic empowerment in this way, on the fringes of an extremely strong market economy driven by corporate forces. We talked about it as changing power relations in society. Giving women self-determination firstly over our own bodies. This goes much deeper to transforming gender relations and the kind of society and economy we have. It’s not about economic empowerment in this narrowed way of seeing women as potential entrepreneurs.

Laila: How does it feel to have language appropriated in that way? We’ve become used in the labour movement to appropriation of language as the justification for these agreements. But women are in a period where this is starting to happen. How do we respond?

Claire: In the analysis we’ve done, we’ve sought to address the dominant discourses and making a clear distinction between what we mean when we use these terms and how these terms are being misappropriated and turned to mean something else. The appropriation of language and concepts goes on all the time because it’s an opportunistic instrumental use of our language for their purposes. There’s something very powerful about the language. And it’s a way for them to bring some people on board. And there will be women who will see this as broadening opportunities for women, but they are a minority. When you think of the really damaging, impoverishing effects of free trade against that, it makes no sense for us to embrace this as opening doors to participate in the new economy.

Laila: The large countries of the South – Brazil, India, South Africa – are innovating new ways of being in economic relationships, especially rejecting investor-state dispute settlement (ISDS) for instance in the case of Brazil, or a new model agreement in India. Do countries that are traditionally in relations with large economic powers have to confront the world order in that way? What about Pacific countries for instance? For example, Fiji walked out of PACER-plus …

Claire – Pacific Islands countries are in a very different category. The one size fits all argument that free trade will be good for all economies doesn’t hold when you look at remoteness, disadvantage. Middle-income countries still have the largest numbers of poor people. There’s not much work that’s been done on inequality in the Pacific. Earlier work was done on poverty and poverty was basically denied. Instead we were talking about ‘hardship’ in the Pacific. Even Pacific people don’t like to think of themselves as poor – that’s for Asia and Africa, but not us. The stark reality is that poverty is very present. But what’s not being looked at is the degree of inequality that has developed over the past 20-30 years.

The way in which BRICS countries emerged, in particular China, India, Brazil, is also being talked about in terms of them no longer being developing countries. This is being seen as changing the geography of inequality and even the geography of development.  It’s interesting when you see discourses that are suggesting the world has changed, these countries are doing well, the growth and enlargement of the middle class, and in the Northern countries you are seeing the reverse. It’s hard to make sense of the world, but also of what changes may come from how changes between countries are being interpreted.

Laila: We heard this morning of the importance of trade prior to colonisation and the impact of colonisation on trade by indigenous people. The majority of world trade is now within multinationals and their supply chains. I wonder if we are still not talking about the real questions here. The reality is that most of these agreements are about protecting ultimately those corporate supply chains, whether they are Chinese, Americans or Europeans. How much do we really have to fear and how much is there really for us to lose from disruption of that system?

Claire: Even with PACER+, obviously it’s a trade agreement that will primarily benefit Australia more than NZ in terms of opening up markets for Australian suppliers of goods and services, and that’s already happening. The possibilities for suppliers from the Pacific to access the Australian and NZ markets are much more limited and the hurdles they would have to overcome are much more, such as the sanitary and phytosanitary rules or quarantine rules. The risks of those free trade agreements for Pacific economies are enormous, not just in terms of opening access to Australia and NZ through PACER+. Free trade basically opens economies to goods coming in from everywhere. It’s already very evident. We don’t have, for instance, the equivalence of an agency within Pacific countries to look at the quality of goods that’s on our shelves, for instance. We still have the problem of the supply to Pacific Islands states of the fatty offcuts from the meat industry, not only of Australia and NZ but also the US, turkey tails and all that kind of stuff. The impacts of that alone on the health of Pacific Islands is enormous.

We have investors coming in now and taking up land and producing food. There is a particularly controversial example in Fiji with a South Korean enterprise which is actually a religious or church group. There are concerns about its membership and how they may have been robbed of their life savings, and got behind this church-led enterprise. It’s doing very well in terms of setting up an octopus-like number of different enterprises. Very nice food outlets, which are being enjoyed, but you can see this kind of change taking place.

We see for instance much leasing of land, also in the tourism industry. There has been the opening up of land through liberalising land laws – not to make it possible to purchase land in the Pacific because customary ownership systems of land are still very intact and some of them are constitutionally protected. But they have found ways of long-term leasing and you have as good as lost it. This is particularly evident in Vanuatu, where being unable to buy back the improvements made on the land, such as a big hotel, make it nigh impossible. Capital comes in, produces goods for export. It is not local people who are necessarily benefitting from the opening of land, markets and investment opportunities. There are very definitely benefits to external and foreign investors. Other worrying likely developments in the Pacific in the very near future involve mining and the race for the oceans with deep sea mining, which a number of the Pacific Island states have a shared interest in as well.