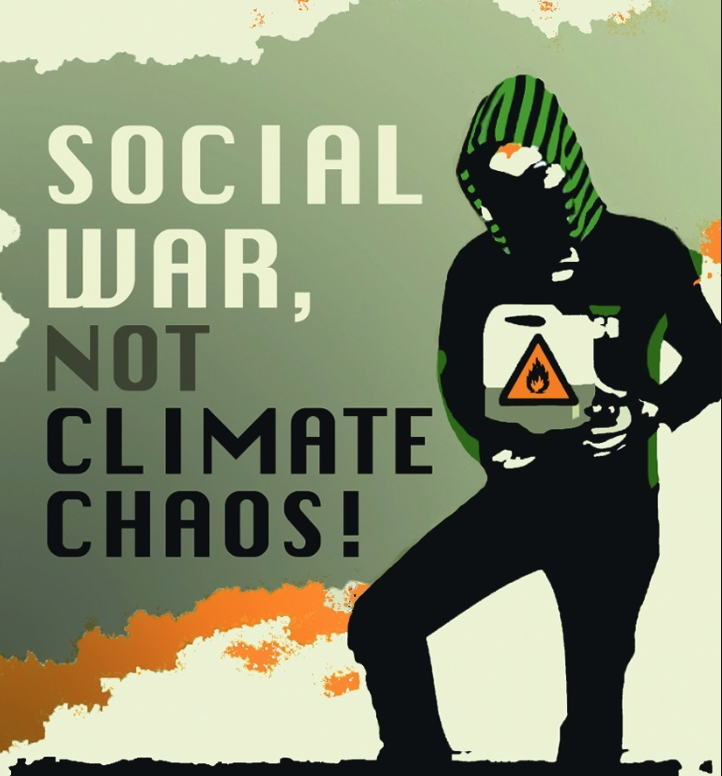 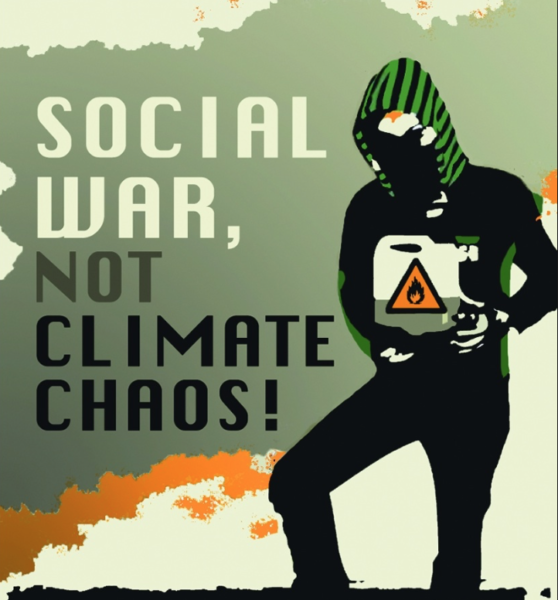 I think we need to be honest with ourselves.

Currently, the Greens & Labour seem to believe being carbon neutral in 32 years time is anything close to being a ‘solution’.

Currently policy makers, too frightened to accept the realities of climate change, still write policy within the neoliberal free market framework that is exacerbating the climate change catastrophe.

Currently one of the largest climate change gas emitters is running ‘Open Gate’ propaganda to try and pretend they aren’t the problem and are getting away with it.

Currently sweet fuck all is being done to prepare us for the adaptation we need to step up to deal with climate change.

The truth is that the vested interests that create the pollution and economic framework that is making climate change the catastrophe that it is will not do anything meaningful to disrupt their interests.

Unfortunately, we have run out of time to allow incremental change. I have followed the IPCC reports on climate change since their first one and the thing that is striking is that the worst case scenario is fast becoming the only scenario. What most don’t appreciate about the IPCC is that they are an incredibly conservative group and still don’t include many of the feedback loops that will make climate change faster and far more damaging, so when they say we have 10 years left to make the adaption, we are in far more danger than that claim suggests…

UN Says Climate Genocide Is Coming. It’s Actually Worse Than That.
Just two years ago, amid global fanfare, the Paris climate accords were signed — initiating what seemed, for a brief moment, like the beginning of a planet-saving movement. But almost immediately, the international goal it established of limiting global warming to two degrees Celsius began to seem, to many of the world’s most vulnerable, dramatically inadequate; the Marshall Islands’ representative gave it a blunter name, calling two degrees of warming “genocide.”

The alarming new report you may have read about this week from the UN’s Intergovernmental Panel on Climate Change — which examines just how much better 1.5 degrees of warming would be than 2 — echoes the charge. “Amplifies” may be the better term. Hundreds of millions of lives are at stake, the report declares, should the world warm more than 1.5 degrees Celsius, which it will do as soon as 2040, if current trends continue. Nearly all coral reefs would die out, wildfires and heat waves would sweep across the planet annually, and the interplay between drought and flooding and temperature would mean that the world’s food supply would become dramatically less secure. Avoiding that scale of suffering, the report says, requires such a thorough transformation of the world’s economy, agriculture, and culture that “there is no documented historical precedent.” The New York Times declared that the report showed a “strong risk” of climate crisis in the coming decades; in Grist, Eric Holthaus wrote that “civilization is at stake.”

If you are alarmed by those sentences, you should be — they are horrifying. But it is, actually, worse than that — considerably worse. That is because the new report’s worst-case scenario is, actually, a best case. In fact, it is a beyond-best-case scenario. What has been called a genocidal level of warming is already our inevitable future. The question is how much worse than that it will get.

As a result, the Earth Overshoot Day – which marks the point at which consumption exceeds the capacity of nature to regenerate – has moved forward two days to 1 August, the earliest date ever recorded.

To maintain our current appetite for resources, we would need the equivalent of 1.7 Earths, according to Global Footprint Network, an international research organisation that makes an annual assessment of how far humankind is falling into ecological debt.

…which leaves us with few options other than radical revolution…

The Earth is in a death spiral. It will take radical action to save us
It was a moment of the kind that changes lives. At a press conference held by climate activists Extinction Rebellion last week, two of us journalists pressed the organisers on whether their aims were realistic. They have called, for example, for UK carbon emissions to be reduced to net zero by 2025. Wouldn’t it be better, we asked, to pursue some intermediate aims?

A young woman called Lizia Woolf stepped forward. She hadn’t spoken before, but the passion, grief and fury of her response was utterly compelling. “What is it that you are asking me as a 20-year-old to face and to accept about my future and my life? … This is an emergency. We are facing extinction. When you ask questions like that, what is it you want me to feel?” We had no answer.

Softer aims might be politically realistic, but they are physically unrealistic. Only shifts commensurate with the scale of our existential crises have any prospect of averting them. Hopeless realism, tinkering at the edges of the problem, got us into this mess. It will not get us out.

Public figures talk and act as if environmental change will be linear and gradual. But the Earth’s systems are highly complex, and complex systems do not respond to pressure in linear ways. When these systems interact (because the world’s atmosphere, oceans, land surface and lifeforms do not sit placidly within the boxes that make study more convenient), their reactions to change become highly unpredictable. Small perturbations can ramify wildly. Tipping points are likely to remain invisible until we have passed them. We could see changes of state so abrupt and profound that no continuity can be safely assumed.

Only one of the many life support systems on which we depend – soils, aquifers, rainfall, ice, the pattern of winds and currents, pollinators, biological abundance and diversity – need fail for everything to slide. For example, when Arctic sea ice melts beyond a certain point, the positive feedbacks this triggers (such as darker water absorbing more heat, melting permafrost releasing methane, shifts in the polar vortex) could render runaway climate breakdown unstoppable. When the Younger Dryas period ended 11,600 years ago, temperatures rose 10C within a decade.

Politically we need a radical Green Socialist Party. The Middle Class Woke Identity Politics vehicle we have with the current Green Party is a sad joke that alienates more than it recruits. While they bicker  about reclaiming the word ‘cunt’ and deciding which pronoun to use for Trans gender rights, the planet melts. Building every Millennial micro-aggression into a war crime doesn’t do a fucking thing to combat climate change.

What few Green Party voters even recognise is that the current Green Party is built upon free market economics, so we need a new radical Green Socialism Party with one goal and one goal only – radical populist climate change adaption that utterly rejects neoliberalism.

The firs thing this new political movement needs is to lobby hard for a lower MMP threshold in the upcoming MMP referendum. MMP was supposed to be about growing political diversity, instead it has smoothed and suffocated our representation because the 5% threshold makes it impossible for fledgling political movements to gain state funding and build.

Secondly this new political movement needs a populist economic manifesto that rejects free market globalisation and neoliberalism, supports 5 year economic planning, invests in economic self sufficiency and seeks real independence and sovereignty by rejecting open door mass immigration, foreign sales of our water and foreign ownership of any NZ land. We need to rapidly increase our military budget and invest heavily in community self sufficiency. Under a rapidly warming world, mass climate change migration will become an obscene reality and New Zealand will be one of the few lifeboats left.

Thirdly, we need to entrench our own sovereignty with an upper house that is 50-50 Maori/Pakeha representation with a focus on retaining our independence against free trade hegemony and extend Parliamentary terms to 5 years so Government have an obligation to look long term instead of short term.

And finally,  this new political movement needs to be uncompromising in its insistence to face climate change on a war footing and refuse to allow the narrative to be dominated by any other issue.

This fledgling political movement needs to be supported by an equally radical social movement that uses small cell groups to plan social action that targets climate change polluters in a way that goes well  beyond Greenpeace.

It also requires inter-community self sufficiency…

Overall NZ strategy for climate resilience, based upon extra-parliamentary initiatives.

Those elements should be brought together under a framework for “local action and resilience”. The following priorities or initial thoughts could be part of such framework:

• Formation of an ‘Alliance for NZ Climate Resilience’, with local members and groups from all strata of life, operating beyond party boundaries.
• Establishment of a ‘NZ Climate Resilience Trust Fund’ for pooling of resources to support local and rural initiatives for climate adaptation and resilience.
• Climate awareness and action programmes evolving through Community Radio Stations and Mobile IT media.
• Implementation of a ‘Rural Kiwi Development Strategy’ with focus on diversified agriculture, fisheries, forestry, small and medium enterprises with low emission standards, vocational training in appropriate and adaptive technologies, conservation and sustainable management of local natural resources (water, soil, flora, fauna, land, land- and seascapes).

…so Green Socialists can either decide on radical direct action or community resilience.

When just 100 companies are responsible for 71% of global emissions, and when Oil Corporations knew about and hide climate change as far back as the 1990s we must acknowledge that those who have created and fostered the economic model that has allowed for this damage must be the first to pay for the adaption funding.

Oil companies must be sued for the damage they have caused the way Tobacco was sued over cancer.

That money needs to help fund the adaption.

A total rejection of neoliberalism and free market globalisation will be at the root of any economic agenda focused on self sufficiency and 5 year plans as opposed to quarterly profit margins.

The simple truth is catastrophic climate change will decimate any sense of a free market and the current dogma and belief system that props up free market mythology will implode upon its own lies.

Climate change and its impacts are far more dangerous than currently acknowledged and only a radical populist response can unseat the vested corporate interests that create the current political and economic inertia. As more and more climate events occur at faster and faster rates, voters will turn on the current hegemony, the question is who will harvest that anger and fear, the Left or the Right?