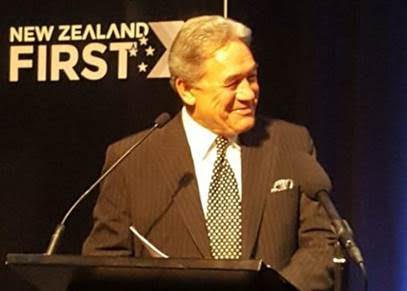 WHO WOULD HAVE THOUGHT that the most accomplished class warrior to emerge from the struggle to improve New Zealand’s labour laws would be Winston Peters? No one else with a dog in this fight saw the class issues at stake as clearly as Winston Peters and NZ First. Not the employers; not the unions; and certainly not the Labour, National or Green parties. Peters and his colleagues can walk away from this debate as the undisputed champions of small provincial business. The electoral consequences of NZ First’s decisive intervention should not be underestimated.

There is a strong temptation on the part of left-wing activists in the major metropolitan centres to write off the people of the provinces as a bunch of undifferentiated reactionaries. To your average Labour or Green activist, provincials are racist, sexist and homophobic “rednecks”. The sort of people who still see nothing wrong with sending a float filled with people in blackface down the main street of their little town. Hopeless and irredeemable, these voters are not worth wooing – unless you’re Stuart Nash. (And the less said about Stuart Nash the better!)

Winston Peters knows better. Like his predecessors in the Social Credit Political League, the NZ First leader is acutely aware that the small rural towns and provincial cities of New Zealand are hotbeds of class conflict. Not simply the classic Marxist conflict of capitalist versus proletarian, but also the no less bitter conflict between large and small businesses. Indeed, it is possible to characterise life in provincial New Zealand as a constant struggle of the particular against the general: of individual agency against institutional power.

People living in large cities have a bad habit of romanticising small towns. They like to think that in a place where everybody knows their neighbours life must be wonderful. The reality is almost the exact opposite. In a small community the social hierarchy is much more sharply exposed. Yes, everybody knows their neighbours – but they also know exactly where they sit in the social pecking-order. Fun, one imagines, if you are positioned at or near the top. Wretched, if you are located near the bottom.

The local lawyers and accountants, for example, are perfectly placed to know exactly how well, or how badly, their neighbour’s are doing. The town’s doctors and teachers are similarly well-positioned. If knowledge is power, then these provincial professionals have a lot to play with.

The senior managers of nationwide chains, salarymen who will not lose their houses if their executive decisions turn out badly, may look down their noses at the senior bureaucrats employed by local and central government but, in truth, their day-to-day jobs are distinguished by the same petty protocols; the same demands from above. Well remunerated, but subjected to unceasing “performance reviews”, many opt to take out their frustrations on those further down the totem pole.

Not that the owners of the town’s small businesses would include themselves among the pen-pushers’ inferiors. In their own eyes – and often in the eyes of their employees – they are town’s true heroes.

Independent of spirit, willing to have a crack, contemptuous of those whose only purpose in this world appears to be making the lives of people like themselves as difficult as possible, it is difficult not to admire these small businesspeople.

It is no mean feat to keep a business afloat in the provinces. Notoriously under-capitalised, they all-too-often keep their operations afloat by paying themselves less than their workers. They are no friend of the trade unions with their one-rule-fits-all approach, but neither are they friends of the banks who bleed them dry or the big firms who expect them to submit ridiculously low bids for the jobs they then take their own sweet time paying for.

But without these small business people the towns and cities of provincial New Zealand would die. Their absence is frighteningly easy to spot. Main streets are dead: their shopfronts boarded-up and the real estate agent’s “To Let” signs fading in the sun. The young people those shuttered businesses might have employed have either fled or broken bad. The only signs of life are around the local office of the MSD.

These are the towns NZ First is pledged to restore to economic health. Winston Peters and Shane Jones want those kids in jobs, earning money, dreaming of one day becoming their own boss – just like the man or the woman who took them on under the 90-day rule, to see whether they had what it took, and then employed them permanently when they proved themselves hard-working and trustworthy. The unions can knock on the boss’s door as often as they like – they will find few, if any, takers here.

Of course there are exceptions – but in small-town New Zealand it is more common to find the small employers and their workers united in solidarity against the people who live on the hill. It’s one thing to be paid by the taxpayers; to grow fat on the fees you charge; or draw the salary only a big corporation can afford to pay. It’s quite another to keep the town’s cars and trucks filled up and roadworthy; or to fill the bellies of its inhabitants with decent tucker. All those engaged in small businesses: both their owners and the people who work for them; have taken a bet on themselves. Very often that bet is lost. Fair enough. Making a small business pay has never been easy. All the players ask is that the game stays honest: that the deck isn’t stacked against them.

That is the pledge NZ First made to them – and that is the pledge it has kept. Wages are not always paid in cash. Sometimes they are paid in dreams. By honouring that currency, Winston Peters and NZ First have made the heroes of small-town New Zealand their own.