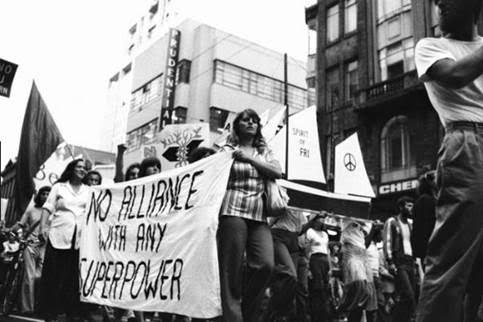 WHEN JACINDA ANNOUNCED she was having a baby, I was thrilled. What better guarantee could we have of serious government action on the big issues than a prime minister with a tiny and vulnerable child’s future to protect? Well, Neve arrived safely, but the urgent action required to secure her future seems as far away as ever.

I was seated in the Auckland Town Hall when Jacinda promised to make climate change her generation’s nuclear-free moment. Like everybody else I roared my approval. But where is the nationwide movement demanding change that matches the extraordinary activism and reach of the Nuclear-Free New Zealand phenomenon? The latter had a lively presence not only in every major city, but also in every sizeable town. The evidence was there for everyone to see as, one after the other, the councils of those towns and cities defiantly declared themselves nuclear-free. Many of those councillors were members of, or strongly supported, the Labour Party.

Just how embedded the nuclear-free movement was in the Labour Party is evidenced by the Fourth Labour Government’s unwillingness to stand in its way. No amount of internal resistance to Rogernomics was able to turn the Lange-Douglas Government from its course. But those same politicians were more willing to face the wrath of Ronald Reagan’s America than the New Zealand peace movement. All Labour’s President, Margaret Wilson, had to do was threaten to convene a Special Conference of the Party to reaffirm Labour’s “No Nukes” policy and the Cabinet rolled over.

But, on the calamitous issue of Climate Change, an issue with as much potential to lay waste human civilisation as an all-out nuclear war, there isn’t the slightest sign of a broad mass movement with the will and the power to force the Coalition Government’s hand. Nor is there the slightest evidence of a well-organised group within the Labour Party itself. No one’s willing to advance the cause of fighting Climate Change from either the stage or the floor of Labour’s annual conferences. In 2018, the members look to the top for inspiration and guidance. On Climate Change, however, they look in vain.

The other thing that’s missing is the sort of grass-roots anti-nuclear education effort that both complimented and drove forward the anti-nuclear movement. New Zealanders researched nuclear weapons and nuclear strategy both individually and in groups. Local libraries ordered in specialist literature. Activists organised public seminars. Voters learned about the futility of civil defence measures and shuddered at the threat of “nuclear winter”. The “experts” thrust forward by the government to justify the status-quo were answered by the peace movement’s own. Against an informed and active citizenry both the National and Labour parties found themselves politically helpless.

Within the Labour Party itself the rank-and-file membership could be given official encouragement to debate the best means of addressing Climate Change legislatively. What sort of laws does New Zealand need and in what order should they be introduced? A Special Conference could be called to assess the results and the news media invited to attend every session. The relevant ministers could be required to make themselves available for Q+A sessions. The whole event could be broadcast live on the Internet.

A prime minister determined to make Climate Change her generation’s nuclear-free moment could be doing all of this – and more. By the same token, however, a nation determined to “do something” about Climate Change has no need for guidance from above. The threat of an all-out nuclear exchange between the USA and the Soviet Union, a catastrophe from which no human-being on Earth would emerge unscathed, was all it had taken for hundreds-of-thousands of New Zealanders to commit themselves to making their country nuclear-free. Why, then, hasn’t the threat of the planet becoming uninhabitable by human-beings been enough to mobilise New Zealand citizens in the same way?

Does the answer lie in a simple lack of faith in the ability of any one person – any single generation – to make any kind of difference? When a left-wing populist government declines to keep its promise to oppose the TPPA. When a Green Party Minister of Conservation refuses to protect her country’s pristine water resources. What realistic hope is there then that people’s voices, people’s votes, can make anything like the difference made by the nuclear-free movement of the early 1980s? Have we entered an age when words and gestures are as plentiful as sparrows, but deeds as rare as Hector’s Dolphins?

When, on some unbearably hot day in the future, Neve asks her mother what she had to say about Climate Change, Jacinda will be able to answer: “Heaps!”. But, when her daughter follows-up her first question with a second; when Neve says: “That’s good, Mum, because everyone loved the way you talked. But what I need to know now is – what did you do?” How will Jacinda respond?