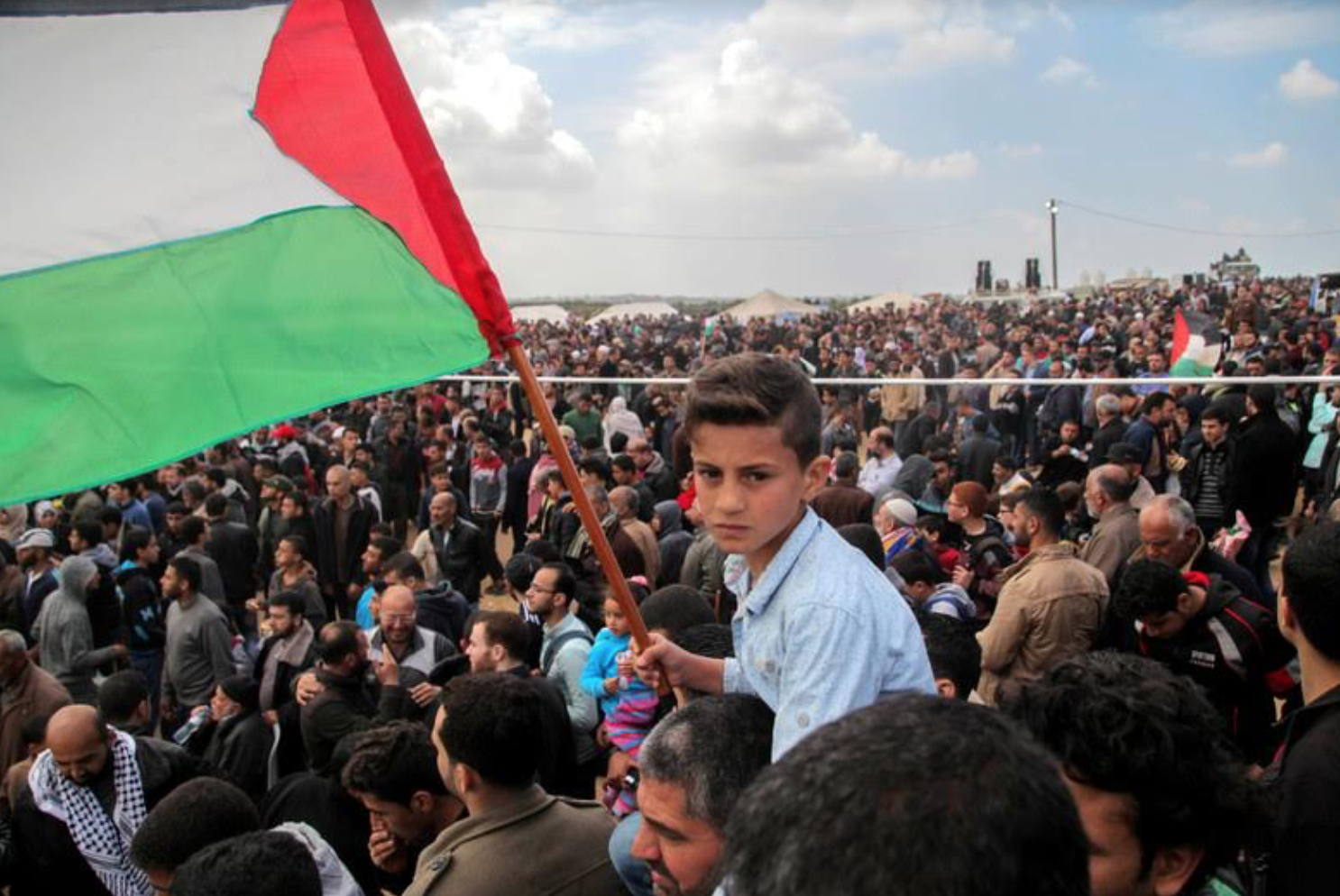 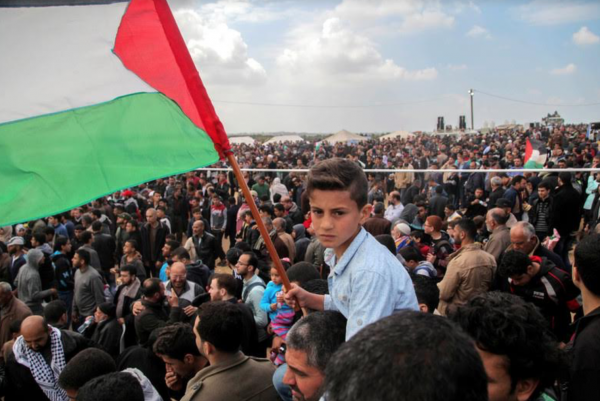 On 30 March 2018, Good Friday, thousands of unarmed Palestinians gathered to take part in a well-publicised, non-violent annual protest, known as the Great March of Return. The event commemorates the day in 1976 when the lives of six Palestinians were taken by Israeli forces for daring to protest in a general strike against 30 years of repression and dispossession.

In Gaza, at the end of March, thousands of families marched and gathered again. They marched to demand liberation and the right of return of Palestinian refugees. Over 70% of the Palestinian population in Gaza are refugees who, for 70 years, have been denied their right to return to their homes, land and villages. The explicitly peaceful nature of the march had been advertised well beforehand, but the Israel military engaged 100 snipers to terrorise the marchers. “The orders are to use a lot of force”, the Army chief told the Israeli Press. A Guardian article quoted Fatima Nasser (65), who said she had come with her seven children, all of whom were unemployed: “To die with dignity is better than living a life full of humiliation. We will return to our land, we will return to our homeland.” She added: “Israel kills us anyway, whether it’s by shooting or blockade”. Eighteen-year-old Mahmoud Younis said he had come to remind the world that we “deserve to live”, adding: “No one looks at us, no one thinks about us, we will continue to camp here and come daily until someone looks at us and there is a solution to this difficult and miserable reality.”

But the Israeli Army turned the day into what has been called Bloody Friday. As a result 18 Palestinians, including a teenager, died and 1,500 civilians were wounded, including over 150 children under the age of 16 (several of whom are now left with life-changing disabilities). One of the first Palestinians to be killed was 26-year-old Amro Samour, a farmer, recently married. Zionist propaganda, repeated by the mainstream news media, attempted to create an impression of violent Palestinians losing their lives in “confrontations” and “clashes”. But video footage shows the reality. Unarmed protesters were shot in the back and here are two videos, one of a Palestinian being shot in the back while carrying a tyre and another who was also shot in the back. TV3 Newshub’s 6pm programme broadcast both videos but, for some reason, stopped showing one of the videos a second or two before the fatal shot. On the same evening, TV1 declined to broadcast either video. Live cell-phone video, shot in various situations, including Israeli Army night invasions of family homes, are becoming a valuable weapon for Palestinians struggling to counter the mainstream news media bias in favour of Israel.

Adalah, a legal centre for Palestinian rights in Israel, condemned the Israeli Army’s use of lethal force as a violation of international law, stating that: “Live gunfire on unarmed civilians constitutes a brutal violation of the international legal obligation to distinguish between civilians and combatant”. The group also announced that it would launch an investigation to “demand that those found responsible for the killings be brought to justice”. The Zionist propaganda line tried to give the impression that the whole tragedy was due to Hamas ‘incitement’ but that was yet another of their lies. The Friday protest was in no way confined to the Gaza Strip – it was held in all of the Israeli-Occupied Palestinian territories and was organised with the agreement of all Palestinian groups, including Hamas.

In early February this year, the Israel Institute of New Zealand published an article entitled Is Marama Davidson a dogmatic street activist or serious Political Leader? Referring to Marama’s participation in the Gaza Flotilla protest, the article claimed that, by joining the Flotilla, she had “violated international law and another country’s sovereignty.” Marama was seized by Israeli forces in international waters, over which Israel has no authority, and to imagine that Israel has any sovereignty, either in international waters or over Gaza, is pure fantasy. Completely away with the fairies, the article’s author even took the Green MP to task for ignoring what the writer called “the booming Gaza economy.”

In January, a report by the Euro-Mediterranean Human Rights Monitor reminded the world that 65% of the families in Gaza live in poverty (among fishermen, the rate is 95% – see below for accounts of Israeli Navy hijackings of Palestinian fishing boats and constant armed harassment). With 97% of the water in Gaza unfit for human consumption, the Human Rights Monitor also reports that 72% of the Gaza population do not have enough food. See below also for reports of frequent Israeli Army incursions onto Gaza farmland and the bulldozing of crops.

The Israel Institute even tries to justify the Zionist regime’s West Bank military Occupation and its persecution of Ahed Tamimi and her family for daring to resist, by asking the question, “would New Zealanders find it acceptable for teenagers to flout the law and assault police officers or to incite terror?” As if the New Zealand Police were in any way associated with a belligerent, foreign military Occupation! But the article went even further, asserting that the “New Zealand Police are likely to have also arrested the young woman”. The Israel Institute appears to have little appreciation of this country’s values. Do the misleading propaganda and insulting remarks about Marama Davidson really reflect New Zealand thinking? Perhaps we should look elsewhere: “The Israel Institute works in partnership with leading academic, research, and cultural institutions to enhance knowledge and study of modern Israel in the United States and around the world. Founded in 2012 as an independent, non-partisan organisation based in Washington, DC and Tel Aviv.” The Israel Institute is actually led by its founding president, Itamar Rabinovich, who has served as Israel’s ambassador to the United States.

Gaza is under increasing attacks and incursions by Israeli forces, with a very real possibility that the next Israeli blitz of the territory is not far off. Particularly hard hit are Gaza’s sorely-needed fisheries and agriculture. Israel justifies its belligerence by claiming that its armed assaults and air strikes are merely responses to acts of terror perpetrated by those it calls Palestinian terrorists. If this were so, it would be reasonable to expect at least some measure of balance between the acts of violence of either side. The Israel Institute’s pathetic “booming Gaza economy” illusion is matched by another oft-repeated lie, used by Israel to justify its massive numbers of Gaza ceasefire violations: “Israel generally carries out limited retaliations to any militant provocations in Gaza.” The reality is quite different – as the following reports concerning Israeli and Palestinian Gaza ceasefire violations over the past three months, illustrate.

The first quarter of 2018 ended with Palestinian ceasefire violations over that period totalling 15. Of these, there were ten missile firings towards the Green Line, with the remaining five violations being acts of armed Resistance against the Israeli military. The final Palestinian missile launch for the quarter fell short of the border and crashed into the village of Juhur al-Dik.

The legal centre for Palestinian rights in Israel, Adalah, condemned the Israeli Army’s use of force on Land Day as follows: “Live gunfire on unarmed civilians constitutes a brutal violation of the international legal obligation to distinguish between civilians and combatants”. When will Israel be called to account?

Some examples of Israeli aggression carried out against Gaza over the first quarter of 2018:

Add to the above examples, 18 Israeli air strikes against a population with absolutely no means of air defence, and you see a shameful record of cowardly brutality that is beyond reason and civilisation.

Israel will not tolerate the slightest sign of protest or resistance, even the raising of a Palestinian flag on Palestinian territory invites furious responses from Israeli forces. At the end of 2017, a Palestinian man, Ibraheem Abu Thuraya, who had lost both legs in an Israeli air strike on Gaza, was shot and killed by an Israeli sniper for daring to wave a Palestinian flag in protest, while seated in his wheelchair. Two days after the Good Friday tragedy and in the face of worldwide outrage, Israeli Defence Minister, Avigdor Liebermann, defiantly asserted that the murder of 17 Palestinian protesters had been “necessary”. Both the United Nations chief, Antonio Guterres and the EU’s top diplomat, Federica Mogherini, have called for an “independent and transparent investigation” into the killings but the Israeli Defence Minister assured Israeli Army Radio that, with regard to a commission of inquiry — “there won’t be one”. Liebermann had reason to be confident because, on Saturday, the United States blocked a draft UN Security Council statement, presented by Kuwait, that called for an investigation into the use of live fire on defenceless civilians. This is all the more shocking when the premeditated nature of the killings was openly admitted by an Israeli Army spokesperson who bragged that Israeli troops “arrived prepared” and that “. . . we know where every bullet landed.”

Zionists claim to represent all Jews but an increasing number are finding this unbearably insulting. In the ideology’s early years, the majority of Jewry rejected Zionism. Following Israel’s Good Friday violations, the Deputy Director of the US-based Jewish Voice for Peace noted that: “The Israeli military evidently believes that any time Palestinians assert their basic rights in any way, they will be considered violent, and met with deadly violence.” Alissa Wise reminded us that 70 years of Palestinian dispossession and expulsion by the Israeli Government is too long and that is the “reason why 15,000 people were marching in the first place.”

Unconditional US support for Israel, together with the British PM, Theresa May’s witless loyalty to the Balfour Declaration, should tell us it is time for New Zealand to stand independently and demonstrate, both to the wider world as well as those who our politicians tell us are our ‘traditional allies’, that we feel just as does Alissa Wise when she says “I know in my heart that the right to peaceful protest is sacrosanct. It’s a truly beautiful thing. These protesters – people just like you and me – prove that there’s another way, one we have to recommit to today.” Say no to Zionism.