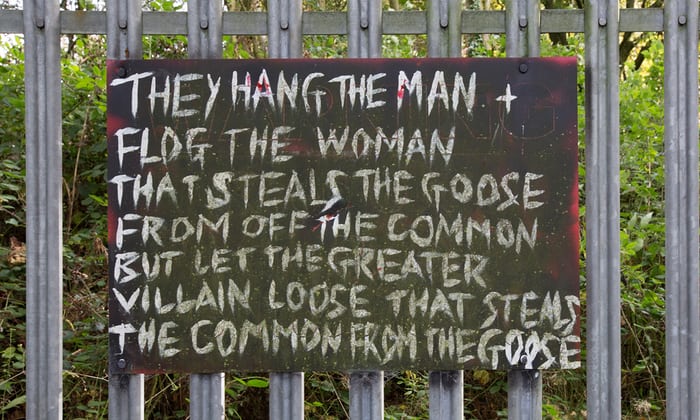 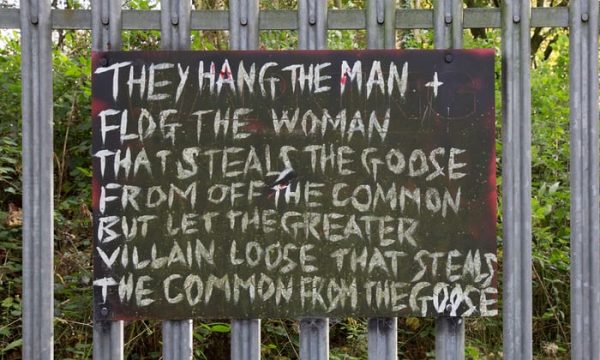 There’s a meme on the internet at the moment that references a poem from around 1764, that has obviously had relevance through the ages. ‘They hang the man and flog the woman that steal the goose off from the common, but let the greater villain loose, who steals the common from the goose…”. The poem has resonance for so much of the privatisation of global and national commons, whether it’s land, resources, fresh water or wealth.

But on the oceans, this ‘tragedy of the commons’ is also strongly expressed, and the ‘privatisation’ and creation of property rights from fish stocks could be one of the greatest travesties of all.
We have this reputation in New Zealand of being relatively free from corruption, and for having the ‘world’s best’ fisheries management system. But the fishing industry, and governmental decisions relating to it, show crony capitalism is alive and well, and despite nominal changes in those at the Parliamentary decision-making table, the force of industry and business weighs heavily and largely invisibly, behind the scenes on resource allocation, monitoring and enforcement.

It’s no coincidence that in this country we give knighthoods to people like Peter Talley who have made millions from mistreating workers, oceans and the environment, but the bulk of fisheries prosecutions are applied to recreational fishers often just hoping to feed their families. ‘Hang the man and woman catching fish for dinner’ but give knighthoods to the scoundrels emptying our oceans of fish and endangering species. Talley isn’t the only one of course, there’s ‘Sir’ Peter Goodfellow, from one of New Zealand’s wealthiest and most well-connected families, who is President of the National Party, and major shareholder, and Director of Sanford’s.

Maybe we expect collusion and corruption from the National Party – they are seen as the party of (big) business after all. But decisions from the new Labour-NZ First government also raise allegations of cronyism and conflicts of interest.

This is no abstract matter but affects the present and the future of ocean sustainability, food supplies, and marine biodiversity, in all too real a way. Even though there are ways of hiding, or fudging election donations, and four out of five donations are allegedly hidden, it’s clear from the public record that the most conservative current Ministers of the Crown, and those with official roles in the primary industries – fisheries, farming and forestry, are also those who have received the most (apparent) donations from business interests. Shane Jones, Damian O’Connor, Stuart Nash, have all received funding, from Talley’s and others for recent or historical election campaigns. Shane Jones also has interests in Te Ohu Kai Moana, Maori fishing operations.

There are reports and rumours that it’s Shane Jones himself who is asserting the most influence on Stuart Nash, Minister of Fisheries to ‘taihoa’ on the roll out of cameras on the New Zealand fishing fleet. Though ultimately, Stuart Nash and the Labour-led Government need to take responsibility for these delays. Even if Nash is just the mouth piece for Shane Jones and the fishing industry, Labour has lost a lot of credibility and goodwill among voters and supporters for proposing to take monitoring and observer coverage back beyond levels promoted by even the National Government.

Back in 2016 a leaked fisheries inspector’s report said inaction by MPI on fish dumping and hidden by-catch, was making matters worse. This was reinforced by the Heron Report into MPI’s failure to prosecute the dumping of undersize, non-target fish and Hector’s dolphins. MPI admitted that illegal fish dumping is so widespread that if the rules were properly enforced, half of the inshore fisheries would go out of business. Fisheries inspectors said between 20-100% of some quota fish are dumped in every trawl haul. Of 1500 registered commercial fishing vessels catching a reported 600,000 tonnes per annum, there have been just 28 dumping prosecutions since 2004. The bulk of prosecutions taken by MPI are against recreational fishers.

Before the election, the Labour Party and Stuart Nash said not enough was being done to address by-catch, affecting marine mammals like those now among the world’s rarest, Maui and Hector’s dolphins, New Zealand sea lions, and seals, as well as sea birds like albatross and penguin. They said the ‘relationship between the Ministry of Primary Industries and the commercial fishing industry was too cosy”. After the election, Nash says there’s not been enough consultation and the costs of electronic monitoring of the fishing fleet are too high. Sadly, those economic costs are nowhere near the costs of doing nothing, or too little, about the systemic abuse of sustainability limits for endemic species and fish stocks.

Seafood industry representatives say the sector is not in denial about their impacts on our oceans. They admit they ‘do have an impact on the marine environment, just as farming does on land…’. That’s not a commendation or something they should be pleased about given that rivers and streams and whole ecosystems have been damaged, maybe beyond repair, by farming. If that’s the standard of harm done by fishing industry pressures by their own admission, we’re in serious trouble. The added problem is of course, that on the ocean, it’s almost invisible.

That’s why robust observer programmes are essential. Sealord said they’re open for increased transparency, ‘there’s no cover-up’. ‘Putting cameras on vessels which the regulator has 24/7 access to, is the opposite of a cover up”. Sealord Chief Operating Officer Greg Johansson previously said ‘he looked forward to having cameras on all fishing vessels in the near future’. Except that now the Minister says he might cancel the camera scheme altogether; the regulator is notoriously captured by the industry; and the video monitoring analysis is to be carried out by Trident Systems, a fishing industry company (Gamekeeper and poacher much?).

Then of course, cameras can be turned off, obscured, footage might not be admissible in court. But when defending the scheme, the National Government argued even the deterrent effect was important. Similar schemes in Australia suddenly improved by-catch reporting, with a 700% increase in what was reported to match what was seen on camera. A camera trial in the Hauraki Gulf has been effective in making good progress to verifying by-catch and improving transparency.

Ministers have been under pressure to stop the electronic monitoring scheme, and to preclude public scrutiny of any images taken. Some commentators thought it was a win for conservation when Minister Nash said the video footage would still be public (while protecting privacy of individuals involved). However, Nash has outsmarted us all. If there’s no video monitoring, there’s nothing to see, and nothing to hide, problem solved. Moving right along….

In 2016, Stuart Nash proposed a ten-year moratorium on commercial fishing within waters 50m deep. He said the video monitoring programme needed to be rolled out more quickly, that the (National) government wasn’t doing enough. By 2017 after the formation of the Labour – New Zealand First coalition government, he has suggested doing away with electronic monitoring altogether and has proposed nothing credible or timely in its place. There are only physical observers on about 10% of the commercial fishing fleet at present, spread unevenly around the country.

There’s obviously stuff behind the scenes, power plays, trade-offs, conflicts of interests, fishy deals, that we may never see. But what’s the price of dolphin protection? Of species survival – whether Maui and Hector’s dolphins, penguins, sea lions, fish populations? Is it election donations, disclosed at only about $10,000 a pop, or is it something deeper and more insidious? Whatever it is, follow the money, it stinks.