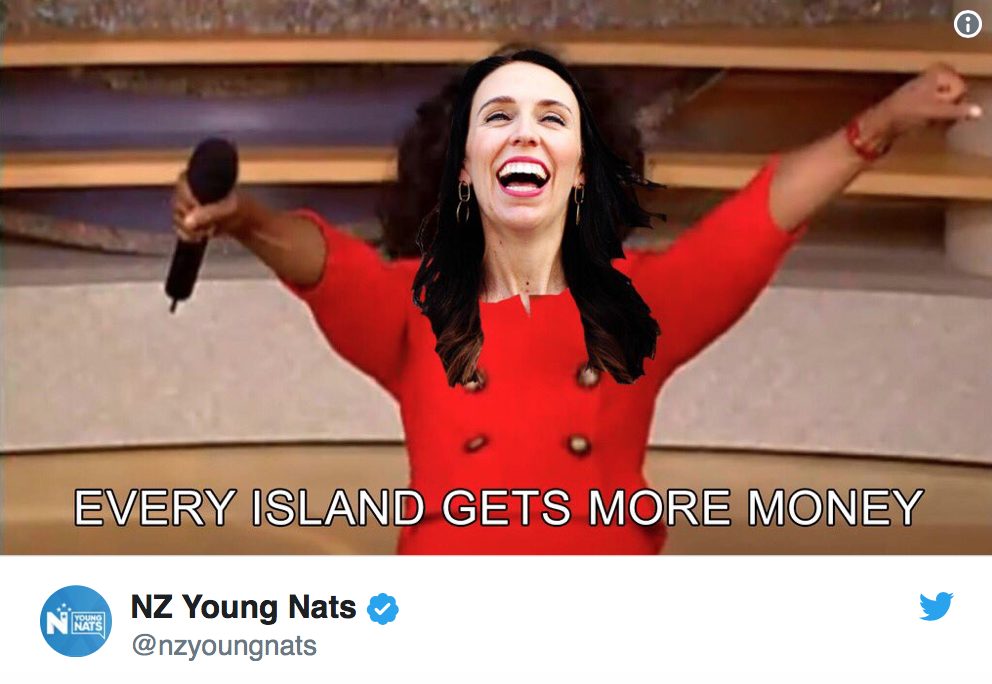 Whenever a bloody Newspaper references ‘Twitter Users’ as the source of a news story, it’s not a fucking news story.

I despise the Young Nats like any educated person should, but feeding the current media’s fetish for manufacturing a ‘news’ story out of some bullshit thing someone has said on Twitter is repugnant and it’s not journalism. 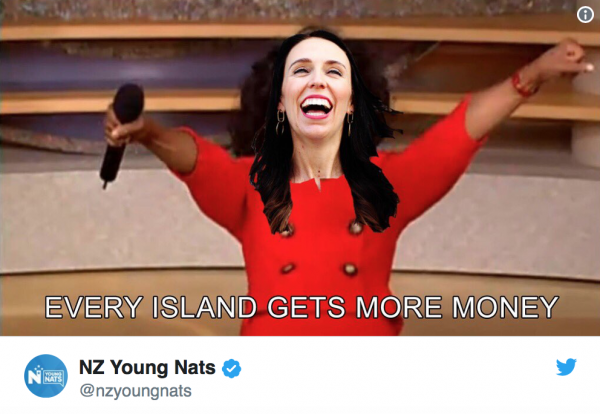 …FFS – the Young Nats weren’t being racist! Ignorant, bigoted and privileged, sure – but not racist!

Writing off a fairly harmless meme as ‘racist’ does two things.

1 – It shows how super snowflake fragile we are becoming in social media bubbles of perpetual outrage.

2 – It shuts down any real debate.

It’s the second one I’m interested in. We need to have a debate about our relationship with the Pacific because when a broadcaster as well known as Mike Hosking can manage to sound utterly ignorant in terms of why we have obligations and responsibilities to the Pacific, then many NZers must also suffer from that affliction.

Better than simply screaming ‘racist’ at the Young Nats, let’s actually hold up the facts and truths that make such a meme so disconnected from reality.

1: I think Mike that the Pacific is whanau to us, and with Auckland the largest Pacific Island city on the planet we have a unique kinship that must be celebrated and cherished, that’s why we should provide aid and support to them, because they are whanau to us.

2: Because the Pacific are whanau to us, it’s important not to be dicks to them Mike, like the way you are being right now.

3: NZ has done sweet fuck all to mitigate climate change in anyway meaningful (beyond our bullshit carbon free by 2030 crap), so when the worst edges of that pollution we have been pumping into the atmosphere damages cultures that have little hand in creating it, we have an obligation to do right by them because that’s a basic compassion and empathy most humans have. We contribute to climate change, climate change damages Islands in the Pacific, we help those island mitigate some of that damage with tiny payouts which don’t go anywhere near matching the enormity of what the developed world are plunging the developing world into. Why is that concept so difficult for you to understand Mike?

4: The fourth reason we want to keep them onside you stupid muppet Mike, is because the bloody Chinese have moved into our neck of the woods and are bribing every Pacific Island they can, and that we need to counter that influence with some clever tactics like Rugby Diplomacy and promotion of Journalism. That you seem to have made these comments about Pacific Aid with no comprehension whatsoever of the geopolitics that are being played out in the US-China Pacific Cold War is truly astounding for someone who is on the largest radio Breakfast show in the country. It’s like reviewing a movie by complaining how much the pop corn costs.What kind of moron are you?

5: And the 5th reason as to why we need to keep shelling money out to the Pacific Mike, the most important of the reasons? Because we, as New Zealanders are fucking arseholes Mike. We. Are. Fucking. Arseholes.

Let’s start with NZ incompetence in Samoa that saw the influenza pandemic come ashore and almost wipe out the entire Island or Black Sunday that saw NZ forces kill 11 Samoans. What about the way we brought Tongans into the country in the 1970s as cheap labour but when it was politically expedient start dawn raids to force them out? How about the fact that the Cooks, Niue and the Tokelau islands are actually still under control of NZ, which means we are responsible for them Mike? Are you even aware that they are free association states officially placed under NZ sovereignty?

…screaming ‘racist’ at the Young Nats for a meme that isn’t racist manages to eclipse the real issues and the substantive history of why we owe the Pacific.

Finally, to the grad students currently running the social media feeds of the corporate media news rooms that get manufactured into ‘journalism’, just because some Wellington hipster in your  twitter feed screams outrage at something, that isn’t news.