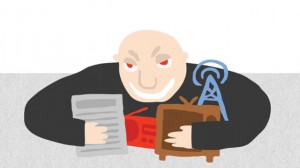 This year`s New Zealand Media Ownership report written by Merja Myllylahti and published by the Journalism, Media and Democracy research centre (JMAD) recounts how two attempted mergers failed. The Sky TV –Vodafone and NZME-Fairfax mergers were prevented by the Commerce Commission (in the latter case the aggrieved parties appealed the decision to  the High Court).

These events are of major importance for New Zealand citizens and consumers. A successful Sky-Vodafone merger would have allowed   the combined company to control mobile and broadband access to the premium sports content market. An NZME-Fairfax monolith would have controlled half of the commercial radio market , 90 per cent of daily newspaper circulation and most on-line traffic to and from on-line news sites( see TDB `One Party Media` June 1, 2016, TDB `Spin Off Outsmarted`  May 8, 2017).

Yet, amidst these developments the historical patterns of New Zealand media ownership were not openly discussed by politicians or journalists.

Indeed the entire matter is almost invisible to the general public. My purpose here is to explain how the very possibility of mega media mergers eventuated and why this has attracted minimal public attention.

Over that period the national media landscape was hollowed out by transnational corporations under a neoliberal policy regime instituted by Labour and National governments. The same was happening to the entire economic system although this was not recognised at the time. Before Labour`s July 1984 election victory there was a shift   from family to corporate press ownership, an expansion of private commercial radio and the formation of a semi-independent broadcasting system incorporating radio and television.

As of 1980 31 of the 33 daily newspapers were owned by Independent Newspapers  Ltd (INL), Wilson and Horton and New Zealand News. Corporate raider Ron Brierely had a four per cent holding in New Zealand News and purchased Hauraki Enterprises, a controlling shareholder of Auckland radio stations Radio Hauraki and Radio I.

From 1984 to 1987 the fourth Labour government deregulated the finance sector ,reduced tariffs and floated the New Zealand dollar. Corporate mergers and acquisitions thereby accelerated and the new media capitalists gained transnational connections. This became apparent in March 1987 when Rupert Murdoch`s Newscorp obtained 40 per cent of INL. During 1989 its holdings increased to 49 per cent.

In August 1990 the Commerce Commission approved a further expansion in Newscorp`s  INL holdings. Transnational patterns of cross-media ownership were enabled by the deregulation and commercialisation of broadcasting(1989),the entry of TV3 and pay television (1989) the sale of Telecom (1990) and the lifting of restrictions on foreign media ownership(1991).

Subsequently, TV3 was acquired by Canadian  media conglomerate Can West; Sky became controlled initially  by Time-Warner and Telecommunications Inc along with  Bell Atlantic and Ameritech (the latter two companies gained a controlling share of Telecom).

In 1996 Radio New Zealand`s 41 station commercial network was sold to a consortium of Wilson and Horton, the United States radio giant Clear Communications and APN News and Media. The latter company was part of Tony O`Reilly`s holdings in Australia and the United Kingdom. From 1995 to 1998 his newspaper group , Independent Newspapers Plc (later called Independent News and Media,or INP) assumed control of  Wilson and Horton, New Zealand owners of the New Zealand Herald. From there transnational media ownership developed an  Australian dimension .

In 1999  Newscorp controlled Independent Newspapers Ltd extended its media holdings into Sky television. In 2003 Fairfax Holdings paid NZ$ 1.88 billion for INL`s press and magazine titles. At that time Fairfax was Australia`s largest print and media group and was valued at A$10.2 billion. In 2006 the company paid NZ$ 700 million for Trade Me in order to increase its on-line holdings, exploit electronic commerce and to capture the migration of classified advertising to the internet. It is worth mentioning here the absence of legal scrutiny. A few major players were dominating domestic media markets when there was no media specific competition law.

Remarkably, this destruction of national media institutions along with the underlying structure of economic sovereignty did not meet sustained opposition. These fundamental changes were obscured by Labour`s 1984 election triumph, the demonization of the defeated Prime Minister  Robert Muldoon, the apparent consensus of the August 1994 Economic Summit and the entrepreneurial nationalism associated with  Michael Fay and David Richwhite`s KZ7 Americas Cup campaign. And, most crucially, the entire language of economics was colonised by the rhetoric of free markets and market forces.

New Zealand`s Keynesian, social democratic welfare state became  the relic of a discredited  past. This meant that there was no collective basis for defending the poor and marginalised. They were merely the casualties of necessary reform ,the government`s role was to help them help themselves. The free market colonisation of economic language was enabled by a mainstream media-communication  system whose various components were largely dependent on advertising  revenue, the commercialisation of news content  and the repatriation of profits offshore.

Matters did not substantially improve under the Labour led governments of 1999 -2008.

They believed that there was a `third way` between  the extremes of market liberalism and state interventionism . However, the plausibility of this policy course depended on newly coined terms such as `new social democracy`,`partnership` ,`innovation` and the `knowledge economy`. Meanwhile, our economic past was reinvented by a  narrative that described pre 1984 New Zealand as a fortress economy or Gdansk shipyard which needed radical overhaul .

The conflation of social democracy based on the rule of law with Eastern European one party statism was pure fantasy.  Yet, many former Labour politicians and  ministers still believe this.

From this point of view the related  issues of economic and national media sovereignty cannot be comprehended.

From 2008, with the election of a National government under John Key, reinventions of the economic past were no longer necessary.

The new Prime Minister exuded  a down-to-earth  non-political outlook devoid of any historical  memory.  His biographer John Roughan observed that ` Key is not a reflective man, given to dwelling on his own past or that of the country he governs. He is attuned to the present, trusting the  instincts that served him richly in foreign exchange markets and safely so far in government` .  Roughan further noted that Key had  `a currency dealer`s sure sense of the mood and movement of the market at the moment although he is less sure in his long term view`. The implication here is that the short termist culture of financial trading  fits the requirements of political leadership and that John Key`s attributes demonstrate this.

We now turn to the next step in my argument.

The general results have been  catastrophic for those committed to public sphere principles.

We have here an over bearing convergence of finance, political and media culture which obscures the issues of media ownership.

The Commerce Commission has stood against extreme manifestations of  ownership concentration on the grounds of media pluralism and democracy.

But what about the rest of our media environment?  Will Cabinet address the obvious shortcomings in media competition law? This would require some understanding of how transnational concentrations of  media ownership damage democratic principles and our national  identity.

Such an understanding is unlikely to be found among the Prime Minister`s `third way` Labour advisors.