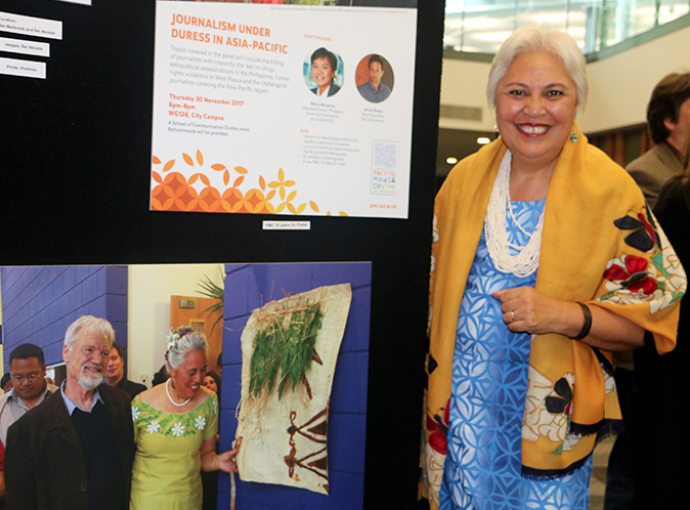 A video, Pacific Media Centre 10 Years On, by Sasya Wreksono.

The Pacific Media Centre kicked off its 10th anniversary celebrations this week with the launch of an investigative photojournalism book.

“We celebrate the launch of Conflict, Custom & Conscience. The book is an honest and moving account of some of the biggest issues in the Pacific region. It’s a fitting milestone to mark this important day,” Dr Yanıkkaya said.

The book, co-edited by Jim Marbrook, Del Abcede, Natalie Robertson and David Robie, features the work of 15 photographers throughout the Asia-Pacific region, from Gil Hanly to Russian photographer Vlad Sokhin, who have been involved with the PMC since its founding in 2007.

“It speaks to custom – the customary and indigenous world, while conflict defines a lot of news coverage in the area,” he said.

Marbrook explained the idea of “conscience” came through clearly on the part of the photographer.

Conflict, Custom & Conscience is also divided into four themes – culture, environment, women, and politics, protest and conflict – through which Marbrook hoped the richness of the region would come through.

“Hopefully it gives a window into women’s rights issues, climate change, and the intersection between traditional culture and modernity, which is really interesting in the Pacific,” he said.

Marbrook also hoped people would gain an insight into the region and be “charmed” by the photographs.

“Some of the photographs are quite horrific, but I’m hoping they can tell stories that don’t often come through in a couple of column inches in a daily paper. I’m hoping it will pique their curiosity and they’ll go and look for more images from these photographers,” he said.

Those gathered also honoured the work of PMC founding director Professor David Robie and the photography of Pacific Journalism Review designer and TOKTOK newsletter editor, Del Abcede, which was on display.

Luamanuvao Winnie Laban, who opened the PMC 10 years ago as Minister for Pacific Island Affairs, reflected:

“The spirit of the PMC is our ability to keep together and hang together. The reality is no canoe is on its own.

“The word Pasifika, the word Oceania, will tell you it is very important we honour that sacredness and connection that we have with each other, whether we are from Melanesia, Polynesia – which is Aotearoa New Zealand – and Micronesia.

“I particularly wanted to acknowledge Professor David Robie. For his vision and the team on the 10th anniversary of the launch of the Pacific Media Centre,” she said.

“Congratulations to your team and all of the beautiful frangipanis that you have developed that are now on our screens and on our radio.”

In the second part of the programme, the “Journalism under duress in Asia-Pacific”, Philippine Center for Investigative Journalism executive director Malou Mangahas spoke about the extrajudicial killings in the Philippines under President Rodrigo Duterte, and RNZ International senior journalist Johnny Blades talked of human rights and the media in West Papua.

The summit was chaired by PMC director Dr David Robie, who introduced the work of Pacific Media Watch and the issues confronting the region.