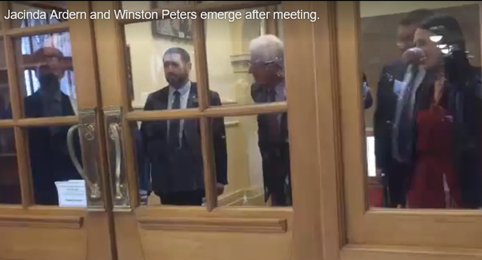 WHAT’S GOING ON, JACINDA? Why has the former Labour Finance Minister, Sir Michael Cullen, and Helen Clark’s former Press Secretary, Mike Munro, been invited on to your team of negotiators with NZ First? And, while we’re on the subject of Labour’s Rogernomics Generation, why was Annette King sent to ride shotgun alongside you for the duration of the election campaign?

These are important questions, because when Jacinda talked about ushering in “generational change”, most New Zealanders fondly assumed that she was committed to taking their country forward – not back.

The other assumption New Zealand made, as the baton of leadership passed from Andrew to Jacinda, was that she was completely up to the job of carrying it without assistance. We made precisely the same assumption about her senior team’s readiness to govern the country without “adult supervision”.

The September newsletter from “Positive Money” (a group dedicated to creating “a money and banking system that serves a fair, democratic, and sustainable economy”) may, however, give many Labour supporters cause to wonder whether any of those assumptions were justified.

In the newsletter, two of Positive Money’s stalwarts, Don Richards and Sue Hamill, describe a “surprising and somewhat disappointing” exchange of views with Sir Michael Cullen at an election meeting in Whakatane on Friday, 15 September:

I asked Grant Robertson if he was aware of what was happening in Japan with the Central Bank buying up a significant portion of their national debt. Inflation in Japan was close to zero and the real economy was thriving. Had he considered instructing the Reserve Bank to do the same, thereby saving taxpayers money for social and infrastructure projects?

Grant asked Sir Michael to answer the question and he said that Japan had been experiencing negative growth for some time and so the two economies were not similar. I reminded Sir Michael that the Japanese economy was now thriving and the Central Bank was still buying up their national debt. I was told that a Labour government would not be doing that.

Sue then asked Grant Robertson if he had thought about doing what the first Labour Government did in the 1930s, using the Reserve Bank’s balance sheet to fund the building of housing and infrastructure? The question received a few claps from the audience.

Sir Michael once again fielded the question. He said that we had to be fiscally responsible otherwise we could end up with an economy like Germany after World War One, Venezuela or Zimbabwe. Sue carried on with a second question stating that as private banks create most of the money in the economy, why not let the Reserve Bank do it as well. Sir Michael responded by saying the banks do not create money.

The meeting finished with an invitation to meet at a local café for a chat. We went home and printed off the Bank of England’s article and the IMF’s discussion paper that stated categorically that banks create money in the act of lending. Sue went back to the café and had a further conversation with Sir Michael. He dismissed the Bank of England paper as not relevant and that it did not mean that banks created money. He also dismissed the IMF paper saying that banks lend out people’s savings.

It was a frustrating experience and if Sir Michael has the ear of Grant Robertson, as he appears to have, then no difference will be made to the way our money is created, should the Labour Party come to power.”

When Richard’s and Sue’s report of this encounter was drawn to my attention, I responded with the following comment:

“That is the most alarming piece of intelligence I have received in the entire course of the 2017 election campaign. It is hard to distinguish which is the most dispiriting aspect of [the] report: that Grant Robertson cannot answer basic questions on political economy without reference to his mentor, Sir Michael Cullen; or, that Sir Michael’s grasp of these issues is as woeful as Don Brash’s (who also refuses to accept that banks create money). If this truly is the level of understanding in Labour’s senior ranks, then we are all – to use a technical political science term – fucked.”