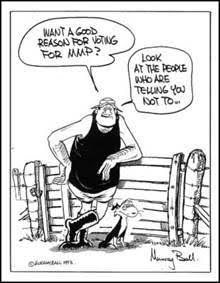 MUCH HAS BEEN WRITTEN about who “won” the 2017 General Election. Sharp differences have emerged between those who have judged the outcome as a clear National victory, and those who insist that Labour, with the assistance of the Greens and NZ First, has every right to anticipate forming a new government. In essence, this dispute turns on whether New Zealand’s political system is a straightforward creature of the Law, or something constantly emerging from the customs and practices of the people who inhabit it. I place myself among the latter.

In fairness to all the legalists out there, I must acknowledge that in terms of such formal constitutional conventions as New Zealand possesses (and there are surprisingly few) there is absolutely nothing to prevent the Labour Leader, Jacinda Ardern, from advising the Governor-General that she has negotiated an agreement with NZ First and the Greens which places her in command of a majority of the seats in the House of Representatives. Upon confirming that advice, the Governor-General would have no option but to invite Jacinda to form a government.

That Labour, NZ First and the Greens can do this is not in dispute. What is disputed, however, is whether such an agreement will be negotiated. The distance between “can” and “will” is vast – and filled with obstacles.

The greatest of these obstacles is the persistence of the electorate’s political memory. Although New Zealand has been conducting MMP elections for 21 years, the memories and expectations of voters old enough to have participated in elections conducted under the rules of First-Past-The-Post (FPP) continue exert a powerful influence on the public’s understanding of political events – as anyone who reads the Letters-to-the Editor columns will attest. The most persistent of these memories – that the party obtaining the most votes gets to become the government – is particularly tenacious.

Augmenting the electorate’s persistence of memory, is the enduring resentment of those New Zealanders who have consistently voted to retain and/or restore the FPP system. A substantial minority, around 40 percent of the electorate, emphatically rejects the idea that New Zealand is well-served by proportional representation. These citizens remain firmly wedded to the simple plurality, single-member constituency, system of electing members of parliament. Among such voters, the legitimacy of the MMP system’s Party lists and List MPs continues to be hotly contested.

Even among those who support MMP, considerable confusion still exists as to the relative importance of the Party Vote and the Electorate Vote. Among voters there is a widespread misapprehension that Members of Parliament elected to represent their local communities deserve higher status than MPs elected off a Party List the public had no part in drawing-up. The key role of the Party Vote in determining the outcome of a general election continues to elude many voters.

It is tempting to argue that, when determining the political future of the country, the misapprehensions and ignorance of ordinary voters should not be accorded any special weight. Certainly, our electoral legislation makes no such allowance. If electors allocate their two votes according to the mistaken assumption that their Electorate Vote counts for more than their Party Vote, then that’s just too bad. They should have paid closer attention to the Law.

Unfortunately for the legalists, New Zealand’s politicians cannot afford to be so definitive. Our political leaders know that while the Electoral Commission must operate according to the strict rules of the Electoral Act, their own operations will be guided by those the electorate assumes to be in force. These DIY electoral rules have grown out of the custom and practice of the politicians whose job it has been, since 1996, to make MMP work. In making these political choices, our leaders have paid considerably more attention to what the voters think they should do, than to what the constitutional conventions laid down in the Cabinet Manual actually empower them to do. In doing so, they have created a whole new set of “unofficial” conventions.

The most important of these is that the party winning the most votes, and taking the most seats, must be allowed to form a government. To say this represents outdated FPP thinking is true – but irrelevant. Most New Zealanders balk at the prospect of being ruled by a “coalition of the losers”. In their minds, a plurality is as good as a majority – and that “majority’ must rule. This widely-held (albeit completely erroneous) view of electoral best-practice leads the voters inexorably on to the next-most-important convention: that it is the duty of whichever small party is best positioned, ideologically and practically, to do so, to supply the largest party with the votes it needs to give New Zealand “strong and stable” government.

The fact that the voters have got it all wrong is nowhere near as important as the fact that they believe themselves to be right. After all, this is how all previous MMP governments have been formed, and a consistently large majority of voters are firmly of the view that this is how the next MMP government should be formed. Perhaps the best way of describing New Zealand’s DIY electoral system is: MMP with FPP characteristics. It may not have the slightest justification in either law, or the officially-defined constitutional conventions, but woe betide any politician who sets his, or her, face against it.