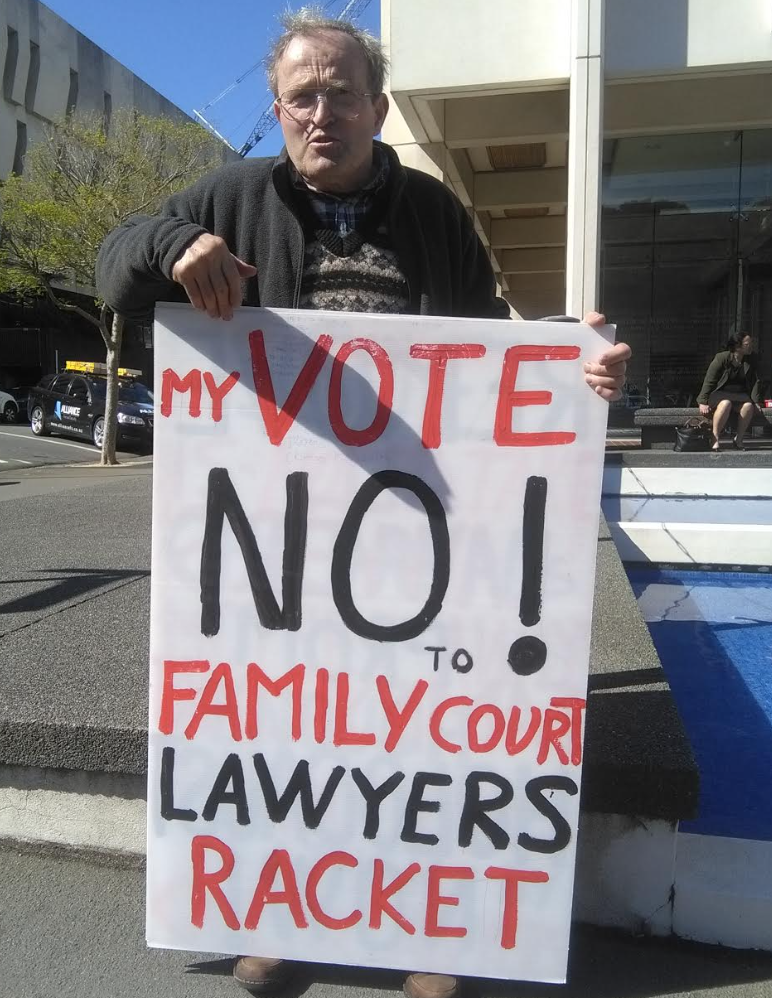 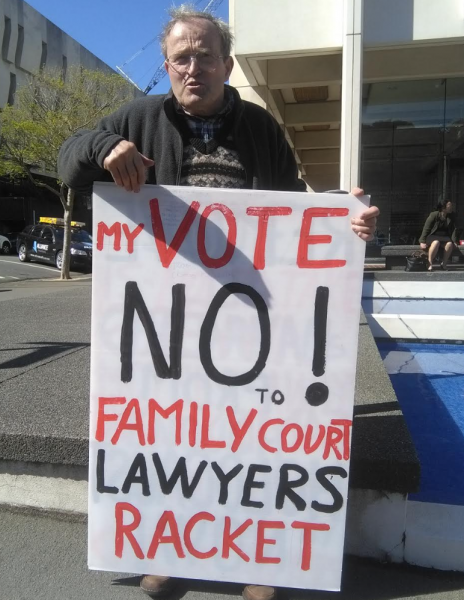 “Sid, the man who would set himself alight on Parliament front lawns. His Story.”

I had been filming at a Anti-Meth rally on Parliament Grounds on Wednesday when I saw this man with a placard standing outside High Court on Molesworth Street. I thought I would go over and see what it was about. The sign he was holding is the first one in the series of photos. I asked him what his sign was about? He told me his story, how he was separated from his wife and teen children, and was going through family court. How he felt frustrated at the system and didn’t feel listened to. He had been lone protesting for several days before I met him and he felt this was the only way he could get heard. I asked to take a photo of him with his sign. He then wanted me to take photos of him with other signs which I did. I shook his hand and told him I wished him the best of luck with his family, then I carried on, to be honest I wondered how I would use those photos.
When I saw the news of the man who set fire to himself, and I saw the sign he had, looking the same, I was surprised and shocked and knew it was the man I met the day before.
I posted the pictures I had taken of the man on my Facebook Page asking If anyone knows him or of him can you please help us to tell his story, and got a massive response as his story resonated among many dealing with loss and family court. There is alot of anger and hurt out there.

Several people private messaged me as they only found out where he had gone and what happened after the pictures posted on Facebook, they wanted his story told.

One person who knew of him said, “he was a lovely guy who had his own workshop on Sunset Rd, Rotorua. He packed up his workshop and closed his accounts just over a week ago and wouldn’t tell anyone where he was going”

Another who saw him often said, “I never saw him as a man who would ever be pushed so far to reach breaking point, he was not one to be pushed around he fought for what he believed in and its heart breaking to know he died the way he did because that is the only way he thought people would listen.”

He is Czech-born mechanic Zdenek (Sid) Hanzlik, confirmed by both ladies who knew him and privately contacted me. He owned F.H. Autoservice Ltd, Sunset Rd, Rotorua which he closed up a little over a week ago and set his affairs and accounts in order. In 2009, His Japanese wife and their two children moved to Japan and left him to sell the business and join them later. Things didn’t go to plan and years later he was in a custody battle over access with his now teenage children, most recently having a S133 report done on him by CYFS, these reports are notorious for its drawn out process.

He was lonely, frustrated at the Family Court System and didn’t feel listened to. Lets not make this about a mum or a dad story, but focus instead on levels accountability, how heresy in family court is an acceptable bar for evidence. You certainly wouldn’t expect it in criminal court. There is a mental health aspect to this story and people will question his stability, and understandably so. By all accounts Sid was a sane, if not stoic individual who deeply suffered loss of contact with his children in a system that would make anybody go mad, and does. When you take away everything from a person they will do one of two things, Kill others or Kill Themselves.

Sid emigrated to Britain in 1987, was a qualified marine engineer and mechanic, and gained New Zealand residency in 1991. He bought the garage in 2000, after having worked there briefly in 1992. He wasnt very well known, but those who did know him respected him and today are in shock.

The person who sent me this link said that, “This was Sid to a T”.

Karl Pearce BSW (Hons.). has been a political commentator and activist in and around Papaioea Palmerston North, New Zealand for 15 years with the last 8 in both student and community radio. Karl currently produces and hosts his show ‘On Point w/ Karl Pearce’ on Access Manawatu which is a political, current affairs radio show. Karl is academically published and intermittently blogs. If you want to know more about Karl you can find him at www.Karl.Kiwi.nz